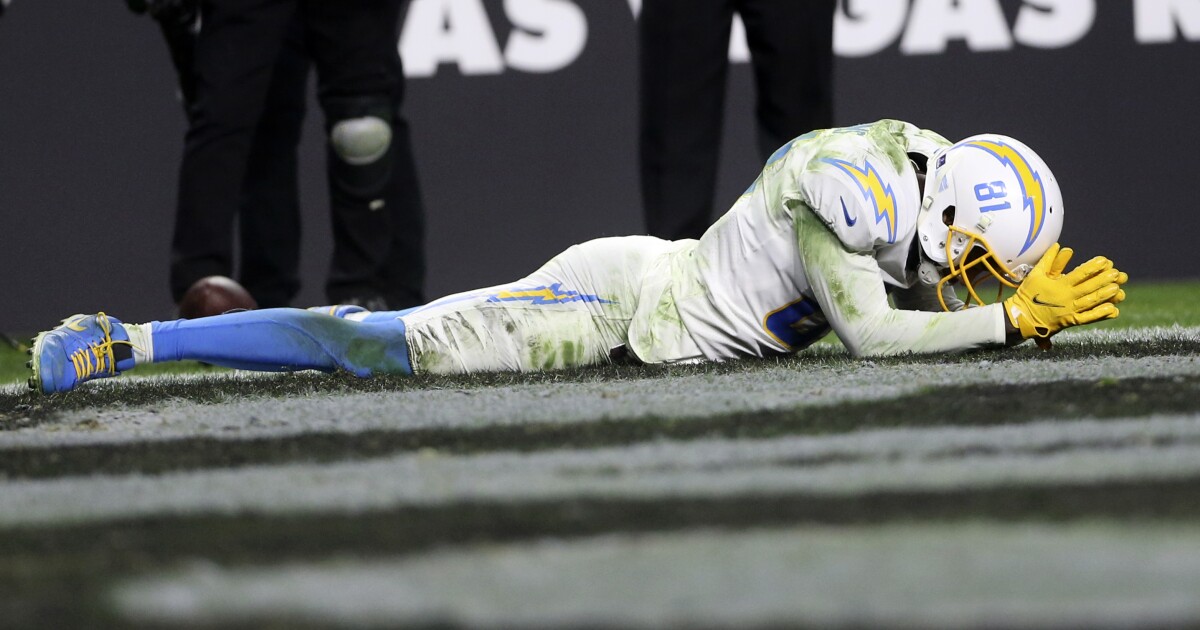 The Chargers would be delighted with that tie now.

In a game they simply could not lose and still advance to the playoffs, the Chargers lost Sunday to the Las Vegas Raiders 35-32 in overtime.

The defeat ended their season at 9-8 as they dropped three of their final four games to miss the playoffs for the third consecutive year.

Entering Sunday, the Chargers would have moved on with a win or a tie. In fact, given Indianapolis’ loss earlier in the day, both the Chargers and Raiders would have advanced with a tie, that odd scenario sparking much discussion around the league in advance of the kickoff.

Nearly four hours later, the exact possibility unfolded inside an Allegiant Stadium that felt both electric and breathless throughout the night.

After tying 29-29 through regulation, both teams kicked field goals on their first possessions of the extra session.

The Raiders then took over at their 25-yard line with 4:30 to go. Las Vegas picked up two first downs while advancing into Chargers’ territory the two-minute warning arrived.

The Raiders then ran the ball twice from just across midfield as it appeared both teams were content to allow the clock to run.

But after the second play, as Las Vegas was lining up, the Chargers called a timeout. Thirty-eight seconds remained.

Afterward, coach Brandon Staley said he stopped the clock to get the proper run defense on the field.

“We needed to get in the right grouping,” he said. “We felt like they were going to run the ball. So we wanted to … make that substitution so that we could get a play where we would deepen the field goal.”

That plan didn’t work out. On third and four from the 39, the Raiders converted on a 10-yard run by Josh Jacobs, making a tiebreaking field goal a much more viable option.

Las Vegas let the clock run down to two seconds, called a timeout and summoned kicker Daniel Carlson. His 47-yarder broke what would have been a triumphant double tie.

So, just like that, a historical NFL regular season — 17 games over 18 weeks — ended in a fashion almost hysterical.

Only the Chargers were not laughing. The loss ruined what had been a miraculous night for Justin Herbert and an offense that just refused to go down despite repeatedly facing their potential final shot.

Trailing 29-14 with under five minutes in regulation, the Chargers forced overtime with a pair of long touchdown drives that included numerous highlight moments.

The first drive covered 75 yards in 14 plays, the last of which was a 23-yard touchdown pass from Herbert to Joshua Palmer on fourth and 21.

The second covered 83 yards in 19 plays and featured three fourth-and-10 conversions, including one by a Raiders penalty. Herbert hit Mike Williams for a 12-yard score as time expired. Dustin Hopkins’ extra point made it 29-29 to force overtime.

Herbert, despite facing pressure that saw him sacked three times and hit on seven other occasions, finished 34 of 64 for 383 yards and three touchdowns. He threw for 20 first downs.

Williams caught nine passes for 119 yards as the Chargers rolled up 440 yards of total offense.

The Raiders won the overtime coin toss, took the ball and picked up two first downs while driving to the Chargers’ 25-yard line.

A 31-yard completion to Jared Cook to open the Chargers’ ensuing possession was nullified by an illegal man downfield penalty on left guard Matt Feiler.

But the Chargers rallied with Herbert extending the drive with a 47-yard completion to Williams over the middle on fourth and nine. After a short Austin Ekeler run and two incompletions, Hopkins kicked a 41-yard field goal to make it 32-32.

The Chargers finished six for seven on fourth down, compared to four for 18 on third down.

The Chargers’ lone failed fourth down was a memorable one. On their second possession of the third quarter, they turned the ball over on downs when Staley decided to go for it on fourth and one from his team’s 18-yard line.

Herbert handed off to Ekeler who lost two yards when he was smothered by Darius Philon and Roderic Teamer, a pair of former Chargers.

After falling behind 10-0 in the game’s first 12 minutes, the Chargers rebounded to take a 14-10 lead with a pair of extended drives on their next two series, both ending in touchdowns by Ekeler.

But the Chargers failed to get to halftime with the advantage. They allowed the Raiders to go 75 yards in seven plays to go up 17-14 on a one-yard run by Jacobs in the final minute.

“I’m disappointed because I feel like we’re one of the best teams in NFL,” Staley said. “I feel like this team is good enough to not only be in the tournament, but to win it.”

Denial of responsibility! NewsUpdate is an automatic aggregator around the global media. All the content are available free on Internet. We have just arranged it in one platform for educational purpose only. In each content, the hyperlink to the primary source is specified. All trademarks belong to their rightful owners, all materials to their authors. If you are the owner of the content and do not want us to publish your materials on our website, please contact us by email – [email protected]. The content will be deleted within 24 hours.
best sports newschargershopesLossnews update sportsnewsupdateovertimeplayoff