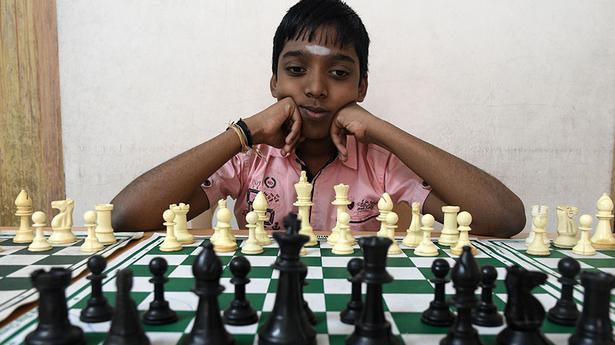 Chinese world No.2 Ding Liren seized the advantage against India’s Grandmaster R Praggnanandhaa in the final of Meltwater Champions Chess Tour Chessable Masters online tournament, taking a 2.5-1.5 lead after the opening day of the match early on May 26.

The 16-year-old Praggnanandhaa, who lost the opening game of the all-Asian final, bounced back strongly to level the first match when he won game two.

Liren then showed why he is rated so highly by taking the lead, outwitting his young Indian opponent, who had on Wednesday appeared for his standard XI examination, in the third game.

The fourth game saw the two players sign peace in 39 moves as Liren took a one- point advantage into day two of the summit clash.

The second day of the final will also feature four games and the tie-break if required.

Praggnanandhaa has been in good form during the tournament and had created a flutter in the preliminary phase by beating world No.1 Magnus Carlsen in the sixth round. He had finished fourth in the preliminaries behind Anish Giri, Carlsen and Liren.

Denial of responsibility! NewsUpdate is an automatic aggregator around the global media. All the content are available free on Internet. We have just arranged it in one platform for educational purpose only. In each content, the hyperlink to the primary source is specified. All trademarks belong to their rightful owners, all materials to their authors. If you are the owner of the content and do not want us to publish your materials on our website, please contact us by email – [email protected]. The content will be deleted within 24 hours.
advantagebest sports newschessChessablechessable masters finaldingDing Lirenfinal