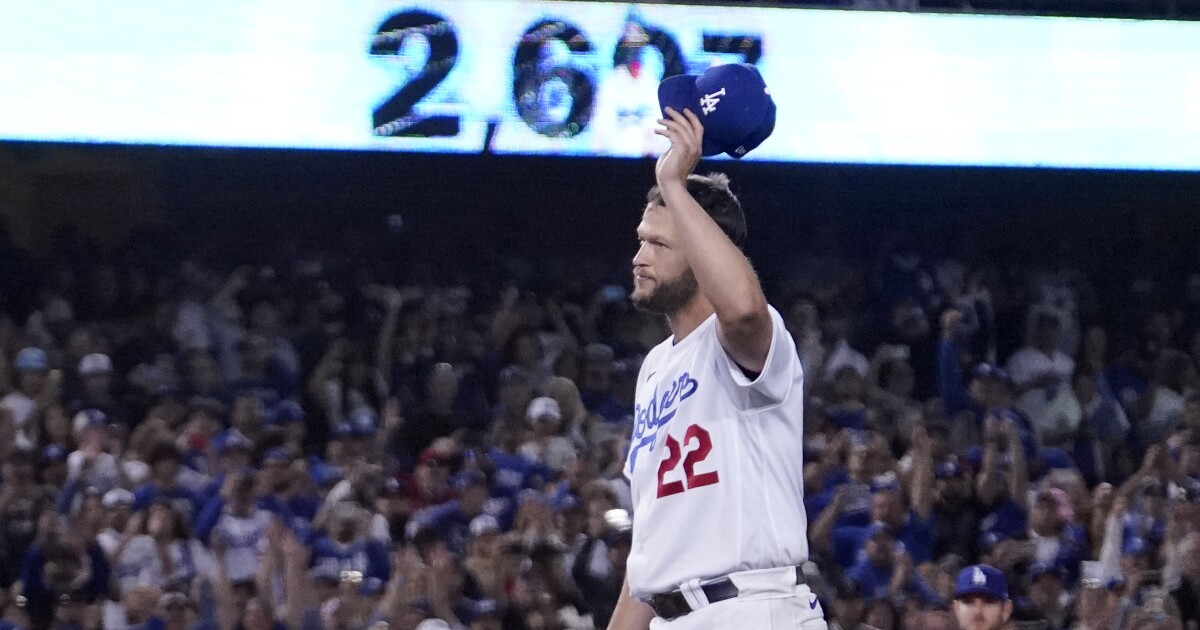 But that was about all the Dodgers had to cheer, as they fell behind after Kershaw left the game and lost to the Tigers 5-1.

Torkelson’s weak swing and miss, Kershaw’s fourth strikeout of the night, brought the Dodger Stadium crowd of 52,613 to its feet for an ovation while Kershaw circled around the mound, then doffed his cap to the fans, seemingly anxious for the game to resume.

Yet for a moment Freddie Freeman, the Dodgers first baseman, couldn’t help but feel for Torkelson.

After contributing nine strikeouts to Kershaw’s record total while playing for the Atlanta Braves, Freeman knows it’s a lot better to be standing at first base than in the batter’s box when Kershaw is pitching.

“That was not a fun at-bat,” said Freeman, who faced Kershaw 28 times. “When you get in the box, you realize how good he is. I’m glad I don’t have to face him anymore.

“Every pitch means something to him. That’s the key. He doesn’t throw any non-competitive pitches.”

Or many hittable ones.

The record came on a sharp 0-and-2 slider that dove down and in on the right-handed Torkelson, who reached for it and missed for the first out of the inning. That moved Kershaw past Sutton’s total of 2,696 strikeouts set in 1988, the final season of a 23-year career spent mostly with the Dodgers.

Kershaw struck out the side in the inning and finished with seven strikeouts in six innings, becoming the 26th pitcher in big-league history to reach 2,700 for a career.

Two months ago, it wasn’t certain whether Kershaw would be pitching for the Dodgers this season, much less breaking records. The three-time Cy Young Award winner became an unrestricted free agent after last season and didn’t re-sign until early March, when he agreed to a one-year, $17-million contract.

“Clayton wanted to come back here only if we valued him as a top-tier starter,” manager Dave Roberts said. “For us to take a good look and give him every opportunity to come back here was a smart move. He’s one of the greatest Dodgers to ever put on a Dodger uniform.

The Dodgers gave Kershaw some early support, with Mookie Betts lining a homer over the wall in dead center in the first. But the Tigers matched that in third. Kershaw retired the first eight batters — three on strikeouts to match Sutton’s record — only to see Detroit score on a two-out double, a walk and a run-scoring single from Javier Báez.

After giving up a single to start the fourth, Kershaw struck out three of the next four Tigers to pass Sutton and regain control. Kershaw gave way to Evan Phillips in the seventh, an inning the right-hander opened by hitting the first batter and giving up a single to the second. Two out later Báez doubled in the go-ahead run before a broken-bat single from Austin Meadows drove in two more.

An infield single and Tucker Barnhart’s RBI double in the eighth made it 5-1.

A Hall of Famer who won 324 games, Sutton still holds Dodgers records for victories (233), innings pitched (3,8161/3) and shutouts (52), totals that Kershaw, in his 15th season with the team, has little chance of matching. But that has less to do with Kershaw’s brilliance than it does with the way the game has changed, with starters throwing fewer pitches and innings.

Sutton averaged more than 238 innings in 16 seasons with the Dodgers, a number Kershaw has never reached. And the Dodgers as a team haven’t matched Sutton’s shutout total since Kershaw entered the majors in 2008.

Strikeouts also have become more common. In Sutton’s first season in 1966, there were 18,805 strikeouts. By Kershaw’s rookie season that number had nearly doubled.

“This guy is first-ballot Hall of Famer,” he said of Kershaw. “He does everything for a pitcher to win. All these things that change in the game, I don’t even pay attention to it.”

Denial of responsibility! NewsUpdate is an automatic aggregator around the global media. All the content are available free on Internet. We have just arranged it in one platform for educational purpose only. In each content, the hyperlink to the primary source is specified. All trademarks belong to their rightful owners, all materials to their authors. If you are the owner of the content and do not want us to publish your materials on our website, please contact us by email – [email protected]. The content will be deleted within 24 hours.
best sports newsbreaksClaytonDodgersKershawLossnews update sportsnewsupdate