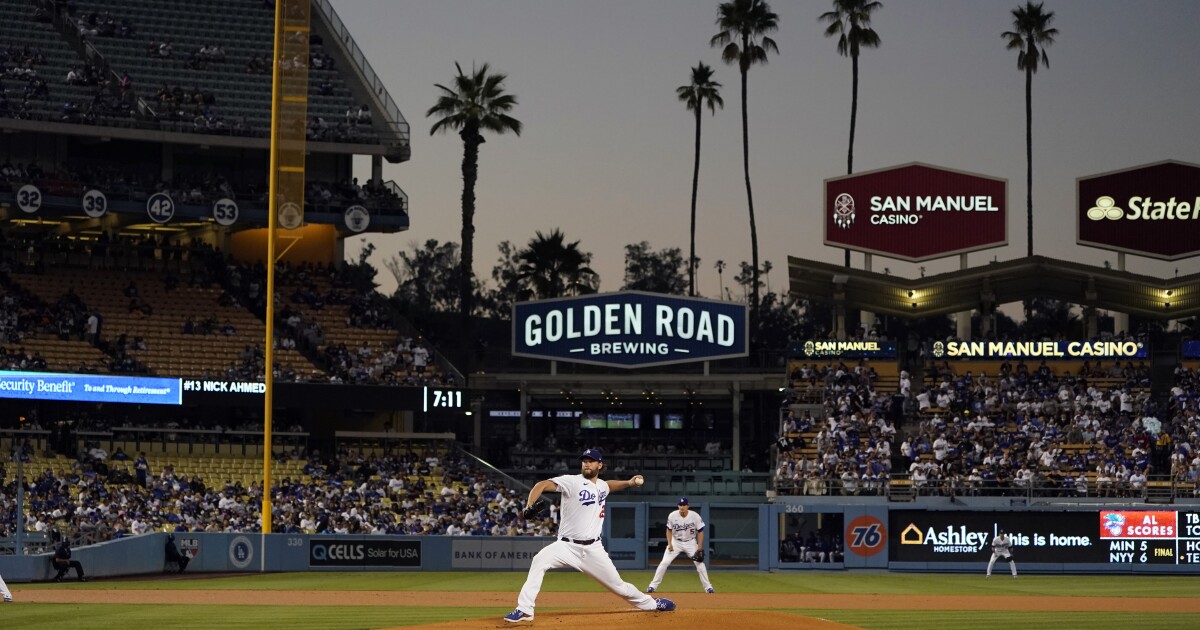 The scene Monday night at Dodger Stadium was familiar: Clayton Kershaw jogging out to the mound to pent-up roars in his return from an extended stint on the injured list. The circumstances, with less than three weeks left in the regular season, were not.

In the past, the Dodgers needed Kershaw to round into top form for the playoffs for a real chance to win the World Series. This year, barring injury, the team has three other Cy Young Award candidates — Max Scherzer, Walker Buehler and Julio Urías — primed for the heavy postseason lifting. The Dodgers don’t need Kershaw to front the charge as he approaches free agency.

But teams can never have enough pitching and Kershaw’s outing Monday was an encouraging step. Pitching for the first time in more than two months, the left-hander gave up one run over 4 1/3 innings in the Dodgers’ 5-1 win over the last-place Arizona Diamondbacks.

Pitching in front of his high school teammate Matthew Stafford of the Rams, Kershaw struck out five (all swinging), walked one and threw 50 pitches. His 89.2-mph average fastball velocity was a tick below his mark this season, but he compiled 11 whiffs anyway. Three of his strikeouts came on a slider. The other two were on curveballs. To top it off, he beat out an infield single in his only plate appearance, bumping up his batting average to .258.

The Dodgers (92-53) kept pace with the San Francisco Giants to remain 2 1/2 games out of first place in the National League West. The Giants drubbed the San Diego Padres 9-1 on Monday to become the first team in the majors to clinch a playoff berth. The Dodgers can seal a spot Tuesday if they beat Arizona and two of the Padres, Cincinnati Reds and St. Louis Cardinals lose.

Kershaw, 33, had last pitched in the majors against the Washington Nationals on July3 when Max Scherzer and Trea Turner, now teammates, were on the other side. He landed on the injured list because of forearm inflammation four days later, expecting to return in a month. But the timetable was extended when he suffered a setback after pitching in a simulated game in late July.

He finally pitched in a competitive game on a rehabilitation assignment with triple-A Oklahoma City last Tuesday, logging three innings. Most importantly, he emerged healthy and was greenlighted to join the Dodgers’ push for their ninth straight division title Monday.

“He’s been miserable,” Dodgers manager Dave Roberts said before Monday’s game. “He hates not competing and not playing, but he’s been a great teammate as far as supporting guys. I know he’s been waiting for this day for quite some time.”

Kershaw found his rhythm from there.

Jake McCarthy singled in the second inning but was left stranded at second base. Kershaw then retired the side in order in a five-pitch third inning. Andrew Young tallied a two-out double in the fourth, but he was left on base too.

Kershaw took the mound in the fifth inning just to face Gallen, the pitcher, and got him to line out. Roberts then surfaced from the dugout to take the ball from him, prompting a standing ovation from the appreciative crowd.

Kershaw is slated to pitch again Sunday in Cincinnati against a Reds club battling for the second wild-card spot and, perhaps, a meeting with the Dodgers in the wild-card game Oct.6. He will be on a longer leash in his ramp up to the postseason. In previous years, Dodgers’ championship hopes would rest on his progression. This time is different.

AJ Pollock said the right hamstring injury he suffered Sept.4 isn’t as severe as he initially feared. The outfielder was diagnosed with a Grade2 strain. He is slated to go on a rehab assignment with a minor league affiliate in the next week before joining the team before the end of the season. Pollock took ground balls and completed agility drills at Dodger Stadium on Monday. …Roberts said the Dodgers will decide whether to place Chris Taylor on the injured list by Wednesday. Taylor hasn’t played since Friday because of a neck injury. He isn’t expected to play Tuesday. … The Dodgers designated outfielder Steven Souza Jr. for assignment to make room on the active and 40-man rosters for Kershaw.

Denial of responsibility! NewsUpdate is an automatic aggregator around the global media. All the content are available free on Internet. We have just arranged it in one platform for educational purpose only. In each content, the hyperlink to the primary source is specified. All trademarks belong to their rightful owners, all materials to their authors. If you are the owner of the content and do not want us to publish your materials on our website, please contact us by email – [email protected]. The content will be deleted within 24 hours.
Loading...
Loading...
best sports newsClaytonDodgersImportantKershawsnews update sportsnewsupdateOctoberfocused