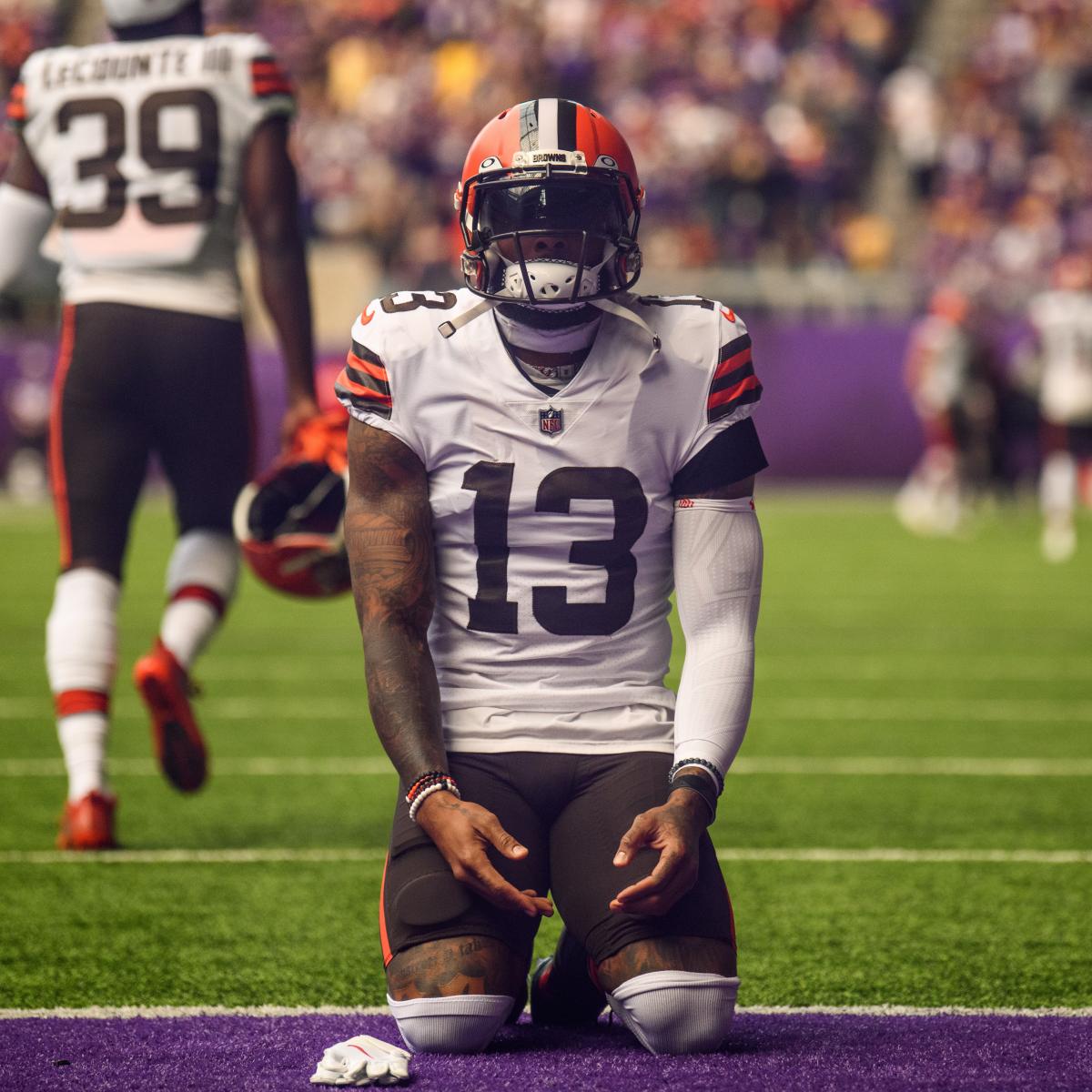 Cleveland Browns Should Trade Odell Beckham Jr. to Fix Their Other Major Flaws

On paper, the Cleveland Browns are one of the most talented teams in the NFL. But the game is played on grass, not paper.

And unfortunately for the team’s most famous wide receiver, it’s being played in 2021, not 2016.

The Odell Beckham Jr. experiment has been a failure in Cleveland. We were reminded of that when the former superstar accounted for only 20 of the team’s 531 total yards in a heart-wrenching 47-42 loss to the Los Angeles Chargers on Sunday.

Beckham isn’t the Browns’ biggest problem. Their defense surrendered 27 first downs and 47 points against the Chargers. They’ve been vulnerable through the air, couldn’t stop L.A. in the red zone, and quarterback Baker Mayfield hasn’t been himself while dealing with a partially torn labrum in his non-throwing shoulder.

The Browns are still a factor in the AFC at 3-2. However, they botched a chance to beat the defending AFC champion Kansas City Chiefs in Week 1. They also underperformed in their home-opener victory over the lowly Houston Texans, scored only 14 points last week against the Minnesota Vikings, and their defense was torn apart Sunday.

They’re likely to fall two games back of the Baltimore Ravens in the AFC North when Baltimore hosts the 1-3 Indianapolis Colts on Monday night, and they have their hands full with the surging Cincinnati Bengals. At the moment, you can’t put them in the same range as Kansas City, Baltimore and the Buffalo Bills in the AFC or the Tampa Bay Buccaneers, Arizona Cardinals or Los Angeles Rams in the NFC.

How do they change that? The coaching staff will undoubtedly work on adjustments, and the return of several key injured players could help. But if Beckham isn’t going to factor in significantly on offense, the front office should consider him trading him in an attempt to improve elsewhere.

This is unacceptable. Odell Beckham Jr. has got to catch this football.

The Browns don’t any trade ammunition on defense, and Mayfield is the guy under center no matter what this season. General manager Andrew Berry won’t have many ways to improve his good-not-great team between now and the NFL trade deadline on Nov. 2, but trading Beckham is becoming more logical.

This is a run-oriented team that also has Rashard Higgins, David Njoku and Austin Hooper in the pass-catching corps and should get five-time Pro Bowl veteran Jarvis Landry back soon from a knee injury. Coming off a two-week stretch in which he caught only four passes on 10 targets for 47 yards, Beckham is expendable. Mayfield hardly ever looks his way, and the two have established practically no chemistry during their two-plus years together despite their insistence otherwise.

We saw that when Cleveland went 6-3 after he suffered a season-ending knee injury last season, and we’re seeing it again now. But regardless of how often Mayfield targets him, it’s obvious that Beckham is no longer the superstar that he used to be.

Beckham has scored only 16 total touchdowns since the start of the 2017 season, and he hasn’t found the end zone in more than a year. He was at his absolute best during his first three seasons with the New York Giants, but myriad injuries have seemingly worn him down at the age of 28.

So, the #Browns just posted 536 yards of offense. They scored 42 points.

As a result, OBJ isn’t worth what he once was on the trade market. The Browns surrendered two strong starters, a first-round pick and a third-round selection in their 2019 trade for Beckham and edge defender Olivier Vernon, but that’s a sunk cost now.

Still, Beckham has been an elite No. 1 receiver, so some other team will likely believe it can get him back to where he was several years ago. It’s a buy-low opportunity for a player with no guaranteed money on his contract beyond this season and is by no means old.

A Beckham trade alone won’t fix the Browns. It won’t turn them into a top-tier contender. But the secondary has been crushed by injuries, and they could use more teeth up front on D as well. If they can flip OBJ for an established asset or more depth on that side of the ball, it’ll make it a lot easier for Kevin Stefanski’s coaching staff to fully right a somewhat wayward ship before his team starts its divisional schedule against the down-but-not-out Pittsburgh Steelers on Halloween.

The Green Bay Packers might immediately come to mind, and for good reason. They’re a contender that lacks talent beyond Davante Adams at that position. The presence of Adams means Beckham wouldn’t be the No. 1 option in the Green Bay offense, and Aaron Rodgers would likely love to see what he could get out of him.

The New Orleans Saints are also trying to remain in the Super Bowl conversation in the first year of the post-Drew Brees era. They’d benefit from adding a player like Beckham to the mix, especially with star wideout Michael Thomas continuing to recover from a significant ankle injury.

The San Francisco 49ers put tight end George Kittle on injured reserve this week and could be getting desperate to salvage their season following a 2-3 start. It also wouldn’t be the first time the 49ers were linked to Beckham.

The Browns are less likely to trade Beckham within their division or even their conference, but the Denver Broncos might also be desperate and are dealing with some key injuries at receiver. The Indianapolis Colts are trying to save their season and could try to give Carson Wentz another weapon as veteran No. 1 wideout T.Y. Hilton deals with a knee injury. And it’s been more than a decade since the New England Patriots possessed a top-notch receiving corps, so that has to be a consideration as well.

The Browns should be pursing a defensive starter, a quality backup and/or a middle-round pick. They shouldn’t be too picky.

Beckham isn’t helping this team. But that could change quickly if the Browns take advantage of his reputation on the trade market.

Denial of responsibility! NewsUpdate is an automatic aggregator around the global media. All the content are available free on Internet. We have just arranged it in one platform for educational purpose only. In each content, the hyperlink to the primary source is specified. All trademarks belong to their rightful owners, all materials to their authors. If you are the owner of the content and do not want us to publish your materials on our website, please contact us by email – [email protected]. The content will be deleted within 24 hours.
Beckhambest sports newsBrownsClevelandfixflawsMajornews update sports

Ethereum – What I Hate, Love, and Fear About the Cryptocurrency

“Let me paint my picture” – CM Punk on his slow start in AEW, how long he plans to stay