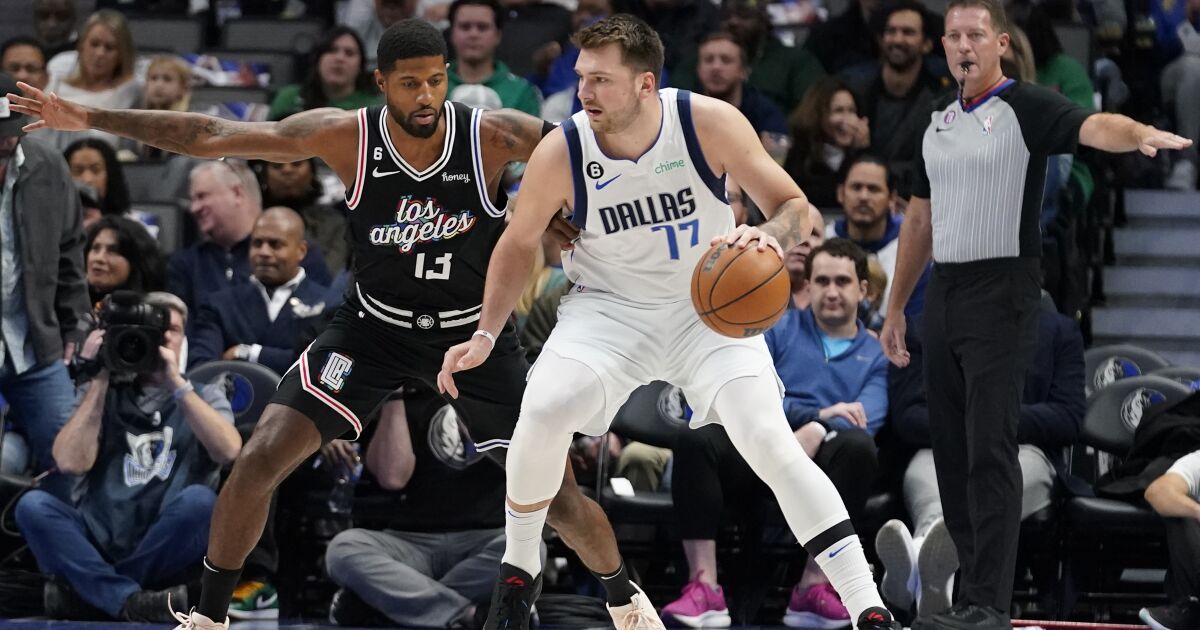 The complete Clippers comeback from 25 points down was so tantalizing close, an intentionally missed free throw close, a fumbled rebound close.

But in the end, close wasn’t good enough for the Clippers, a 103-101 defeat to the Dallas Mavericks leaving Los Angeles in agony because of how close it almost all come together.

“That’s what we’ve been about the last three years,” Clippers coach Ty Lue said about his team “competing” and coming back in games. “We didn’t start the game particularly well offensively or defensively and got behind. And when you get behind by that many points, it’s hard to try to catch up and then you get exhausted.”

Nicolas Batum had been the man of the hour for the Clippers, knocking down three-pointer after three-pointer, going seven-for-seven from three to become the only player in franchise history to be perfect from the three-point line in a single game.

Batum had stepped to the free-throw line for two with 4.2 seconds left and the Clippers down by 103-100.

He made the first free throw but missing the second on purpose.

Lue said wanted to run their “X free-throw” play, which turned out to be Batum missing the free throw to the right side of the rim.

The basketball bounced and ended up in the hands of Robert Covington. But as he tried to get possession of the ball, he lost it out of bounds.

And that was it for the Clippers.

That shot gave Doncic 35 points to go along with his 11 rebounds.

It was essentially the backbreaker for the Clippers, who actually took a three-point lead in the fourth.

“To come back and take the lead against a good team like this just talks about our character and what we’re trying to build here,” Lue said. “So, like I said, they got the victory but we kept competing. So, I like to see that.”

Already without Kawhi Leonard yet again because of right knee injury management, the Clippers then lost starting guard Luke Kennard because of a strained right calf.

Kennard had been called for a foul early in the first quarter and looked to be in discomfort, limping back to the Clippers’ bench with nine minutes sevens seconds left. He eventually untucked his jersey and walked back to the locker room.

They had gotten back reserve point guard John Wall, who had missed the game in Houston on Monday night with left knee injury management, but things still got worse for the Clippers after Kennard was injured.

Wall was strong all game, finishing with 17 points.

Paul George got off just four shots in the first half, making two, but not nearly enough for a Clippers team in need of offense with Leonard and Kennard out of the game.

But George faced double teams all game, the Mavericks limiting him to 13 shots, of which he made seven for is 23 points to go along with seven rebounds and six assists.

The Clippers fell into a 15-point hole in the first quarter that grew into a 54-29 deficit in the second quarter, forcing them to try and play catch-up the rest of the way.

They shot just 34.4% from the field in the first half. They turned the ball over 12 times.

They outscored the Mavericks 33-15 in the third quarter and that got them back in the game.

“I would love to win it tonight,” Batum said. “But you can’t put yourself in that position. I know it’s against a good team with a great player. It came be tough on the road to try to produce a win. We almost did it. Almost pulled it out. But we gotta get a better start. You need to be a better job than it and don’t be down 25 on the road.”

Denial of responsibility! NewsUpdate is an automatic aggregator around the global media. All the content are available free on Internet. We have just arranged it in one platform for educational purpose only. In each content, the hyperlink to the primary source is specified. All trademarks belong to their rightful owners, all materials to their authors. If you are the owner of the content and do not want us to publish your materials on our website, please contact us by email – [email protected]. The content will be deleted within 24 hours.
best sports newsClipperscomebackFallsLossMavericksnews update sportsnewsupdate

Carvalho already given hope of England call-up after quitting Portugal