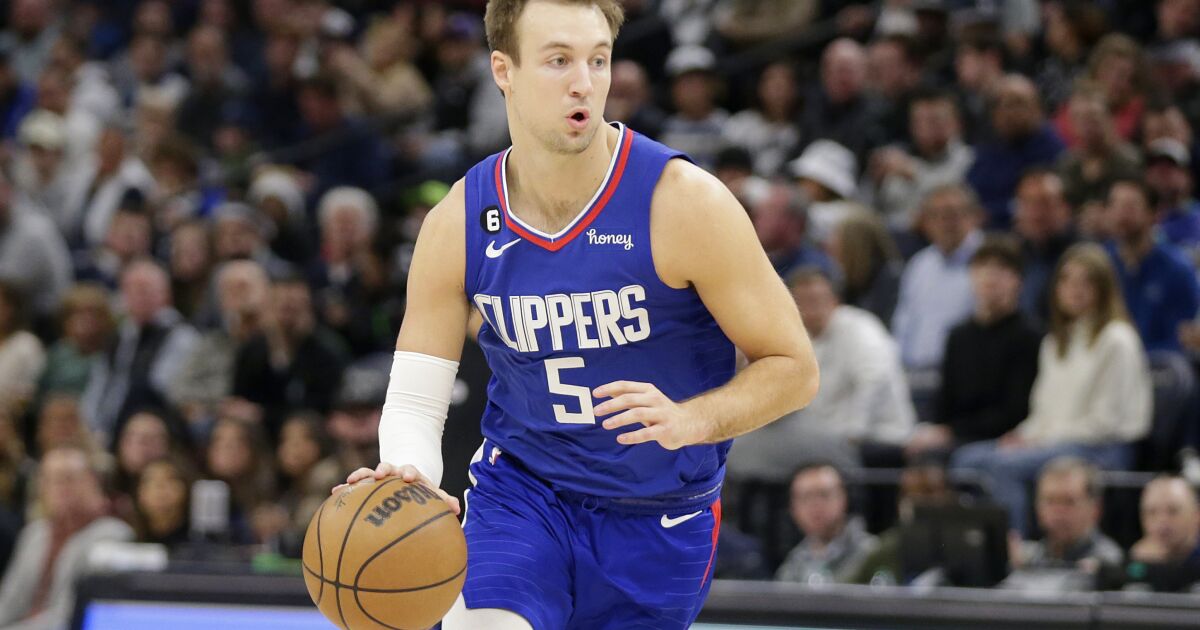 Clippers guard Luke Kennard could return as soon as Thursday

Luke Kennard approached his locker inside Crypto.com Arena on Thursday evening and, with the exasperated smile of a man tired of waiting, grabbed the black jersey dangling on a hanger and shook it from its sides.

It has been a while since the reserve guard donned his Clippers jersey. Eighteen days, and nine games, to be exact, since a calf injury he’d first irritated Nov. 15 flared up again after a Jan. 6 game against Minnesota, sidelining him ever since.

The wait soon could be over. Kennard and the team are leaving open the possibility that the reserve shooting 46% on three-pointers this season could return as soon as Thursday if his recovery continues its encouraging progress.

“I’ve been doing on-court stuff and playing live so it’s just making sure that it’s gone 100%,” Kennard told The Times. “I left the last road trip to come back and speed it up a little bit more. I’m ready. It’s frustrating, it’s annoying, so it’s time to come back.”

Kennard’s return brings a significance that extends beyond having one of the NBA’s most consistent shooters at coach Tyronn Lue’s disposal again. It would also allow the coach to begin implementing changes to his rotation that he hinted at in recent weeks — shifts in playing time for the team’s corps of guards that Lue said hinged on Kennard being back.

Kennard traveled with the team on its most recent three-game trip with the belief there was a possibility he could return but left the trip two games in after he was “still feeling it a little bit,” he said, and because he wanted to get on the court more consistently. He dressed for the team’s shootaround Tuesday morning before a game against the Lakers and he said he has played in live games of three-on-three.

The team next plays San Antonio on Thursday and hasn’t ruled out Kennard yet, with any return likely hinging on Kennard being able to practice to gauge how he responds to a full-scale workout. The team still considers Kennard day to day, and the guard said it will be the team’s call to clear him. But he feels ready, he added.

“Just getting comfortable and getting those game-speed reps back,” Kennard said. “I’m getting more comfortable with it. It’s going really good, though. Faster than we thought.”

If Kennard does return as soon as he hopes, the Clippers — who have battled injuries all season, able to play with its roster fully available only four times — still won’t be entirely whole. Reserve guard John Wall missed his sixth consecutive game Tuesday with an abdominal injury, though he did take part in shooting drills during a portion of shootaround open to media.

Denial of responsibility! NewsUpdate is an automatic aggregator around the global media. All the content are available free on Internet. We have just arranged it in one platform for educational purpose only. In each content, the hyperlink to the primary source is specified. All trademarks belong to their rightful owners, all materials to their authors. If you are the owner of the content and do not want us to publish your materials on our website, please contact us by email – [email protected]. The content will be deleted within 24 hours.
best sports newsClippersguardKennardLukenews update sportsnewsupdatereturn

Djokovic is no ‘villain’ – took me 10 years to get over cheat storm: Azarenka | Tennis News – Times of India