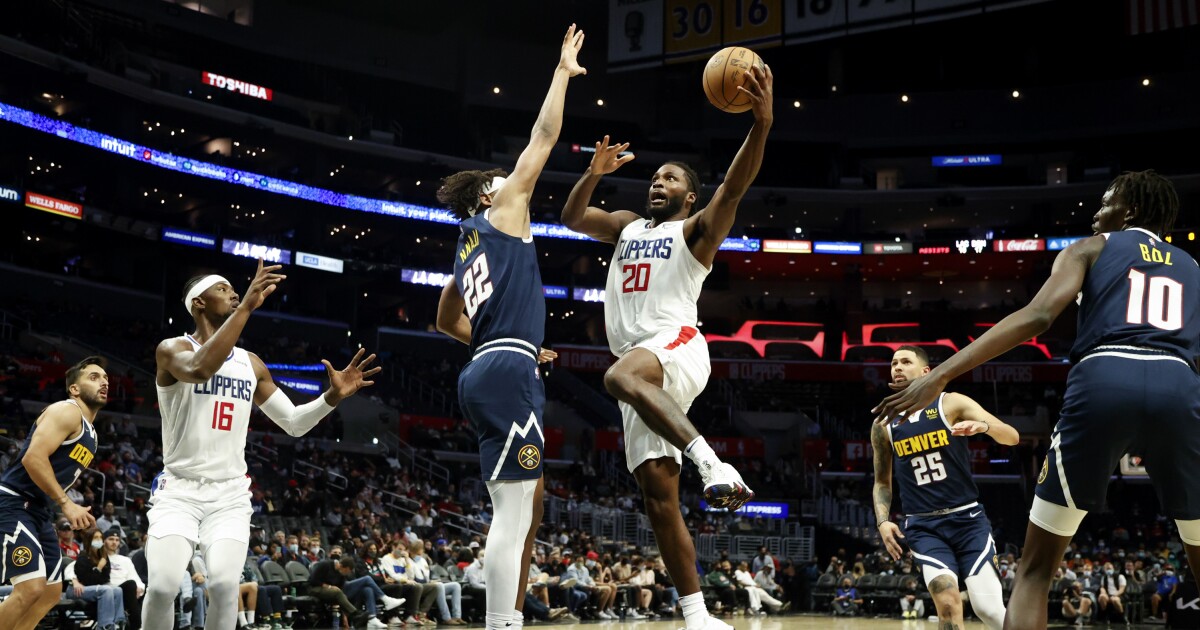 Before Facebook, WhatsApp and Instagram were knocked offline Monday, Justise Winslow posted a photo of an idyllic scene, time-stamped at 7 a.m., to Instagram: A verdant, hilly backdrop with a whiteboard in the foreground. On it, hand-written in blue, dry-erase marker, was a quote about perspective, suggesting that today’s struggles would eventually become “the ‘good old days’ we laugh about tomorrow.”

Winslow has posted morning motivational messages for weeks, all scribbled to the same whiteboard. Yet coming hours before the Clippers’ first preseason game against Denver at Staples Center, a 103-102 win, Monday’s themes felt especially apt for a player attempting this season to make his own recent struggles to stay healthy a distant memory.

As a national champion at Duke, the 10th overall pick in 2015, and a rookie who played 78 games and even started two playoff games for Miami, Winslow was seemingly a player made for an era when evaluating players on rigid, position-specific roles had become anachronistic.

Miami used his 6-foot-6, 220-pound frame to play a center in playoff games, then as a slashing off-ball wing, then as a point guard, all while capable of checking all five opponents on defense.

There’s nothing more that he’d like to do, then, then prove he has left in the past the setbacks that impeded that development, a litany of injuries that have seen him play more than 26 games only twice in the last five seasons. When Winslow posts about overcoming challenges on Instagram, he might as well be describing his most serious to date: the hip he displaced during the NBA’s 2020 restart with Memphis, a “freak kind of thing,” as he once called it, that occurred when he was bumped off-balance while dribbling and planted his leg awkwardly.

Hip-replacement surgery followed. He didn’t play an NBA game for more than a year, until Feb. 20 of last season.

“It was an interesting year with COVID, with my injury, trying to balance all that, the Black Lives Matter movement. It was just a lot going on, on and off the court,” Winslow said during training camp last week. “… With the offseason, being able to feel pretty good and feel healthy for two, three months now, I feel that my game is coming back and I’m feeling good about that.

“But definitely a tough injury. I don’t wish that on anybody.”

Whether Winslow can heed his Monday message and play so well his injuries are a thing of the past and his potential is realized remains one of the core questions hovering over this young Clippers season, which continued Monday while Paul George, Marcus Morris and Nicolas Batum all rested as healthy scratches, as did Denver’s Nikola Jokic. Terance Mann scored 14 points to lead Los Angeles, and George King scored 12 and Brandon Boston Jr. added 10, while making the game-saving defensive stand on the final possession by limiting Denver’s Markus Howard to a long shot over Boston’s long reach.

“You look at Justise in terms of where his curve was going,” said Lawrence Frank, the Clippers’ president of basketball operations, “prior to the hip injury.”

The resting veterans, along with the injured Kawhi Leonard and recovering Serge Ibaka, watched courtside as Winslow, playing with a unit of reserves, pushed the ball upcourt and spotted an open Jay Scrubb along the baseline for a dunk in the second quarter. Later, he grabbed a rebound and pushed upcourt, a play as-advertised by coach Tyronn Lue last week when describing Winslow as a backup point guard also likely to moonlight as a small-ball center. He played both against the Nuggets.

In informal games before training camp began, and during the first official practices, Lue said Winslow added a different element by grabbing rebounds and attacking upcourt with his dribble, along with his defensive versatility.

“He showed us a lot in this last week and a half, two weeks,” Lue said.

Hints of Winslow’s old promise returned last season in Memphis, where the medical staff and young teammates kept his spirits high, he said.

“I needed that transition, going from Miami to a team like that, I feel like it helped me get to where I am today,” he said.

In only his third game back in February, he defended Leonard ruggedly and kept his drive away from the basket. He drew an offensive foul from George, as well.

The Clippers’ calling card during their conference-final run became their ability to pick apart opponents using small-ball lineups. Caveats abound. But if Winslow is healthy, his skill set could allow Lue a picture-perfect option to continue doing so.

“I feel like those are the best players in the league, guys that you just can stick anywhere and you know, he’s the guy that necessarily doesn’t show up in stat sheets, but affected the game in so many ways just with his IQ plays,” said George, who worked out with Winslow during the offseason. “He’s had a lot [in training camp] from seeing passes, throwing some good passes, spacing the floor, running the floor, he’s had a lot of moments like that.”

Denial of responsibility! NewsUpdate is an automatic aggregator around the global media. All the content are available free on Internet. We have just arranged it in one platform for educational purpose only. In each content, the hyperlink to the primary source is specified. All trademarks belong to their rightful owners, all materials to their authors. If you are the owner of the content and do not want us to publish your materials on our website, please contact us by email – [email protected]. The content will be deleted within 24 hours.
best sports newsClippersfindingHealthyJustiseMotivationnews update sportsnewsupdate

What happens to your life stories if you delete your…

Tennessee vs. Ole Miss Delayed After Fans Throw Objects onto…