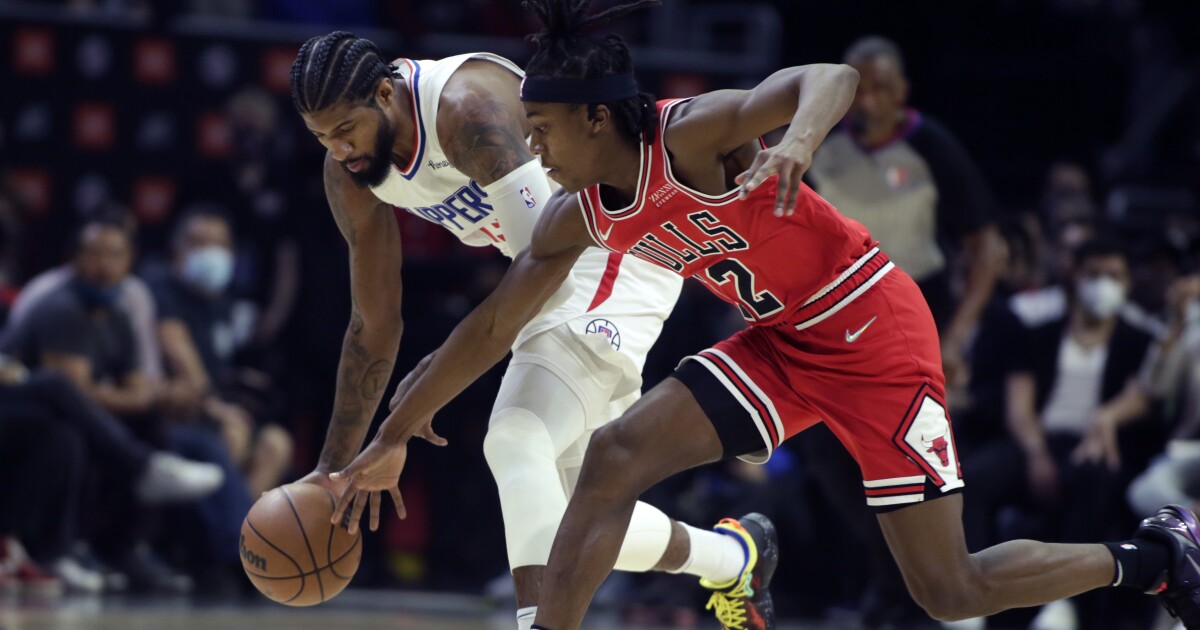 It was a bad sign when, early in Sunday’s second quarter, the Clippers had committed more turnovers than made baskets, had failed to make a shot outside of the paint and, in the process, proved yet again that they are the NBA’s best at falling behind by double-digit deficits.

It was an equally bad sign for Chicago throughout the second half that despite all that had gone wrong for their opponent, the Clippers were nonetheless doing the other thing they are best at — hanging around, chipping away and refusing to wave the white flag.

So when Paul George drove through his defender’s shoulders with 10 minutes left in the fourth quarter, cocked his body backward and made a ridiculously difficult jump shot for the Clippers’ first lead in 34 minutes, what erupted inside Staples Center wasn’t the sound of thrilled surprise. It was the kind of noise akin to a concert crowd reveling at hearing the familiar first chords of the headliner’s signature hit.

They were doing it again, following the formula that had delivered a seven-game winning streak despite once trailing by at least 13 in four of them.

Even when the Clippers trailed again by eight with eight minutes to play, or nine with 4 minutes 45 seconds left after Lonzo Ball turned an intercepted Paul George pass into a layup on the other end, and Terance Mann limped off, the result felt anything but final.

Not until George missed his seventh three-point attempt with just more than a minute to play, and Bulls guard Zach LaVine answered with a step-back two on the other end, did this rally finally run dry in a 100-90 loss, the Clippers’ first since Oct. 29.

George scored 27 points, making all 11 of his free throws, with 11 rebounds, but he made seven of his 25 shots in 41 minutes, a total coach Tyronn Lue repeatedly said he regretted, saying he had played his starters too many minutes on the second night of a back-to-back, one night after a dominant victory against Minnesota.

They didn’t score inside the three-point arc during the last 10 minutes as they settled for jump shots.

“Our guys were tired, you could see that, and that was on me,” Lue said. “Whatever. Start a new win streak.”

Eric Bledsoe continued his best week of the season with 21 points and said he had felt more comfortable within the Clippers’ offense.

DeMar DeRozan dropped 35 points — including 21 in the first half despite scoring only two points in the paint — for Chicago in his Los Angeles homecoming this season, in the city he has said he hoped to play in while considering his free-agency options.

“I thought he was too comfortable in the first half,” Lue said. “I thought he got to his spot every single time.”

DeRozan has found a good fit in Chicago, it turns out. The Bulls are 9-4, with the Eastern Conference’s third-best winning percentage and even without center and former USC standout Nikola Vucevic, who missed his second consecutive game after testing positive for COVID-19, they outrebounded and outscored the Clippers in the paint.

Nothing in the rules requires the Clippers to find their rhythm only after falling behind, a pattern that has left Lue at once both pleased with his team’s resilience and frustration in its failure to launch. They committed 10 turnovers in just the first quarter.

“It’s just kind of tough to keep climbing yourselves out of holes like that,” Lue said before tipoff.

It’s even tougher on the second night of a back-to-back, even when the Clippers’ 27-point win Saturday against Minnesota — a blowout sparked by Lue’s challenge to control the game from tipoff — afforded its starters plenty of rest. They finished with more turnovers (20) than assists (16) Sunday and made only 35% of their shots, including 32% of their three-pointers.

Denial of responsibility! NewsUpdate is an automatic aggregator around the global media. All the content are available free on Internet. We have just arranged it in one platform for educational purpose only. In each content, the hyperlink to the primary source is specified. All trademarks belong to their rightful owners, all materials to their authors. If you are the owner of the content and do not want us to publish your materials on our website, please contact us by email – [email protected]. The content will be deleted within 24 hours.
best sports newsBullsClippersEndsLossnews update sportsnewsupdatesevengame

Fantasy QB Rankings Week 11: Who to start, sit at quarterback in fantasy football