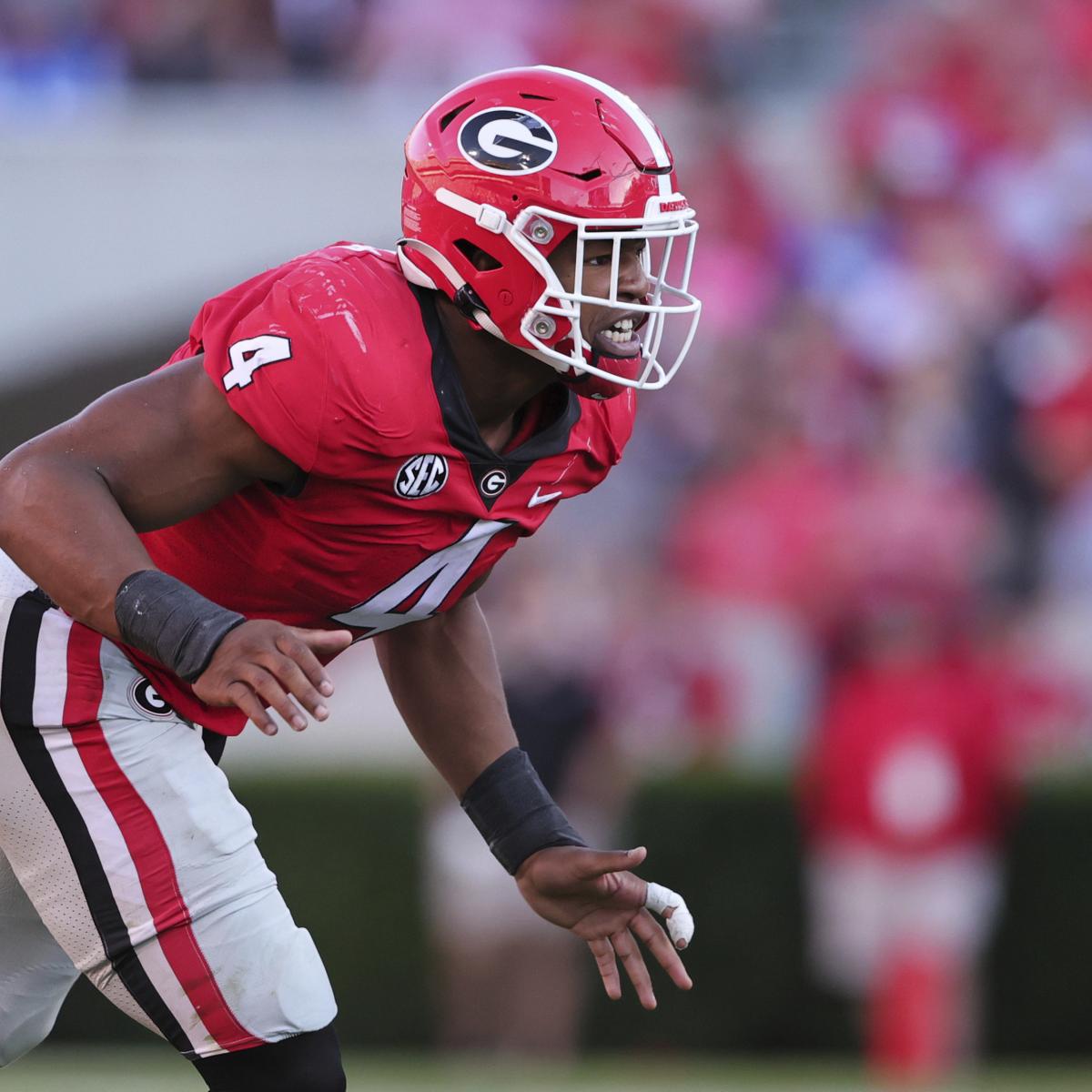 Most of the discussion regarding Tuesday’s College Football Playoff rankings release surrounded which teams could create paths to the top four from further down the top 10.

The top seven teams did not change from last week. The Georgia Bulldogs remain at No. 1 with the Alabama Crimson Tide sitting at No. 2. Oregon, Ohio State, Cincinnati, Michigan and Michigan State follow in that order.

Here are the full #CFBPlayoff selection committee rankings for games played through November 13.

Where does your team rank?

The strange decision to place Michigan ahead of Michigan State from last week stayed in place. The Spartans beat the Wolverines in their head-to-head matchup.

As The Athletic’s Chris Vannini noted, the swap from last week is strange, but the rankings will play themselves out:

Once again, I have no qualms about the CFP rankings except for the stupid UM/MSU thing that doesn’t really matter.

The Spartans and Wolverines still have to play Ohio State in the next two weeks. One of those three teams will win the Big Ten East.

Michigan State in the No. 7 spot has a path to the playoff if it beats Ohio State and wins the Big Ten Championship Game.

Stadium’s Brett McMurphy noted that the lowest a playoff team has been ranked at this point of the season is No. 7:

Despite what you heard, lowest ranked teams to make @CFBPlayoff at this point of season was not Michigan State. It was No. 7 Oklahoma in 2019 &amp; No. 7 Georgia in 2017

That statistic does not bode well for the Notre Dame Fighting Irish, Oklahoma State Cowboys or Wake Forest Demon Deacons, who finish out the top 10.

Notre Dame’s position at No. 8 is significant for Cincinnati because that is the Bearcats’ best victory.

Notre Dame up one spot in the College Football Playoff poll to No. 8 this week.

Irish have one Top 25 win, over No. 15 Wisconsin. There’s a path for Notre Dame into the top four, getting less complex by the week but it’s not uncomplicated.

The Irish could have their path open up if two of the Big Ten teams in front of them stumble in the coming weeks.

Oklahoma State is the highest-rated Big 12 program in the new Top 25. The Cowboys jumped up a spot thanks to the loss suffered by the Oklahoma Sooners against the Baylor Bears on Saturday. Sports Illustrated’s Ross Dellenger outlined the shift in positioning between the three Big 12 schools:

CFP rankings update: Oklahoma drops from 8 to 13 after the loss to Baylor. Baylor is 11th.

The Cowboys could be a threat to the other power-five conference champions if they beat a pair of ranked foes, starting with a win over Oklahoma in Bedlam on November 27.

Oklahoma drops five spots to No. 13 after loss to Baylor.

If the Ducks win out, they should feel secure in their top-four spot alongside the SEC and Big Ten champions, as well as undefeated Cincinnati.

Cincinnati’s resume received a bit of a boost on Tuesday, as the Houston Cougars were placed into the No. 24 spot. Houston is in line to play the Bearcats in the American Athletic Conference title game.

Oregon’s resume also could get better if it beats the Utah Utes, who sit at No. 23. Sirius XM’s Geoff Schwartz pointed out the discrepancies between the rankings of the Pac-12 teams and the current line for their Saturday matchup. Utah is a three-point favorite at DraftKings Sportsbook.

The gambling market has Utah much higher than 23rd https://t.co/oMT9QyIrme

The bottom half of the Top 25 is also populated by a pair of SEC West teams. The Arkansas Razorbacks, who play Alabama on Saturday, and the Mississippi State Bulldogs, who lost to Bama, are in there to support the current resume of the No. 2 team.

Denial of responsibility! NewsUpdate is an automatic aggregator around the global media. All the content are available free on Internet. We have just arranged it in one platform for educational purpose only. In each content, the hyperlink to the primary source is specified. All trademarks belong to their rightful owners, all materials to their authors. If you are the owner of the content and do not want us to publish your materials on our website, please contact us by email – [email protected]. The content will be deleted within 24 hours.
best sports newsCollegeFootballnews update sportsnewsupdateplayoffPollrankings