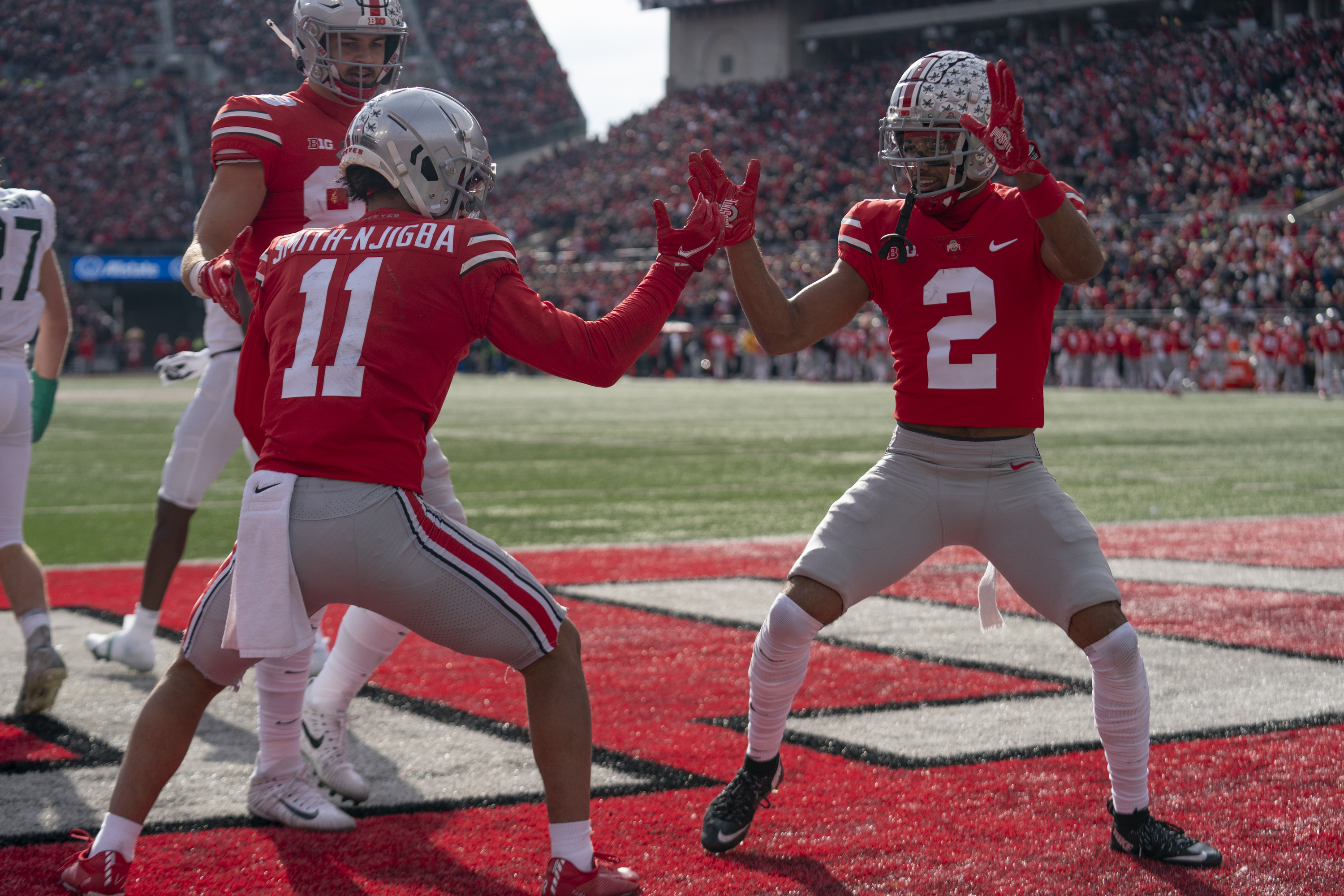 The race for the four College Football Playoff spots took a turn Saturday when the Ducks (and the Pac-12 as a whole) were virtually eliminated with a blowout loss at Utah. They weren’t the only contender who saw their playoff hopes come to a screeching halt thanks to a blowout loss, as the Spartans were steamrolled in a 56-7 defeat at Ohio State.

That made the path for the Bearcats to become the first Group of Five team to reach the CFP in the event’s history that much clearer, especially since either Ohio State or Michigan will have a second loss after the rivals square off Saturday.

There is plenty to be decided over the course of the next two weeks, and the selection committee set the table with Tuesday’s new batch of rankings:

While there are still a number of scenarios that could unfold in the next two weeks, the list of true contenders is fairly clear at this point.

Georgia, Ohio State, Alabama, Michigan, Cincinnati, Notre Dame, Oklahoma State and Oklahoma are essentially battling for the four spots. Any other team would need complete chaos to grab a spot, and even that may not be enough with only so much football remaining.

It gets a bit trickier from there, as the outcome of the clash between Georgia and Alabama could determine if there are only one or two spots remaining.

If the Crimson Tide defeat the Bulldogs, both SEC schools will likely be in the playoff alongside the Big Ten champion (assuming it is one-loss Ohio State or one-loss Michigan). That would leave just one more spot for the other contenders, although a Georgia win could open up another slot with a two-loss Alabama on the outside.

Notre Dame likely needs the most help since it lost a head-to-head game with Cincinnati and will not have a conference title game to add to its resume. Oklahoma and Oklahoma State play each other Saturday, and the winner will also need to take home the Big 12 title to remain in the picture.

Then there’s the Bearcats.

They may have been fighting an uphill battle for respect at times this season when compared to the Power Five conference teams, but they could be two wins away from history.

Cincinnati’s victory over Notre Dame looks better with each passing week, and the looming American Athletic title game matchup with Houston presents it with another opportunity to add a marquee win to its resume.

That could be enough to make the CFP, especially now that Oregon is no longer in the picture and many of the other contenders will pick up a loss since they play each other.

Denial of responsibility! NewsUpdate is an automatic aggregator around the global media. All the content are available free on Internet. We have just arranged it in one platform for educational purpose only. In each content, the hyperlink to the primary source is specified. All trademarks belong to their rightful owners, all materials to their authors. If you are the owner of the content and do not want us to publish your materials on our website, please contact us by email – [email protected]. The content will be deleted within 24 hours.
Announcedbest sports newsCollegeCommitteeFootballnews update sportsnewsupdateplayoff

Elizabeth Holmes Speaks for Herself