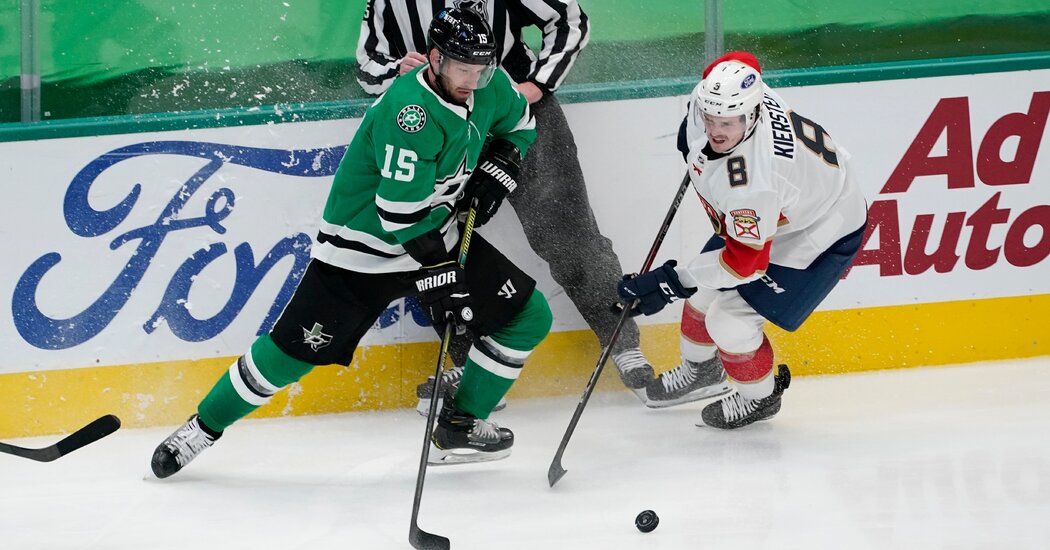 College Players Graduating to the N.H.L. Have a Chance for Longer Test Run

Each spring as college hockey seasons conclude, several top players — highly drafted underclassmen and free agents, for the most part — quickly progress to the professional ranks. But there’s a bonus for those players this year.

Because the N.H.L. season didn’t start until January, and it has been extended to May 19 to accommodate games postponed and rescheduled because of the coronavirus pandemic, college signees will arrive with more games left in the N.H.L. regular season than usual, giving them six additional weeks to acclimate themselves to the pro game. With more games to evaluate players, burning the first year of an entry-level contract becomes less fraught for teams.

Some players are initially assigned to American Hockey League affiliates, depending on whether their N.H.L. team is in rebuilding mode with plentiful ice time available for players with promise or chasing a playoff spot.

Another complicating factor this year was that the N.H.L. trade deadline, normally in late February, was pushed back to April 12. Trade acquisitions have affected ice time — positively and negatively — for recent collegians.

Philadelphia General Manager Chuck Fletcher signed Michigan sophomore defenseman Cam York, the No. 14 overall pick in the 2019 draft, on March 31, five days after the Wolverines had to withdraw from the N.C.A.A. tournament because of positive coronavirus tests. With the Flyers trying to remain in playoff contention, they sent York to their A.H.L., where they can evaluate him before a possible promotion. Lehigh Valley had about 20 games remaining when York signed.

“Normally, when these kids sign out of college, they might get a handful of regular-season games prior to the summer break,” Fletcher said.

“It’s an opportunity for him to really get some games, get some experience,” Fletcher added.

The most recent college signees to make their N.H.L. debuts were Ottawa’s Shane Pinto and Jacob Bernard-Docker, who signed entry-level contracts shortly after North Dakota lost the N.C.A.A. Midwest Regional final on March 27. After completing their required seven-day quarantine periods, their first practice with their new teammates was on Tuesday. Bernard-Docker made his debut on Wednesday, and Pinto, the No. 32 overall pick in 2019, played his first game in Montreal on Saturday and had an assist.

“It’ll be good for me to get some experience,” Pinto said, “and then I’ll have a whole summer to figure out what to get better at.”

Montrealers will have to wait for the rookie who they most wanted to see on Saturday to take the ice: Cole Caufield, who capped his two years at Wisconsin by winning the 2021 Hobey Baker Award, given to the best player in men’s college hockey.

Caufield, 20, who led Division I in goals (32) and points (52), signed the day after his Badgers were eliminated in the N.C.A.A. tournament. Although the Canadiens were in need of scoring help — they held the final playoff spot in the North Division entering Sunday — they assigned him to their A.H.L. affiliate, the Laval Rocket. In his first two games, he scored three goals, two of them game-winners, earning the moniker Goal Caufield.

Montreal called up Caufield on Friday, but he was placed on the taxi squad. Caufield can practice, but his only way into the lineup will require either the Canadiens clearing cap space or an injury to another player.

A return to Laval wouldn’t be the worst thing for Caufield. In the estimation of Bill Guerin, the Minnesota general manager, there are several benefits to starting a pro career in the minors, which he did for parts of two seasons for Utica in the A.H.L., before playing 18 years in the N.H.L.

“The teammates that I had helped me develop, learn how to be a good teammate and how to act like a professional and carry yourself,” Guerin said.

Guerin himself signed a player out of college last month — the 20-year-old Boston College sophomore Matt Boldy — and sent him to their A.H.L. team in Iowa.

“As soon as Matt’s ready and proves himself at Iowa, we’ll take the next step,” Guerin said. “He’s a very important piece of our puzzle. We’re going to do the things that are right for his development so that when he gets here he can help us win.”

Unlike Boldy, the former North Dakota defenseman Matt Kiersted immediately jumped to the N.H.L. and quickly saw the difference. Kiersted made his pro debut on April 3, two days after signing with Florida, joining a team in a three-way battle with Tampa Bay and Carolina for first place in the Central Division.

“The faster play is what stood out for me,” Kiersted said after the Panthers’ home victory over Columbus on April 3. “Things happen quicker, guys are better at making plays, and it’s a little tougher to defend.”

Following the Frozen Four, defenseman Zac Jones of the national champion UMass was among those who signed pro contracts. Jones joined the Rangers for their morning skate last Thursday, but Coach David Quinn has yet to play him in a game.

In his sophomore season at Massachusetts, Jones finished third in the nation in scoring among defensemen with nine goals and 24 points in 29 games. Still, college credentials don’t guarantee automatic entry into an N.H.L. lineup.

Even with the calculation changed for teams, a simple factor remains important, especially for the Rangers as they entered Sunday six points out of a playoff spot.

“They’ve got to earn it and give you reason to put them in,” Quinn said. “We certainly won’t hesitate putting him in there if we think we can help us win.”

Denial of responsibility! NewsUpdate is an automatic aggregator around the global media. All the content are available free on Internet. We have just arranged it in one platform for educational purpose only. In each content, the hyperlink to the primary source is specified. All trademarks belong to their rightful owners, all materials to their authors. If you are the owner of the content and do not want us to publish your materials on our website, please contact us by email – [email protected]. The content will be deleted within 24 hours.
best sports newschanceCollegeGraduatingLongernews update sportsnewsupdateNHL