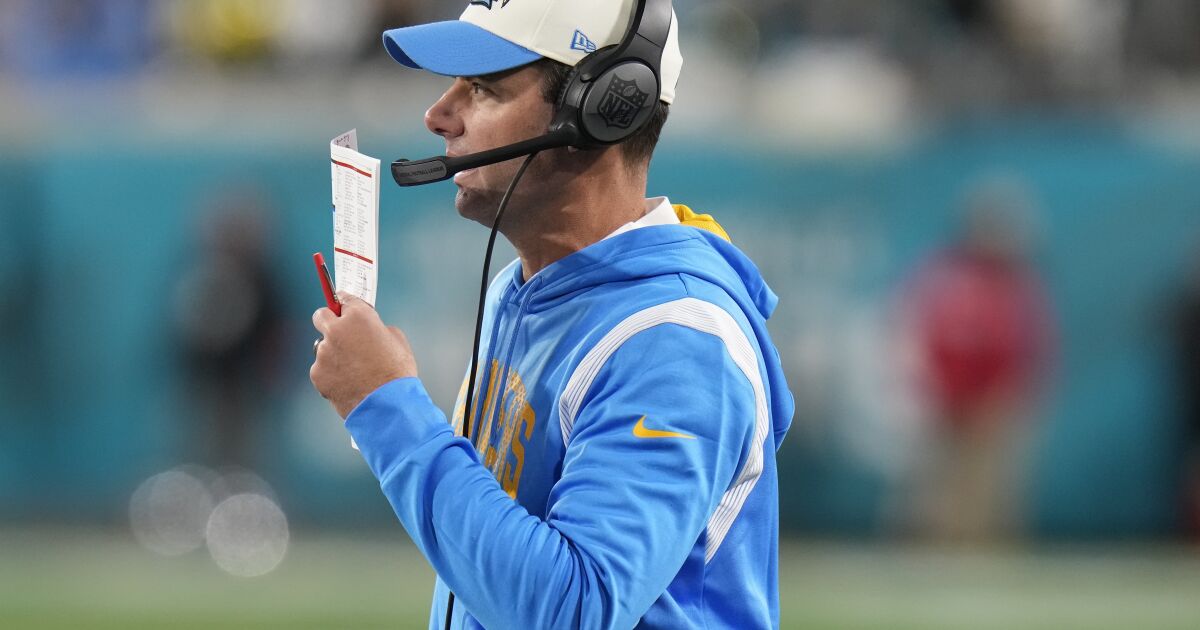 Column: Is Brandon Staley the right coach to lead Justin Herbert and the Chargers?

As the Chargers’ 27-point advantage gradually vanished, the look on Brandon Staley’s face told the story of the game.

He looked how Sean McVay did when Bill Belichick embarrassed him in the Super Bowl.

Doug Peterson has won a championship, Staley hasn’t, and that difference was exhibited over a soul-crushing second half for the Chargers in their 31-30 defeat to the Jacksonville Jaguars on Saturday night.

That’s the ground Staley has to make up if the Chargers are to have any chance of reaching a Super Bowl. That’s the distance he has to cover to justify the team retaining him.

Staley is smart. He’s a good communicator. He’s fearless. He’s still 40. He was in his second year as a head coach this season. Before the Chargers hired him, he was a coordinator for only one season.

The problem: The Chargers don’t have any.

Next season will be Justin Herbert’s final year on a rookie contract.

Whether it’s Dean or John Spanos, or general manager Tom Telesco, whoever decides whether Staley will remain their coach will have to determine if he can lead them to a Super Bowl next season.

Staley is one of the game’s brightest defensive minds, but is he that coach?

He wasn’t on Saturday night. He wasn’t even close.

With the Jaguars erasing a 27-point lead, the Chargers were the victims of the third-largest comeback in postseason history. Here’s what was especially stunning: The Chargers blew their edge without committing a single turnover.

This wasn’t a case of a quarterback throwing an errant pass or a running back failing to hold on to the football. This was a case of a young coach being outclassed by a more seasoned opponent, the result a tidal wave the Chargers had no chance of turning back.

Peterson adjusted, Staley couldn’t adjust back, and that was the game.

Staley came out with a defensive game plan that contributed to the Chargers intercepting four of Trevor Lawrence’s passes in the first half. However, when Peterson increased the tempo of his offense, the Chargers had no answers for the Jaguars’ no-huddle plays. The shift in momentum was magnified by some backbreaking penalties. Suddenly, the Chargers couldn’t get a stop.

Offensively, the Chargers continued to be failed by their suspect ground game, the inability to run the ball preventing them from controlling the clock. The Jaguars increased their pressure on Herbert and kept Keenan Allen under wraps, a task made easier because of the absence of Mike Williams, who was injured in Week 18 when Staley played his starters in a meaningless game against the Denver Broncos.

This experience should make Staley a better coach.

He has already demonstrated a willingness to change, his tempered aggression on fourth down a notable example. The guess here is that he won’t play his starters into the fourth quarter in a regular-season finale the next time he already has a playoff seed locked in.

The Chargers have paid for his mistakes in each of the last two seasons. They should at least consider whether they could benefit from what he’s learned from those errors.

And if retaining Staley carries an element of risk, so does replacing him, as a new coach next season would be Herbert’s third in a four years.

The franchise’s decision makers could very well determine that what Staley needs is veteran help, like what Wade Phillips provided McVay in his first three seasons with the Rams. Perhaps the Chargers replace Joe Lombardi with a more experienced offensive coordinator.

Then again, what happened in Jacksonville can’t be overlooked. Staley was dominated in a way that had to shake his players’ confidence in him. The Chargers’ Curse that Staley strove to eradicate resurfaced stronger than ever, his new-age approach producing the same old results. Ultimately, taking on the history of a franchise might have been too great a task for a coach who didn’t have much a history of his own.

Now, the organization has to decide whether to place another wager on Staley. The time element increases the difficulty of the evaluation. Figuring out whether Staley can become a championship coach is only part of the equation. Calculating how quickly he can make that transformation is the other.

Denial of responsibility! NewsUpdate is an automatic aggregator around the global media. All the content are available free on Internet. We have just arranged it in one platform for educational purpose only. In each content, the hyperlink to the primary source is specified. All trademarks belong to their rightful owners, all materials to their authors. If you are the owner of the content and do not want us to publish your materials on our website, please contact us by email – [email protected]. The content will be deleted within 24 hours.
best sports newsBrandonchargersCoachColumnHerbertJustinLead