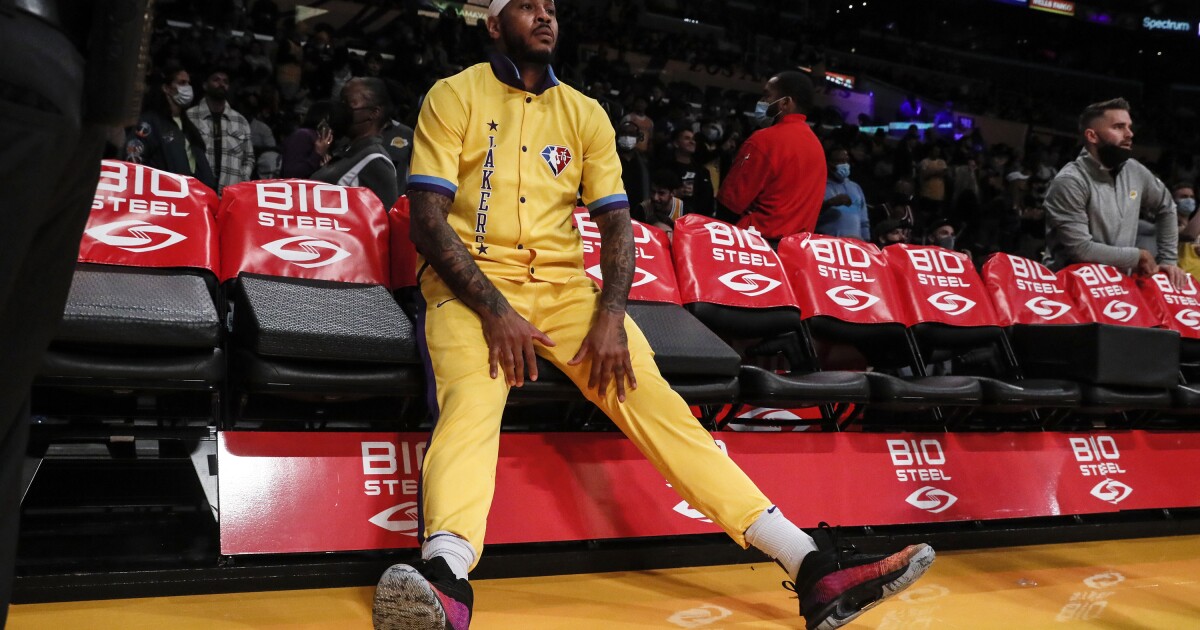 Column: Lakers take their show on the road. Can they get their act together?

Russell Westbrook stared at the box score from the Lakers’ 121-103 loss to the Chicago Bulls on Monday as if he might find a hidden explanation among the minus signs and poor three-point shooting percentage printed on the sheet of paper in front of him. Either that, or he hoped the intensity of his gaze would burn holes in it and destroy the evidence of another disappointing performance by the Lakers at Staples Center.

They opened the season with 12 of their first 15 games at home, a soft schedule that should have allowed them to build confidence while they built a winning record. They played the three road games on two trips — a back-to-back sequence at San Antonio and Oklahoma City, and a visit to Portland — so they were spared having to travel to the Eastern time zone.

Their depth should have kept them going even after LeBron James strained an abdominal muscle on Nov. 2 and exited the lineup. That’s why they loaded up on veterans last summer.

Not much has worked out the way the Lakers planned.

James remains day to day after missing his seventh straight game, their depth hasn’t saved them, their defense hasn’t been as reliable or consistent as it was last season, and they stumbled through the cushiest part of their schedule with a 7-5 record at home and 8-7 overall. Soon, things will get tougher. On Wednesday they’ll face the defending NBA champion Bucks at Milwaukee to launch a five-game trip that will take them out of the Pacific time zone and out of their comfort zone.

“We welcome the road trip. It will be good for us,” coach Frank Vogel said. “We’ve been struggling a little bit and a change in environment should be good for us.”

It can’t get much worse than their loss to the Bulls on Monday, in which they trailed by 28 points in the fourth quarter. “I don’t think you’re going to beat anybody shooting six for 32 from three in today’s game,” Carmelo Anthony said. “We can talk about a lot of other things that went on tonight, but when you shoot six for 32 from three you’re not going to beat anybody unless you’re on point in every other aspect of the game. And that’s how the night went for us.

“There’s no excuses for that. We shot 18% tonight from three and we can make a couple more threes the game might change. But it’s one of them nights. It’s just one of them nights we weren’t getting a lot of looks, we weren’t making the shots that we were taking. I don’t know what else to say about that.”

Their goal for the trip is simple, according to Anthony.

“Get the win Wednesday,” he said. “Then from that point on, you’re on the road, so that first game on the road is always a big one to get. We know it will be tough going in there and getting it but we believe in ourselves and we feel that we’ve got the team to go in there and do it. Why not go on the road and start it off with a win?

“Wednesday for sure is very big on our list.”

Every other game should be just as big for the Lakers, who hope being in each other’s company for their cold-weather odyssey to Milwaukee, Boston, Detroit, New York and Indiana might be just what they need now.

“It creates more togetherness, cohesiveness and finding ways to lean on each other,” Westbrook said of the opportunity for players to bond while away from home. “We know you go on the road, you’re going against the home crowd so you have no choice but to lean on each other. If you don’t, you don’t have a chance to win.”

Forward Talen Horton-Tucker, who scored a career-high 28 points Monday and tied for the team rebounding lead with six, believes this trip is coming at a good time for the Lakers and can help them become more cohesive on and off the court.

“The road is definitely a place for us where our bond has to come together,” he said. “The whole team just has to jell a little bit more on the road. We know we’re going to be just with each other. We have no choice but to get that chemistry up, so we’re just going to try to get better from here.”

The Bucks (6-8) have lost their last two games and have allowed their opponent to score 100 or more points in all but one game. But as the defending champions they’ll provide a measuring stick for the Lakers as they approach the one-quarter point of the season. Anthony said 15 games weren’t enough to evaluate the team but the Lakers will reach the 20-game mark by the end of this trip. It won’t be too early to pass judgment then.

They haven’t gotten their act together yet but they must take it on the road, anyway. They can return as a team bonded by adversity or as a team still seeking an identity.

Denial of responsibility! NewsUpdate is an automatic aggregator around the global media. All the content are available free on Internet. We have just arranged it in one platform for educational purpose only. In each content, the hyperlink to the primary source is specified. All trademarks belong to their rightful owners, all materials to their authors. If you are the owner of the content and do not want us to publish your materials on our website, please contact us by email – [email protected]. The content will be deleted within 24 hours.
Actbest sports newsColumnLakersnews update sportsnewsupdateRoadshow

What time is the NFL game tonight? TV schedule, channel for…