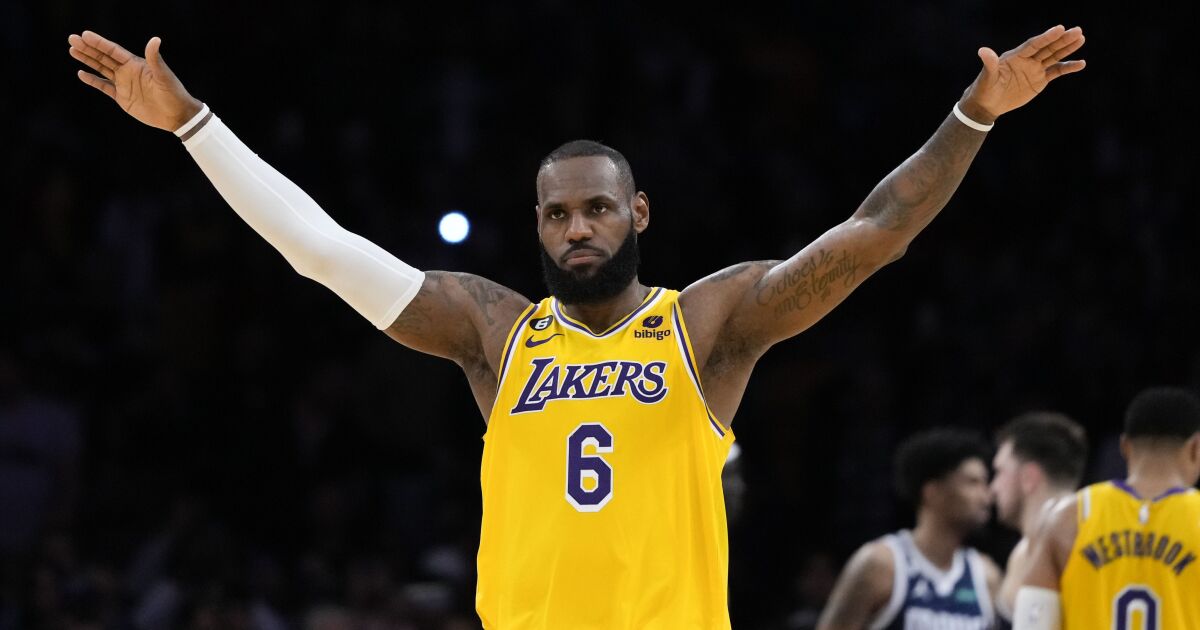 The question was posed to Troy Brown Jr., but LeBron James couldn’t resist answering while he finished dressing, about 20 feet away in the Lakers’ locker room.

Had Dallas forward Tim Hardaway Jr. committed a foul on Brown’s potential game-winning shot just before the end of the fourth quarter against the Mavericks on Thursday, though the refereeing crew chief later defended the decision not to call a foul?

The cameras were rolling, ready to record Brown’s response. But before he could get started, a voice coming from off camera — clearly James’ tones — said a blatant foul had been committed, throwing in some not-safe-for-the-airwaves expletives to emphasize his point.

Later, at the customary postgame news conference, James held back from repeating or adding to his earlier instinctive raw criticism. His restraint was admirable, especially after he had spent a season-high 46 minutes and 45 seconds on the court and was outplayed by Luka Doncic as the Lakers opened the second half of their schedule with an entertaining but ultimately empty 119-115 double-overtime loss at Crypto.com Arena.

James hasn’t exploded over the Lakers’ circumstances this season, though he certainly has had reason to vent about their losses, their constant injuries, their faulty roster construction, and their inability to crack the top 10 and worm their way into the play-in. Imagine that: For the Lakers, who have championships in their DNA, reaching 10th place or higher this season would be a major accomplishment.

James, who had missed the Lakers’ previous game at Denver because of left ankle soreness, had what he called an off-night while scoring 24 points and moving 399 points away from passing Kareem Abdul-Jabbar to become the NBA’s all-time points leader. He seemed to lack his usual energy physically and emotionally, and he missed all six shots he took in the two overtime periods.

A look at LeBron James’ pursuit of Kareem Abdul-Jabbar for the all-time scoring record.

What he has done at 38, in his 20th NBA season, is remarkable. But even he can’t be expected to carry a team that has used ever-changing rotations and has too many players who are better suited for G-League duty.

So far, he hasn’t gone beyond dropping occasional hints about his frustrations, as he did on Thursday in discussing why the Lakers have played unevenly in crunch time and haven’t regularly been able to finish off opponents.

“The one consistent thing that we have is a billion different lineups. That’s the most consistent. You hear what I’m saying?” he said.

Players’ lack of familiarity with one another is only one part of that.

“It’s not about trust, because we have trust with whoever is on the floor. But at the end of the day, teams have closing lineups. And we got so many guys that are in and out of the lineup and right now we got a lot of guys that are banged up,” he said. “So, it’s almost like, who is in a good rhythm that night is going to be probably on the floor along with myself and Russ.”

He was referring to Russell Westbrook, who had a team- and season-high 28 points as the Lakers bench outscored the Mavericks’ bench — which was only four deep — by an absurd 62-14. Westbrook’s production off the bench has been near-miraculous, and credit to coach Darvin Ham for persuading Westbrook to accept and enjoy the sixth-man role.

But there haven’t been enough other constants this season to make the Lakers anything better than 19-23, a team capable of some good spurts after their horrendous 2-10 start but a team not even able to reach 10th place in the West. They were 21-21 at the same point last season, shortly before Anthony Davis injured his right foot and they took a nosedive after the All-Star break, which kept them out of the play-in.

Davis (right foot stress injury) is out of the lineup long term again. Also missing on Thursday for various causes were Austin Reaves, Patrick Beverley and Lonnie Walker IV. James grimly read off the list when asked whether he has the patience to wait for the Lakers to get to the point they want to reach.

“I think ever since we made the trade for AD to bring him here, our whole thing was about health. It’s not changed,” James said. “You [reporters] asked us before the season started, ‘Do we think Russ can work?’ And I said, ‘How can I know that if we’ve not been on the floor together?’ I think you guys said we were on the floor together like 21 games last year, so we haven’t had the best of luck of health, I would say. Especially this year, now, again.

Patience, he acknowledged, hasn’t been one of his strengths. One of his best teachers in that department has been Mavericks coach Jason Kidd, the former Lakers assistant who was James’ teammate on the 2008 U.S. Olympic basketball team and remains a close friend.

“He never gets too high and never gets too low and always has a great calming voice about the positive side of things. I haven’t been great at that,” James said. “But I definitely, I listen to him. It’s just, it’s hard to apply sometimes.”

It’s tough to be patient when the future looks fuzzy and the only constant is change. The Lakers might soon pass the point where acquiring an impact player by trading their prime chips — the two first-round draft picks they hold — wouldn’t make a big enough difference to salvage this season.

Denial of responsibility! NewsUpdate is an automatic aggregator around the global media. All the content are available free on Internet. We have just arranged it in one platform for educational purpose only. In each content, the hyperlink to the primary source is specified. All trademarks belong to their rightful owners, all materials to their authors. If you are the owner of the content and do not want us to publish your materials on our website, please contact us by email – [email protected]. The content will be deleted within 24 hours.
best sports newsColumncontinuesfrustratingJamesLakersLeBronnews update sports

46 titles are being delisted from the Xbox 360 Marketplace