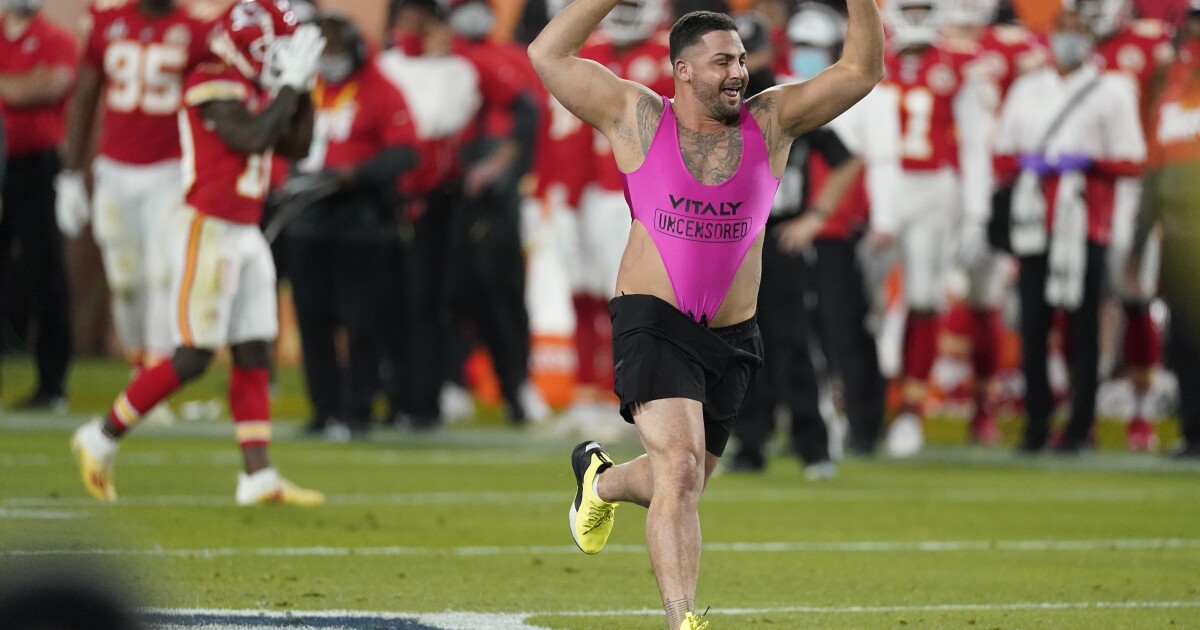 For many of the 96 million people who viewed last year’s lopsided Super Bowl, the most exciting moment came in the fourth quarter, when Yuri Andrade charged onto the field.

Wearing a bright pink women’s swimsuit, Andrade raced from the 40-yard line to the end zone before seven security guards tackled and pinned him. Along the way, he tugged his black shorts half off to reveal a thong wedged deep in his butt cheeks, a sight that left crowds roaring, ensuring his 15 minutes of infamy.

But Andrade was no lone exhibitionist. He couldn’t have done it without the trickery of two friends, one a part-time San Diego surfer and the other a Florida pornographer. And to be honest, the story does not end well for Andrade.

It began in a Tampa hotel room, as so many troubling stories do.

It was there that Douglas Charles Schaffer Jr., who occasionally calls himself “Decoy Doug,” met up with Andrade and another buddy they’d known since high school in Boca Raton, Vitaly Zdorovetskiy.

Zdorovetskiy is an internet prankster, content creator and serial interloper who has rushed the field of the 2014 World Cup final and game five of the 2017 World Series. He’s also climbed the Hollywood sign. Those are his tame antics. He’s had run-ins with law enforcement multiple times for his questionable gags, including placing a briefcase next to a guy and telling him he had 60 seconds to get away before a bomb went off.

Hopeful for publicity for his pornography website, Zdorovetskiy persuaded Andrade to streak in the pink swimsuit with the site’s name on the front. Andrade and friends also placed bets with an offshore gambling site that the game would be interrupted by a fan on the field — wagers that could have paid off nearly $400,000.

But Andrade knew he couldn’t do it alone. He needed Decoy Doug to be the bait, making a run for it first to lure guards away. Doug says that when Andrade called him, he wasn’t initially wild about the idea, “because it’s kind of gnarly.” But then another friend told him it would be “legendary stuff.” And Andrade offered to pay him, though Doug won’t say how much. So he agreed, and found himself Super Bowl-bound, in a hotel room making a map of the stadium.

For the first three-quarters of the game, they were like any other fans — buying gear, hanging out. Zdorovetskiy had paid for the tickets — spending 12 grand on them, Doug said. So there was pressure to perform. Zdorovetskiy didn’t reply to my request for an interview. Andrade yelled, “F— off,” in the background when a friend answered his phone and I asked to speak with him. I assume that meant “no comment.”

When the fourth quarter started, the duo made their play. First, they hit up a stranger sitting near them to film it, giving him Andrade’s phone and offering $300 if the guy would take the video and return the phone later that night. Then they made their way to the fence and “my boy was like, ‘All right, it’s time to go,’” Doug said.

Andrade broke left and Doug knew it was now or never. He asked the guard if he could take a picture at the fence, though he didn’t even have a camera. As soon as he was close, he made the leap over, dropping about 12 feet onto the field.

His vision went black at the edges, adrenaline roaring through his brain. He ran. It was happening.

But then he remembered he needed to get caught, so the guards would be focused on him, far away from Andrade. When the tackle came, it was hard. Then he heard the cheers, the stadium going nuts, and he knew Andrade had made it.

“I feel like that was exactly what we needed to complete the night,” Tampa Bay tight end Robert Gronkowski said in an interview later of Andrade’s run, throwing in a dig at the Chiefs single-digit performance.

“The slide into the end zone was pretty incredible,” the Gronk quipped. “He actually scored.”

The two men were arrested and charged with misdemeanor trespassing, each receiving 100 hours of community service and one year of probation. Doug’s been doing his at the Boys and Girls Club in Florida. He likes helping the kids. Zdorovetskiy didn’t face any charges, since he hadn’t been involved in the actual streaking.

Doug says Andrade’s a good guy, but since then, they’ve been “on two different paths.”

Andrade’s pink getup went viral, according to plan. Doug’s run barely registered a blip. The guy they paid to film it actually returned their phone.

The online gambling company refused to pay up after Andrade admitted to the betting scheme in a radio interview. Still, he seemed to revel in the attention. Dwayne “The Rock” Johnson gave him a shout-out for pairing the onesie with neon yellow sneakers from the actor’s then-new line. Andrade posted it on his King Yuri Instagram account.

Despite promising the judge he wouldn’t streak again, Andrade did. He donned the pink swimsuit for a stint snowboarding in Colorado and on a cliff overlooking an alpine lake, maybe Tahoe. Those videos went up, too.

In January, a local website in Mendocino reported that Andrade was a person of interest in a possible home invasion at the site of an illegal marijuana grow.

The Mendocino Sheriff’s Department confirmed dispatchers received a call from the remote town of Gualala on Jan. 18 (that’s Wa-la-la, if you want to sound like a local), with the caller saying armed people were in his home, one with an AR-15. The caller escaped to a nearby house before deputies arrived, and despite chasing one suspect, none were apprehended.

The caller identified “Yuri” as the person attempting to kill him, the sheriff’s office said, and authorities later found 1,900 pounds of processed marijuana at the house — not a huge amount by Mendocino standards, but not nothing. Captain Gregory Van Patten of the Mendocino County Sheriff’s Office said the incident isn’t believed to be an attempted robbery, but rather a dispute “among people involved in the cultivation operation.”

The case has been referred to the local district attorney for “potential prosecution for unlawful marijuana cultivation, criminal threats, brandishing of a firearm and a physical assault,” though Dist. Atty. C. David Eyster said he hadn’t seen it yet.

No arrests have been made, and no warrant issued for Andrade. The Hillsborough County Sheriff’s Office, which oversees Andrade’s probation in Florida, says he is in good standing with them.

His friend who answered his phone said he was in Las Vegas, but it did not sound like a reliable tip.

Doug is back in Florida, though he lives part-time in Oceanside, by San Diego. He’s a surfer and party promoter, working for a friend who stages music events. He’s still on probation, but he doesn’t seem to mind. Sunday, he’ll be watching the game at a friend’s house, unless someone wants to buy him a ticket.

He’s got zero regrets about the prank. Being Andrade’s decoy was a lifetime highlight. He said he’ll tell “his kids about that s—.”

But that’s in the future. Doug wouldn’t mind a little bit more of the spotlight now.

“If any chicks are interested, I’m on Instagram,” said Doug, eager to leave some of you with that thought.

Denial of responsibility! NewsUpdate is an automatic aggregator around the global media. All the content are available free on Internet. We have just arranged it in one platform for educational purpose only. In each content, the hyperlink to the primary source is specified. All trademarks belong to their rightful owners, all materials to their authors. If you are the owner of the content and do not want us to publish your materials on our website, please contact us by email – [email protected]. The content will be deleted within 24 hours.
best sports newsBowlColumnDiegoenablednews update sportsnewsupdateSan

Dead Island 2 Reportedly in a “Decent State,” Could Possibly Release This Year

Karman to face Sahaja in first round again

How to transfer LastPass to Bitwarden

‘Persona 5 Royal’ for PC and Xbox will include all…