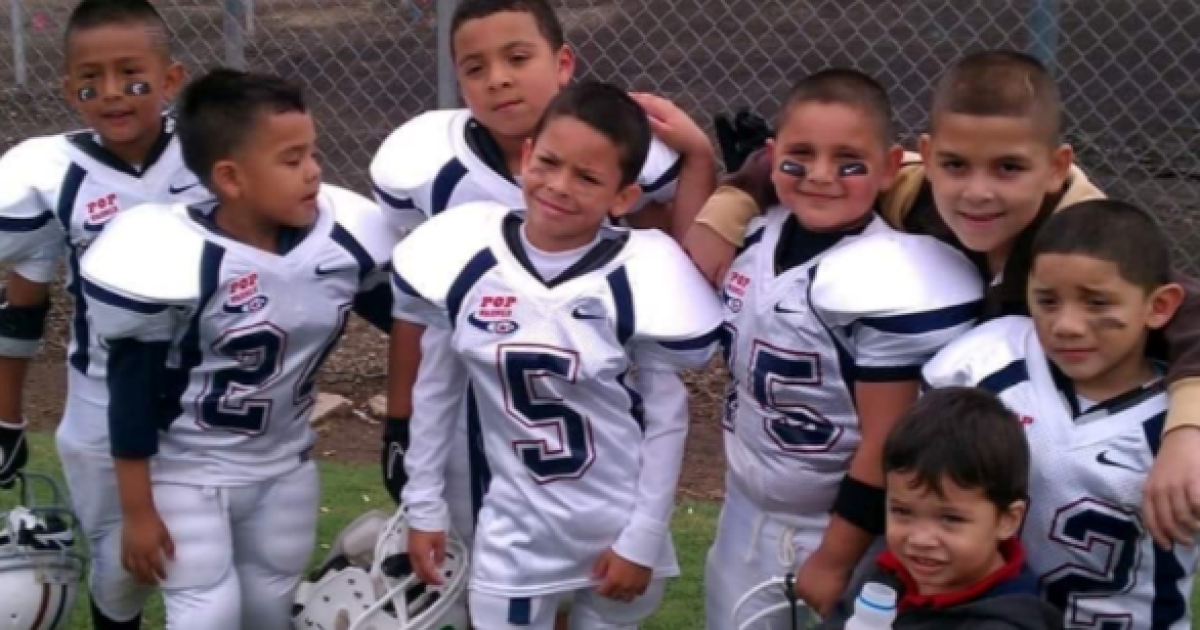 Column: This Thanksgiving is different for Garfield’s Jayden Barnes and his family

The Barnes house is preparing for its annual Thanksgiving activities. The seven boys and girls, ranging in ages from 22 to 6, participate in street football outside their home in Compton, with father Jamaal and mother Leslie serving as the quarterbacks.

“This house is very competitive, no matter what it is,” said Jayden, a junior receiver and defensive back for Garfield’s football team. “He never loses. He always cheats when he plays. That’s how he wins.”

Yes, the smack talk has begun before turkey and yams have been served.

Unfortunately, Jayden has been barred from playing in this year’s family classic.

“This year is different,” Jamaal said.

The family is taking no chances with a City Section Open Division championship on the line on Saturday at Valley College when Garfield plays Lake Balboa Birmingham, so the threat of injury will force Jayden to choose sides. Something tells me mom is getting his support, since she’s doing the cooking.

The Barnes family has ingrained itself in the East Los Angeles sports experience even though it came by accident. When Jayden was 5 and looking for a youth football team, his local program folded. East Los Angeles’ team accepted him and the rest is history. He has been playing youth football with more than a dozen of the Garfield players for years and now they’re in position to be the best in the City Section.

“We’re praying for a City championship in the house,” Jamaal said.

Jayden, a 6-foot, 170-pound junior, leads the team with 29 receptions for eight touchdowns. He also has seven interceptions.

Jamaal, the family photographer, has so many photos of his children playing sports through the years that he could put together his own Sports Illustrated magazine.

Jayden used to be part of the “breakfast club,” waking up when he heard his father’s alarm to train early in the morning. He’s developed into a standout athlete who stars in football and basketball.

“It was never hard for me to get him to work out,” Jamaal said. “He would nag you, ‘Are we doing anything today?’ ”

Dad is rooting for his son’s football season not to end this weekend even though it means he might not have his All-City point guard for several weeks. Daughter Jada, 15, is a sophomore All-City player for the girls’ basketball team.

Although other siblings attended La Verne Bonita, Jayden has grown up around his friends from East Los Angeles.

“I’ve surrounded myself with a lot great people,” he said. “There’s a lot of tradition and everybody sticks together.”

In particular, the community comes out for big games, such as against rival Roosevelt in the East L.A. Classic, which drew a crowd of 30,000 at the Coliseum earlier this season. Garfield should have another strong fan representation at Valley College, making Birmingham feel as if it’s a road game.

On Thursday morning, Jayden will be practicing with the football team, then return to watch the family battle. Then it’s time to feast on his mom’s cooking. They’ll be watching football on TV and doing “smack talk to see who gets the food first,” Jayden said.

All will be nice to mom, no matter who wins the street football game.

“She’s our backbone,” Jamaal said. “Sometimes we let her win so she can make our food with love.”

Denial of responsibility! NewsUpdate is an automatic aggregator around the global media. All the content are available free on Internet. We have just arranged it in one platform for educational purpose only. In each content, the hyperlink to the primary source is specified. All trademarks belong to their rightful owners, all materials to their authors. If you are the owner of the content and do not want us to publish your materials on our website, please contact us by email – [email protected]. The content will be deleted within 24 hours.
Barnesbest sports newsColumnfamilyGarfieldsJaydennews update sportsnewsupdate