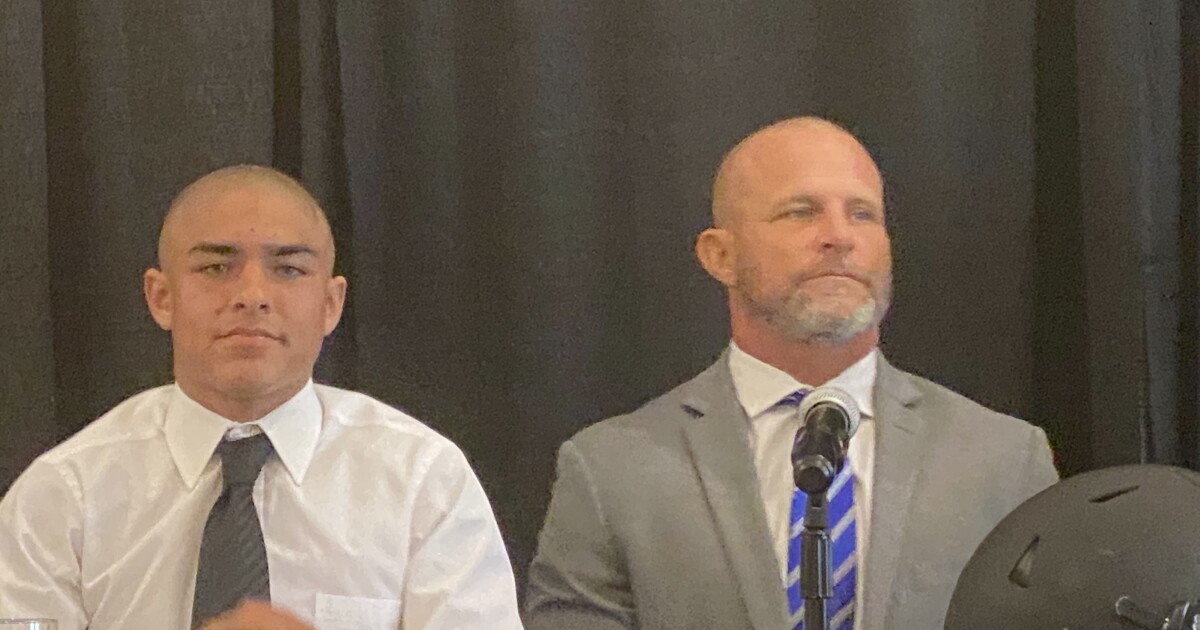 Football players have lots of routines on Saturday mornings after games. They stretch, they watch film, they sit in a bucket of ice trying to reduce their aches and pains. Then there’s Houston Thomas, running back for Southern Section Division 1 finalist Anaheim Servite. He goes bowling with a couple of teammates.

“The workout gets the soreness out and the bowling is just for fun,” he said.

Not since 2015 has there been a Division 1 final that didn’t include Bellflower St. John Bosco and Santa Ana Mater Dei. Servite (11-2) was able to crash the party with a 40-21 semifinal win over St. John Bosco on Friday night and will play top-seeded Mater Dei (10-0) on Friday at Long Beach Veterans Stadium.

Thomas, the son of head coach Troy Thomas, rushed for 134 yards, including a 71-yard touchdown run, and had an interception in the win. He remembers being 7 and 8 years old when Servite won consecutive championships in 2009 and 2010. Thomas enrolled in 2018 when his father returned as coach for a second stint after being let go as head coach at Encino Crespi. Much had changed. St. John Bosco and Mater Dei were dominating their rivals and Servite was no longer in the championship conversation.

“It was cool witnessing it as a little kid and actually beating them as a player is great,” he said.

Fifita has had plenty to do with Servite’s rise. Besides his being a prolific player, Fifita’s arrival in 2018 helped attract a number of his friends to join him, including receiver Tetairoa McMillan. Houston Thomas’ arrival also had an effect. Teammates have seen his work ethic, love for the game and willingness to embrace whatever sacrifice is needed to succeed.

There’s a real hunger, togetherness and loyalty fueling Servite’s charge into the upper echelon of the football hierarchy this season. Talent matters, but so does commitment, and the Friars have spent four years preparing for this moment.

“None of us want this to end,” Houston Thomas said. “We talk about it constantly. One more week being together.”

Thomas, the head coach, and Thomas, the running back, will be practicing too, then heading home for a special Thanksgiving. Houston’s younger brother, Maddox, 14, is expected to join the program as a freshman running back next season. Houston served as the guinea pig for what would happen if they played for a demanding father/coach.

“I think it’s been so great for me and our relationship,” Houston said. “We’ve grown so much closer and I’m really appreciative I’ve had this opportunity to play for him.”

Denial of responsibility! NewsUpdate is an automatic aggregator around the global media. All the content are available free on Internet. We have just arranged it in one platform for educational purpose only. In each content, the hyperlink to the primary source is specified. All trademarks belong to their rightful owners, all materials to their authors. If you are the owner of the content and do not want us to publish your materials on our website, please contact us by email – [email protected]. The content will be deleted within 24 hours.
best sports newsColumndrivingforceshopesHoustonnews update sportsnewsupdate