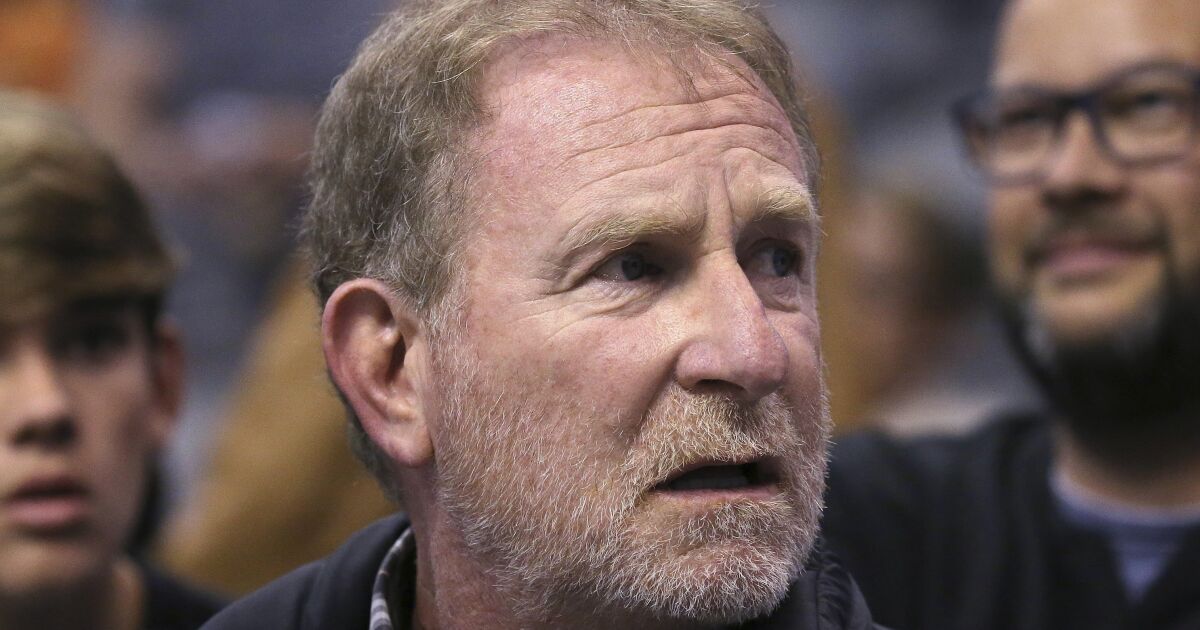 Adam Silver said the NBA “addressed it” — the “it” being the behavior of Phoenix Suns owner Robert Sarver. And the addressing it? Well, it was just a half-measure, the NBA leaving it to its players and business partners to finish the job.

If the league wants to be rid of him — and it’s pretty clear it should — it’s leaving the dirty work to everyone else, including the fans.

The NBA suspended Sarver for one season and fined him $10 million Tuesday for a litany of unsavory behavior directed at women and people of color. Over an 18-year span, he repeated use of the N-word at least five times despite being admonished. He demeaned pregnant employees, crossed all kinds of lines with sexual comments and forwarded pornographic jokes in emails.

The NBA’s nearly 12,000-word report stretches over 43 pages painting Sarver at best as some kind of early-season version of Michael Scott from “The Office” ignorant of societal norms and, at worst as another Donald Sterling, someone regularly engaging in racism and misogyny.

Neither is a good representative for the NBA.

Players sounded off, including LeBron James in a series of tweets:

“Read through the Sarver stories a few times now. I gotta be honest…. Our league definitely got this wrong. I don’t need to explain why. Y’all read the stories and decide for yourself. I said it before and I’m gonna say it again, there is no place in this league for that kind of behavior. I love this league and I deeply respect our leadership. But this isn’t right. There is no place for misogyny, sexism, and racism in any work place. Don’t matter if you own the team or play for the team. We hold our league up as an example of our values and this aint it.”

Suns point guard Chris Paul tweeted much of the same:

“Like many others, I reviewed the report. I was and am horrified and disappointed by what I read. This conduct especially towards women is unacceptable and must never be repeated. I am of the view that the sanctions fell short in truly addressing what we can all agree was atrocious behavior. My heart goes out to all of the people that were affected.”

The report concludes that Sarver violates the league’s standard of behavior for owners by committing “conduct prejudicial or detrimental to the Association.”

It’s all there, one story of — again at best — willful ignorance after another.

So why then, in addressing Sarver’s behavior, did the league fail to take the seemingly proper step of ousting him?

“There are particular rights here of someone who owns an NBA team as opposed to somebody who is an employee,” Silver said.

There it is, the limits of the NBA’s altruism inarguably set, leaving the real work to its laborers, partners and fans to finish the job.

The league and its report suggests that not everyone has a Sarver horror story to tell, that there’s context that needs to be kept private. But that’s all immaterial — by merely being in this position, he’s a bad partner for the NBA. And every page of the investigative report makes that even clearer.

Now, the NBA cares…but can only do so much. It exists at the pleasure of league ownership, a group generally uneasy with the idea of asset removal because of misdeeds. Push Sarver out? That was going to fall to everyone else.

Silver did acknowledge there was more he could’ve done — a lengthier suspension (Sarver’s is the second-longest ever for an owner) could’ve been handed down.

“I don’t have the right to take away his team,” Silver said. “I don’t want to rest on that legal point because of course there could be a process to take away someone’s team in this league. It’s very involved, and I ultimately made the decision that it didn’t rise to that level.”

The league, in a technical sense, didn’t take away Sterling’s team either, though the lifetime ban would have made Sterling the NBA’s first NFT owner, with a product he couldn’t see or touch.

After the former Clippers owner was caught on tape disparaging his Black players and Hall-of-Famer Magic Johnson, Silver banned Sterling for life, leaving him little choice but to sell — punishment that led to a $2 billion putting the “gross” in “gross earnings” for an owner with a long-time reputation for cutting corners, disrespecting players and engaging in discriminatory practices as a businessman.

The league never punished Sterling for any of that other stuff, acting only after the tape was made public by his former girlfriend, V. Stiviano.And the NBA’s action, well, that came after public opinion against Sterling was so strong that major sponsorships pulled their company logos from inside Staples Center during the NBA playoffs in protest. Players considered boycotts. Billions were at stake, so the NBA moved.

“I would rather not be partners with somebody who has the views that were expressed on [Sterling’s] tapes.” Sarver said then. “You know my track record on these issues. A big part of what the NBA is about is promoting diversity, tolerance and respect for all people.”

Sarver’s legal team made sure to include this quote in their rebuttal to the NBA’s findings.

Of course, Sarver’s words about Sterling came as the corporate backing of the Clippers and the NBA swayed under immense public pressure. Sterling’s story was tabloid gold, with an Anderson Cooper interview and ongoing playoff games keeping it from fading.

But eight years later, information and outrage flow at a much higher speed, the internet and algorithms making sure we’re never too far from scandal. Maybe that pushes Sarver into a year’s hibernation, his absence talked about only if the Suns return to the NBA Finals for the second time in three years. Robbing him of the opportunity to lift a trophy would certainly add heft to the punishment.

But again, the point should be whether Sarver is harming the NBA as a whole.

The report makes that clear. Tweets from James and Paul make it clearer. And, perhaps businesses that advertise with the Suns and Sarver will reevaluate the partnership.

After 18 years of boorish behavior from Sarver, that’s the most likely path to new ownership in Phoenix.

Denial of responsibility! NewsUpdate is an automatic aggregator around the global media. All the content are available free on Internet. We have just arranged it in one platform for educational purpose only. In each content, the hyperlink to the primary source is specified. All trademarks belong to their rightful owners, all materials to their authors. If you are the owner of the content and do not want us to publish your materials on our website, please contact us by email – [email protected]. The content will be deleted within 24 hours.
best sports newscommentaryDonaldhelpsnews update sportsnewsupdateownerremove

‘Vampire Survivors’ prepares to launch out of Early Access