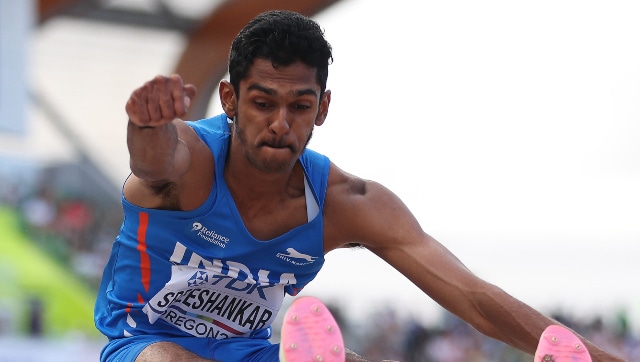 Indian athletes Murali Sreeshankar and Muhammed Anees Yahiya made it to the finals of the men’s long jump event, while Manpreet Kaur qualified for the women’s shot put final

In his group A qualification round, Sreeshankar made a jump of 8.05 m in his first attempt. Image credit: Twitter/@OlympicKhel

Indian athletes Murali Sreeshankar and Muhammed Anees Yahiya made it to the finals of the men’s long jump event, while Manpreet Kaur qualified for the women’s shot put final in the ongoing Commonwealth Games 2022 in Birmingham on Tuesday (August 2).

Notably, Sreeshankar and Yahiya made it to the finals after landing in the top three in the qualification rounds of their respective groups.

In his group A qualification round, Sreeshankar made a jump of 8.05 m in his first attempt. This was all the Indian needed to reach the final. He was at the top of the leaderboard from the get-go and nobody could outdo him.

At the second position was Laquan Nairan of Bahamas with best jump of 7.90 m. Jovan van Vuuren of South Africa was in the third position with the best jump of 7.87 m. The top eight athletes from the group qualified for the finals.

In the Group B qualification round, Anees was also off to a good start, making a jump of 7.49 m in his first attempt. He made a jump of 7.68 m in his second attempt and another 7.49 m in his third attempt, finishing with the best of 7.68 m.

Meanwhile, Manpreet Kaur qualified for the women’s shot put final with the best effort of 16.78 metres. She finished fourth in her qualifying group and seventh overall in the event. In her three attempts, Manpreet registered throws of 15.83m, 16.68m and 16.78m.

The 32-year-old will now aim for the podium finish on Wednesday (August 3), when the final of women’s shot put is scheduled to take place.

Denial of responsibility! NewsUpdate is an automatic aggregator around the global media. All the content are available free on Internet. We have just arranged it in one platform for educational purpose only. In each content, the hyperlink to the primary source is specified. All trademarks belong to their rightful owners, all materials to their authors. If you are the owner of the content and do not want us to publish your materials on our website, please contact us by email – [email protected]. The content will be deleted within 24 hours.
Aneesathletesbest sports newsCommonwealthfinalsSportsFirstpostgamesKaur

YouTube Tips: Top 5 Features That You Would Want To Try Out Now | Digit