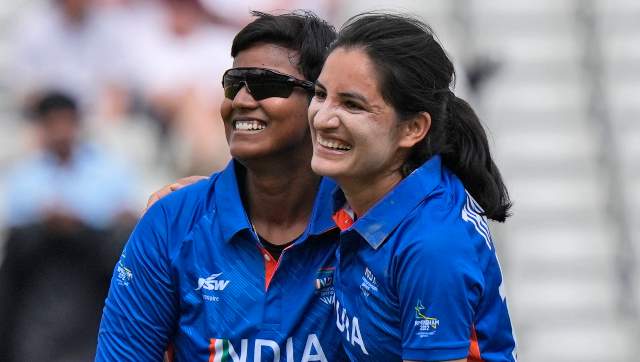 India Women have successfully confirmed their berth in the semi-final of the Birmingham Commonwealth Games 2022 by securing a massive 100-run win over Barbados Women in their final group league match on Wednesday.

Making the best of a must-win situation, the Harmanpreet Kaur-led side displayed great cohesion to outplay Barbados in every department. The official handle of BCCI Women has shared a video which features Jemimah Rodrigues, Deepti Sharma and Renuka Singh talking about their journey so far in the prestigious CWG 2022. The trio can be discussing India Women’s impressive run in the tournament till now

Jemimah Rodrigues, who stole the show in the previous fixture with an unbeaten 46-ball 56, can be seen hosting the interview session. When she asked her teammates how they were feeling after their magical victory, Renuka Singh noted, “It is a great feeling to qualify for the semi-final in the first appearance in a major event like the Commonwealth Games.” Deepti Sharma also expressed her joy at the same. According to the senior member of the unit, the team is just following certain plans and focusing on a single match at a time.

On the other side, Deepti Sharma and Renuka Singh visited the Commonwealth Village to watch Indian Badminton star PV Sindhu and India Women Hockey Team in action. Referring to their visit, Renuka Singh said that it was her dream to watch PV Sindhu live on the court. She asserted, “I was having goosebumps while enjoying the close game.” Sindhu is in good form and has inched closer to bringing a gold metal to the country. Deepti Sharma also said that it was a confidence booster for her to watch the game of the women’s Hockey unit. “Watching them gives us the motivation to bring Gold for India,” Jemimah Rodrigues added.

Jemimah Rodrigues also conveyed her feeling on being the headline maker of the day. She thanked the entire squad for giving her the chance to bat at no 3. “As no. 3 was always my preferable position to bat, it gave me huge confidence. I was just focusing on my role despite thinking about other things,” the right-handed batter told her teammates.

Jemimah Rodrigues stitched a 71-run partnership with Shafali Verma at the initial stage against Barbados and built a good foundation. Later, she enjoyed some big strokes and got boundaries at regular intervals. Her commendable knock, along with Deepti Sharma’s 34 and Shafali Verma’s 43, helped India post 162 runs on the board.

While defending the total, Renuka Sharma got another 4-fer to her name. When Jemimah Rodrigues asked her about the brilliant spell, Sharma confessed, “The crowd on the stands and the teammates as well gave me confidence during the game.” India Women will face the winner of the Group B match between England Women and New Zealand Women in the semi-final.

Denial of responsibility! NewsUpdate is an automatic aggregator around the global media. All the content are available free on Internet. We have just arranged it in one platform for educational purpose only. In each content, the hyperlink to the primary source is specified. All trademarks belong to their rightful owners, all materials to their authors. If you are the owner of the content and do not want us to publish your materials on our website, please contact us by email – [email protected]. The content will be deleted within 24 hours.
best sports newsCommonwealthDeeptiFirstcricketFirstpostgamesJemimahjourney

2022 Maruti Suzuki Alto to debut on August 18; specs leaked ahead of launch – Smartprix