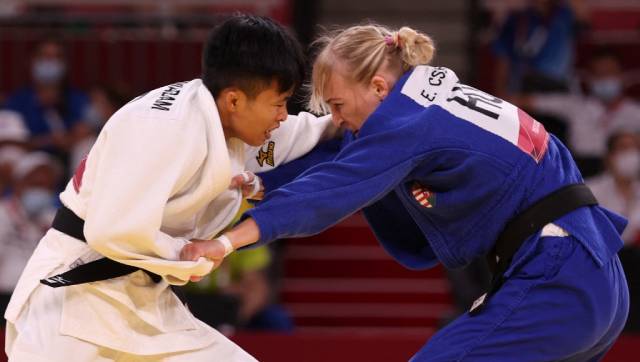 India’s experienced judoka Sushila Devi Likmabam lost the 48kg final against South Africa’s Michaela Whitebooi by a solitary point to settle for silver during the Commonwealth Games in Birmingham on Sunday.

Birmingham: India’s experienced judoka Sushila Devi Likmabam lost the 48kg final against South Africa’s Michaela Whitebooi by a solitary point to settle for silver during the Commonwealth Games in Birmingham on Monday. This was followed by Vijay Kumar Yadav’s bronze medal in the 60kg repechage round, where he defeated Cypriot Petros Christodoulides by ‘Ippon’ to add India’s second medal in judo.

Sushila’s final turned out to be a cagey affair with both the judokas keeping their defence strong throughout while the South African clinched the top honours in the golden score (sudden death) by just a point.

For Sushila, this was her second silver at the CWG as she lost the 2014 Glasgow gold medal bout in the same category.

Earlier in the day, Sushila assured the country of a medal after progressing to the women’s 48kg final, beating Priscilla Morand of Mauritius at the Commonwealth Games here on Monday.

The 27-year-old from Manipur took down Morand with an ‘Ippon’. Ippon is a move in which a contestant throws his opponent to the mat with considerable force and speed so that the opponent lands on his back. An ippon is also awarded when a contestant immobilizes his opponent with a grappling hold-down for 20 seconds, or when an opponent gives up.

A sub-inspector with Manipur Police, Shushila had progressed to the quarterfinals with a win over Harriet Bonface of Malawi earlier in the day.

produced a superb performance to advance to the bronze medal match with a win by ‘Waza Ari’ over Dylon Munro of Scotland.

A ‘waza-ari’ is awarded after a player throws his opponent with control and accuracy, but not to the extent of an ippon.
The 26-year-old Yadav, who has won the Commonwealth Championships in 2018 and 2019, had lost to Joshua Katz of Australia in the quarterfinal but made amends in the reprechage. He will face Petros Christodoulides of Cyprus in the bronze medal match.

Jasleen Singh Saini will also fight for a bronze medal after losing the men’s 66kg semifinal to Scotland’s Finlay Allan.
Saini, who sailed into the semifinals earlier in the day, lost after the Scot performed an ‘Ippon’ in a match that lasted a little less than two and half minutes.

Click here for our complete coverage of the 2022 Commonwealth Games.

The 24-year-old Saini, however, has a chance to earn a podium finish as he will compete in the bronze medal play-off against Australian Nathan Katz later tonight.

Suchika Tariyal has already reached the bronze medal round after defeating Donne Breytenbach of South Africa in the women’s 57kg repechage.

India had won two silver and two bronze at the Glasgow 2014, their best ever show in judo.

(With inputs from PTI)

Denial of responsibility! NewsUpdate is an automatic aggregator around the global media. All the content are available free on Internet. We have just arranged it in one platform for educational purpose only. In each content, the hyperlink to the primary source is specified. All trademarks belong to their rightful owners, all materials to their authors. If you are the owner of the content and do not want us to publish your materials on our website, please contact us by email – [email protected]. The content will be deleted within 24 hours.
best sports newsbronzeSportsclinchesCommonwealthDeviFirstpostgamesJudo