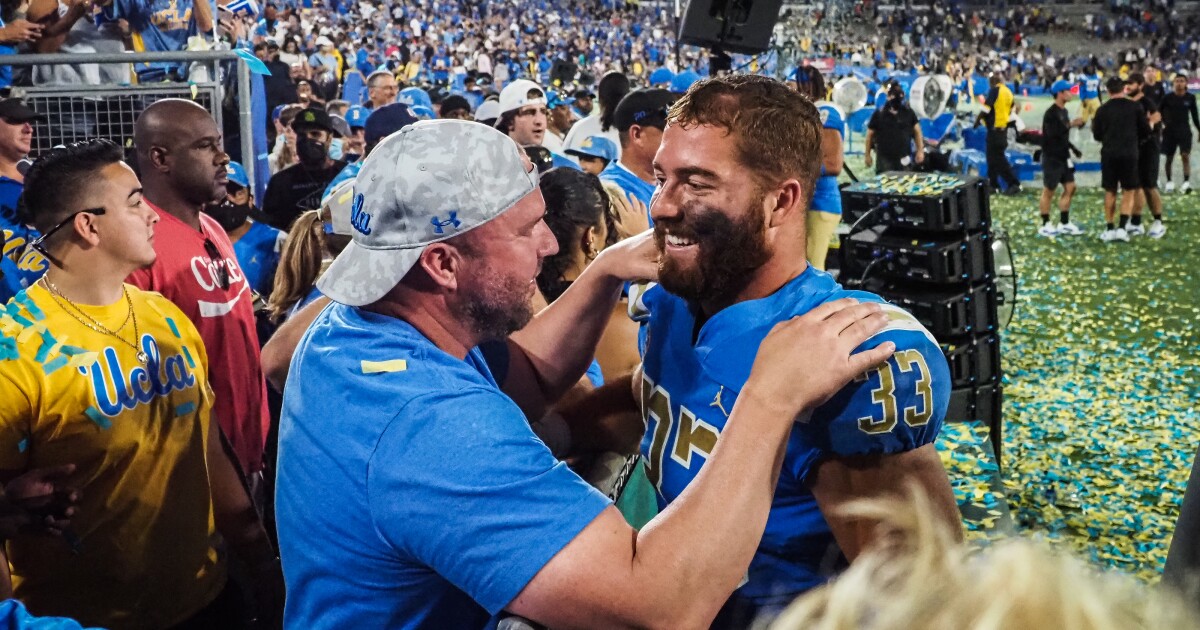 The father-son talks usually started with a text message.

“How’s it going?” David Calvert would ask his son Bo, the UCLA linebacker.

With that, David would grab his car key and head out the door of his Westlake Village home. Sometimes he’d pick up Bo from his campus dorm and head over to BJ’s Restaurant & Brewhouse in Westwood Village for a dessert pizza.

Their chats on those dark nights three years ago invariably ended in the parking lot outside Bo’s dorm while sitting inside David’s black Dodge Ram.

“Sometimes we wouldn’t even talk,” David said. “The last hour, we’d just sit there and he’d say, ‘OK, I’m good’ and then get out and go to sleep.”

The heavy silence reflected Bo’s inner struggles — the repeated concussions, the 16-hour days of drudgery on a team that went 3-9, the almost giving up on football.

Calvert logged his first collegiate sack a little more than a week ago in a nationally televised game against Louisiana State, surging into the backfield to pummel Tigers quarterback Max Johnson.

In the Rose Bowl stands, David Calvert celebrated the play as well as the son whose perseverance symbolized his resurgent team.

“I thought, man, I’m glad he pushed through that freshman year,” David said.

On the field, Bo contemplated the payoff finally arriving for his blind belief in the Bruins.

Football, baseball or basketball, it didn’t matter — youth sports seasons often ended with a championship and smiles all around.

More titles followed at Oaks Christian High in Westlake Village. Calvert combined a 6-foot-3, 235-pound frame with a defensive back’s speed and a defensive coordinator’s attention to detail, making him one of the top outside linebacker recruits in the country.

Calvert initially committed to USC before suffering a broken leg during his senior season of high school. The Trojans’ interest cooled and Calvert reopened his recruiting.

He visited Utah, where his father had sandwiched a brief career at safety and tight end around his Mormon mission. The Utes might have snagged another Calvert had new UCLA coach Chip Kelly not called, asking Bo to meet with him. He did, deciding to become a Bruin.

During fall training camp, there was a moment he feared he might never get to play for the team. Calvert was told to grab his playbook and go see defensive coordinator Jerry Azzinaro.

“The only thing he knew about bringing your book and going to see the coach,” David Calvert said, “was you’re getting cut.”

Nope. Azzinaro only needed Bo to switch to inside linebacker amid a rash of injuries. He recovered from a training camp concussion to make his college debut against Fresno State in September 2018 and played in five consecutive games, making nine tackles.

But the team was losing and the days were a grind. Conditioning. Practice. Classes. Film study. Team meeting. Homework. Bedtime. Rise and do it all over again.

Calvert spent many hours in the passenger seat of his dad’s car expressing his frustrations, David visiting at least three nights a week.

“When things are going sideways and you still have that schedule,” David said, “I think it’s not easy for a lot of these players, I think depression’s a real thing.”

A second concussion suffered against Arizona in late October ended Bo’s season and frightened him. He pondered a once unthinkable possibility: Should he quit football?

“I was having all these symptoms and not being able to sleep, crazy headaches, the full nine yards,” Bo said, “and I was just in a really tough place, I think, mentally.”

Bo never considered himself a quitter. A third concussion would leave him with no choice, the team’s medical staff informing him he would have to medically retire.

Another player in a similar situation left UCLA. Linebacker Jaelan Phillips transferred to Miami not long after the Bruins announced in December 2018 that he had medically retired after a series of concussions.

Other players who doubted the direction of the program also departed, leaving those who remained to seek solace in one another.

“I felt very alone in that time,” Calvert said, “but the truth is that a lot of my teammates were sort of feeling those same things … concerns of whether or not they wanted to continue here at UCLA or not or walk away from the game.”

Calvert thought about his two younger brothers, Ethan and Josh, and how he had always been their example in the sport they loved. He was the first sibling in the family to talk to a college coach. The first to go on an official visit. The first to play in a college game.

Did he also want to be the first to quit?

His father told him he would support his decision either way, but he asked him to think about what it would be like to be just a college student, separated from the one thing he had been passionate about his entire life.

Ultimately, Bo didn’t want to give up any of it — the sport, the teammates or the team they all believed was headed for success.

An unlikely turning point preceded Calvert’s return. UCLA announced the week of its 2019 opener against Cincinnati that he would be suspended indefinitely for violating an unspecified NCAA rule.

More than two years later, it remains a queasy topic.

“Honestly,” Calvert said last week, “I’ve really just mentally moved on from that point and I don’t want to open that up too much.”

The suspension came with upside in that the Bruins could make one of their top defensive players the leader of their scout team. Calvert bonded with coaches over practice plans and learned more about the intricacies of game preparation.

His first career start came in his return, during the season’s final game against California. Signs of the team’s long-awaited breakthrough arrived early in the 2020 season, when the Bruins made defensive stops routine for the first time under Kelly.

“We were rising up,” Calvert said, “and you could see the life.”

His father’s words resonated even when they weren’t together.

Tap into that inner calm place when things are going crazy around you. Evaluate what’s coming and anticipate your next move.

It helped that as Calvert moved back to outside linebacker for his senior season, the thousands of practice and game repetitions he had accumulated left him feeling prepared for anything. The same went for teammates on a defense that started a senior at every position.

Tendencies that Calvert didn’t notice earlier in his career, like an offensive lineman’s heavier hand placement after checking the play probably indicating a run, have become instinctive.

The Bruins (2-0) held LSU to 49 rushing yards and 2.0 yards per run during a 38-27 victory, showcasing the sort of dominance that was once confined to the game footage their coaches showed them involving other teams.

Calvert might do it beyond this season, having been accepted into a UCLA transformative coaching and leadership graduate program that would allow him to play in 2022 while using the extra year of eligibility granted by the COVID-19 pandemic.

He would certainly be welcomed back by the coach who called him “one of the real true leaders” of the team, citing his smarts and relentlessness.

“Everything Bo’s accomplished, he’s earned,” Kelly said. “Nothing’s been given to Bo.”

Before his big moment against LSU, Calvert engaged in his usual pregame routine with his father. Bo scanned the Rose Bowl stands, spotted David in the family section and gave him a wave. David waved back.

Making the connection, the Tigers fans surrounding David befriended him. Ignoring the purple and gold on their shirts, they cheered the No. 33 in blue and gold, giving David high-fives and hugs following Bo’s sack.

Father and son embraced after the game on a stadium concourse, confetti floating overhead.

“This is what it was all about,” David said, straining to be heard among the din of the crowd.

Bo laughed, mindful of the milepost as well as the distance left to cover.

“Yep, it is,” he said. “But I’m already shifting to get ready for next week.”

There were more games to play, more talks to come, a father and son delighting in what might lie ahead.

Denial of responsibility! NewsUpdate is an automatic aggregator around the global media. All the content are available free on Internet. We have just arranged it in one platform for educational purpose only. In each content, the hyperlink to the primary source is specified. All trademarks belong to their rightful owners, all materials to their authors. If you are the owner of the content and do not want us to publish your materials on our website, please contact us by email – [email protected]. The content will be deleted within 24 hours.
Loading...
best sports newsCalvertconcussionscrusheddefensedepressionleadsnews update sports