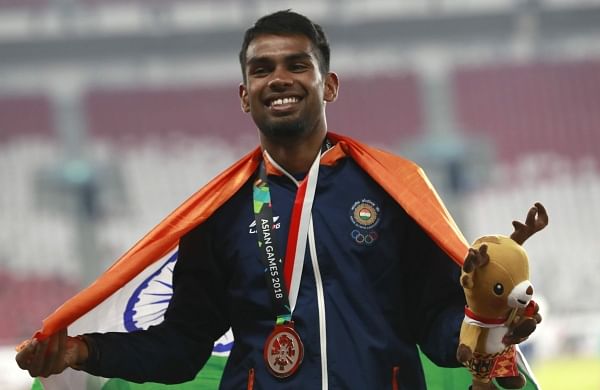 CHENNAI: Dharun Ayyasamy wears a determined expression on his face as he jumps past the 10 hurdles needed to finish the race but his over-worked immune system — fresh from battling two bouts of Covid-19 in the last two years — is waging another war.

Even before boarding the flight to leave Turkey following his exposure trip to Erzurum for the 7th International Sprint and Relay Cup, the mercury in the thermometer says he’s burning. “102 to 103,” he says after finishing second in the first heat of the 400m hurdles at the national inter-state athletics championships on Monday. After 36 hours in planes, trains and automobiles, he finally landed in Chennai.

One of the first ports of call, unsurprisingly, was a hospital. He was administered drips. The diagnosis arrived later. “Rat fever,” he says. Aka Leptospirosis (without treatment, the condition can potentially become life-threatening).

For want of a better phrase, he has been swimming in antibiotics — after consulting his coach, he stopped taking them for one day (Monday) in order to race without feeling its effects — and it shows. “Mudila (tired),” he says several times. “I felt tiredness in the hamstring and the glutes after my warm-up tonight.”

At some level, the national record holder in the 400m hurdles is able to see the deja vu. “Competitions munnadi, onnu maathi, onnu maathi vandhut irruku. Seri evvalavo pathachu, idhuvum pathurvom (I’m getting something or the other just before competitions. Seen a lot of things in life, this also I will see).”

Fighting this disease isn’t the only thing he’s having to do. For pretty much the last 2-3 years, he’s managing a stress fracture in his shin bone. “There were two options given to me in 2019,” he remembers. “Either surgery which would have put me out for six-nine months or manage the pain. I was okay to run with pain because I didn’t want to be out for more than six months.”

However, the latest radiology reports of the shin bone are concerning. “Three months ago, I took another x-ray and the crack seems to have become bigger (he proceeds to show a bump in his shin bone, presently covered by black tape, the problem area). Maybe after this competition, I will have a word with the coach and decide to do that if that’s the best course of action.”

The pain he feels every time he jumps over a hurdle, be it in competition or training, is… he manages a ‘mudila’. It’s so bad he does a customised training regime that’s not open to other members in the camp. “Because of my pain, the coach has altered my training regime. I do hurdles-specific training only once a week. Other hurdlers do it twice or thrice every week. Other times I do training with the 400m team.”

On Monday night, he had said he would decide on the final later. On Tuesday, his Lane, No 6, was empty. He had decided to pull out of the final in order to preserve his body for future battles.

Denial of responsibility! NewsUpdate is an automatic aggregator around the global media. All the content are available free on Internet. We have just arranged it in one platform for educational purpose only. In each content, the hyperlink to the primary source is specified. All trademarks belong to their rightful owners, all materials to their authors. If you are the owner of the content and do not want us to publish your materials on our website, please contact us by email – [email protected]. The content will be deleted within 24 hours.
Ayyasamysbest sports newsBoneboutsCOVIDDharunDharun AyyasamyFracture

Diablo boss says Diablo 4 is a “full price game,” but will have “optional cosmetics”