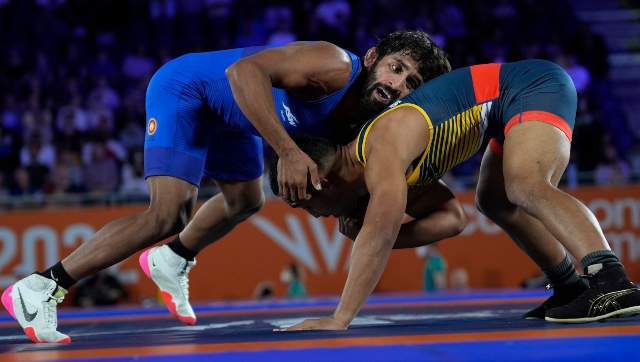 The morning wrestling session, which got underway at 10.30 am was stopped at 11.22 am. It was then announced that bouts would re-start at 12.15 pm and then it became 12.45 pm and it was further pushed to 1.15 pm and that became 1.30 pm all adding up to more than two hours of stoppage

Birmingham: A little less than an hour into the competition on the opening day of the wrestling competition in the Coventry Arena, the bouts were suddenly stopped, and the spectators were asked to leave the hall immediately.
Commonwealth Games: India schedule, Results, Medals tally

Though it was unclear what caused the stoppage and the subsequent delay, there was talk of a ‘speaker’ positioned close to ceiling had fallen in the area close to where the judges were near the wrestling mat. Clearly the Games organisers did not want to take any chances.

It is not clear whether any installation, whether lights or speakers or cameras, had actually fallen and injured anyone. But it was clearly up closer to the ceiling, where it was ‘dark’ and difficult to make out. No one could confirm what the installations were.

It was immediately felt that judges and wrestlers, too, could be in danger. Hence the stoppage and closure of all doors while work to ‘re-do’ the installations was started inside the hall.

The wrestlers had not left the stadium and most of them moved to the warm-up zones, while the spectators hung around in the corridors or sat in the restaurants inside the complex.

There has already been talk of the temporary and metallic stands and being somewhat unsafe at places. Most stadia have a lot of temporary structures that can be unsafe when there are large crowds. Also, many of the passages are very narrow and cannot take large numbers.

Soon after the opening ceremony, it took more than 45 minutes for the VIP and media sections to come through the spiral staircase.

At the time of the stoppage at the wrestling venue, only five bouts on Mat A and four on Mat B had finished. It was less than a quarter of the session. Among those who had finished their bouts were India’s Bajrang Punia, who outclassed Nauru’s Lowe Bingham by a fall in 65 kg freestyle.

Also winning his bout was Deepak Punia (86 kg) who beat Matthew Oxenham of New Zealand 10-0 on technical superiority as the latter failed to register a single point.

Since there would be a spillover of the morning session, the medal session, which is the second half, would also be delayed.

Denial of responsibility! NewsUpdate is an automatic aggregator around the global media. All the content are available free on Internet. We have just arranged it in one platform for educational purpose only. In each content, the hyperlink to the primary source is specified. All trademarks belong to their rightful owners, all materials to their authors. If you are the owner of the content and do not want us to publish your materials on our website, please contact us by email – [email protected]. The content will be deleted within 24 hours.
2hourBajrangbest sports newsChaosconcernsCWGDeepakdelay