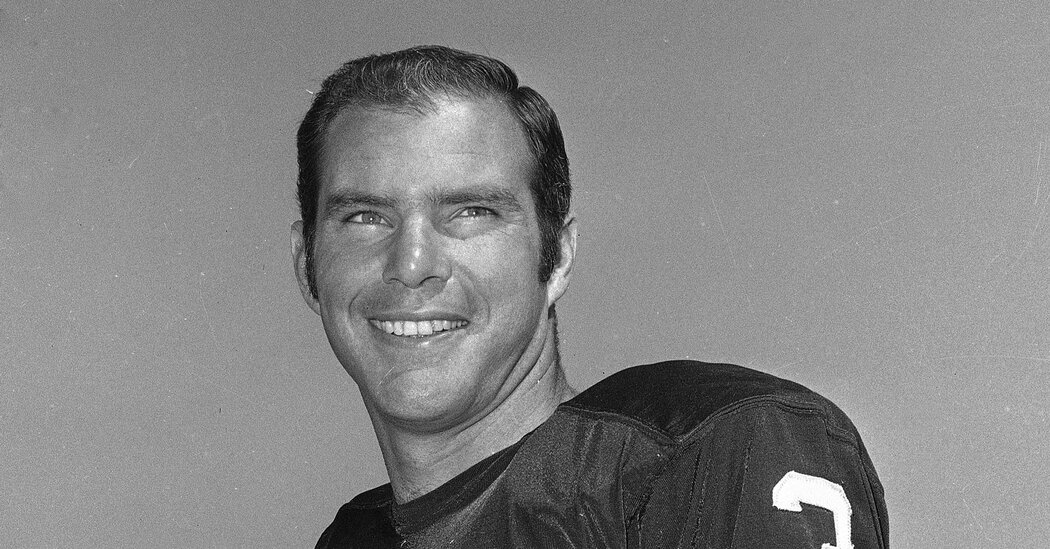 Daryle Lamonica, the quarterback known as the Mad Bomber for his powerful arm, which led the Oakland Raiders to a berth in Super Bowl II, died on Thursday at his home in Fresno, Calif. He was 80.

His son Brandon said that he died in his sleep. He added that his father had not been in ill health recently.

Lamonica became one of pro football’s leading passers in the late 1960s and early ’70s. But initially, after playing for three seasons with mediocre Notre Dame teams, he hardly seemed destined for an outstanding pro career.

Lamonica signed with the Bills, figuring he was more likely to supplant Jack Kemp as their starting quarterback than to take over for the Packers’ Bart Starr.

Playing for the Bills from 1963 to 1966, he could never dislodge Kemp, who led Buffalo to a pair of A.F.L. championships. But he embarked on a string of brilliant seasons after the Bills traded him to the Raiders.

He led the 1967 Raiders to a 13-1 regular-season record and the A.F.L. championship, throwing for 30 touchdowns and 3,228 yards. He passed for two touchdowns in the Super Bowl, which the Raiders lost to the Packers, 33-14.

Lamonica was part of an offense that emphasized precise timing between the quarterback and a receiver running his route. It was designed to create open space in the defense’s secondary, making it especially vulnerable to deep passing plays.

He played under the head coaches John Rauch and then John Madden with the Raiders. But he gave most of the credit for the offensive scheme to Al Davis, the Raiders’ owner, general manager and former coach.

“Al convinced me that the vertical game would work,” Lamonica told the newsletter SportsRaid in 2021. “He wanted me to throw the ball downfield. I’m thinking end zone all the time.”

Davis, in turn, adapted a scheme run by Sid Gilman, the San Diego Chargers’ head coach when Davis was one of his assistant coaches in the early 1960s.

“The mad bomber; they named him right,” Len Dawson, who was the Kansas City Chiefs’ quarterback when Lamonica was with the Raiders, said in 2021. “He went back and unloaded that ball. He was going for broke on every play.”

Lamonica was selected for the Pro Bowl once with the Bills and four times with the Raiders.

His favorite targets included the Raiders’ wide receivers Fred Biletnikoff and Warren Wells as well as the tight end Billy Cannon. He was protected by a strong offensive line featuring Gene Upshaw at guard and Jim Otto at center.

A sturdy 6-foot-3 and 215 pounds, Lamonica threw for 25 touchdowns and averaged nearly 250 passing yards per game in 1968. Perhaps his finest moment that season was seen by few: He threw the winning touchdown pass with 42 seconds left in the mid-November Raiders-Jets matchup at the Oakland Coliseum that became infamous as the “Heidi game.”

The Jets were leading, 32-29, with 1:05 remaining when NBC cut away from the game to begin its scheduled telecast of the children’s movie “Heidi.”

Lamonica combined with halfback Charlie Smith on a 43-yard touchdown play with 43 seconds left, his fourth scoring pass of the game, giving Oakland a 36-32 lead. The Raiders scored again after the Jets fumbled the ensuing kickoff, and Oakland emerged with a 43-32 victory.

Viewers flooded the NBC switchboard to vent outrage over missing the game’s exciting ending, prompting the network to issue an apology.

The Raiders met the Jets again in the 1968 A.F.L. championship game. Lamonica threw for 401 yards and a touchdown, but the Jets, led by their brash and flashy quarterback Joe Namath, won, 27-23, and went on to an upset 16-7 victory over the Baltimore Colts in the Super Bowl.

The Raiders were 12-1-1 in 1969 with Lamonica throwing for 34 touchdowns, including six in the first half of an October game against the Bills. He threw for another six touchdowns when the Raiders trounced the Houston Oilers, 56-7, in a playoff game, while Namath struggled in the Jets’ loss to the Kansas City Chiefs in the other first-round matchup.

When Lamonica was asked to compare himself to Namath after those games, he told Sports Illustrated: “I don’t pop off and I don’t go for the mod clothes. I’m not saying I don’t love to have a good time, but I’m discreet. My idea of the way to relax is to take off into the woods on the Monday after a game, go hunting or fishing.”

But, he added: “I respect him. He works hard at being a good quarterback.”

After the A.F.L. and N.F.L. merged in 1970, the Raiders reached the N.F.L.’s American Football Conference championship game, facing the Colts, now in the A.F.C., in the last rung before the Super Bowl. But Lamonica was knocked out of the game in the second quarter when he was hit by the Baltimore defensive end Bubba Smith, and the Raiders lost, 27-12.

Lamonica’s last playoff appearance came against the Pittsburgh Steelers in December 1972, when, on the game’s final play, Franco Harris snared a pass from a scrambling quarterback Terry Bradshaw that had ricocheted off his intended target, Frenchy Fuqua, and scored to give the Steelers a 13-7 victory in what would be remembered as the “immaculate reception.”

Lamonica lost his starting job to Kenny Stabler in 1973 and joined the California Sun of the newly formed World Football League in 1975. He saw limited action before retiring during that season.

Daryle Pasquale Lamonica was born on July 17, 1941, in Fresno, Calif., and grew up in the nearby city of Clovis. His father owned a fruit ranch, and his mother was a dietitian.

Lamonica was an all-state quarterback for Clovis High School. Playing under Coach Joe Kuharich at Notre Dame from 1960 to 1962, he threw for only eight touchdowns on teams that went 12-18 overall.

In his four seasons with the Bills and eight with the Raiders, Lamonica threw for 164 touchdowns and 19,154 yards. But he wasn’t elected to the Pro Football Hall of Fame, perhaps because he never played for a Super Bowl championship team and because he compiled his most impressive statistics in a relatively short span, from 1967 to 1972.

After leaving football, Lamonica owned a trucking business and pursued fishing and hunting. He was a host for the Fox Sports Net fishing program “Outdoors With the Pros.”

In addition to his son Brandon, he is survived by his wife, Mary Ditzel Lamonica; another son, Brian; his sister, Judy Nash; and three grandchildren.

Lamonica, who was not given to bombast, was taken aback when Cosell first called him the Mad Bomber.

“I heard it and said, ‘What a dumb name,’” he recalled to The Las Vegas Review-Journal in 2020. But in his next game, as he recounted it: “I got out over center and looked out at the left corner. We made eye contact, and he backed up two steps. I thought, ‘Ooh, I like that. Maybe that’s not such a bad nickname.’ It stuck.”

Denial of responsibility! NewsUpdate is an automatic aggregator around the global media. All the content are available free on Internet. We have just arranged it in one platform for educational purpose only. In each content, the hyperlink to the primary source is specified. All trademarks belong to their rightful owners, all materials to their authors. If you are the owner of the content and do not want us to publish your materials on our website, please contact us by email – [email protected]. The content will be deleted within 24 hours.
best sports newsDaryleDeadhardthrowingLamonicanews update sportsnewsupdateQuarterback

Breaking Down The Dracthyr Evoker, The New Race And Class Combination Coming In World Of Warcraft: Dragonflight

What Is THCV In Cannabis And How Is It Different From THC?