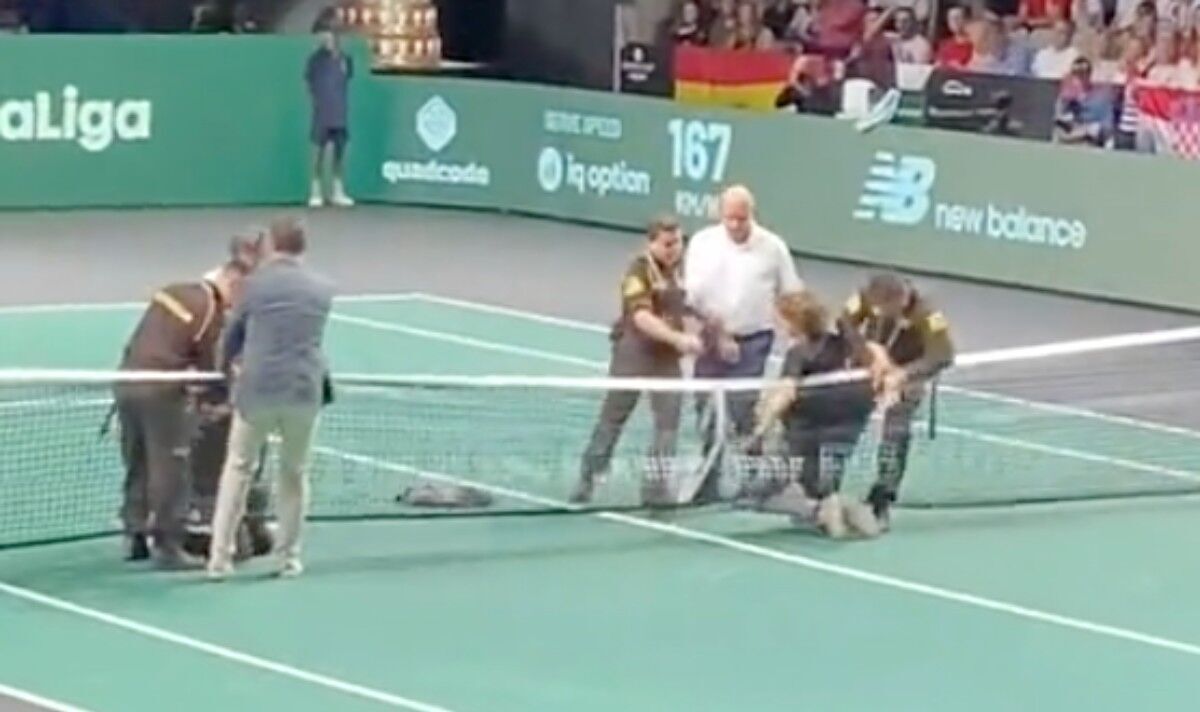 Two protesters stunned spectators during Wednesday’s Davis Cup action in Malaga when they stormed the court and attempted to tie themselves to the net. Borna Coric had just beaten Roberto Bautista Agut in the first match of the evening, but the dramatic action didn’t stop after the final point.

Coric had triumphed 6-4 7-6(4) against the Spaniard to hand Croatia a winning start to proceedings. But fans were caught by surprise as they were waiting for Marin Cilic and Pablo Carreno Busta to take to the court when a pair of protesters burst into sight.

Five members of security chased them onto the court and managed to contain the female protester while she was still standing. But the male made a darting effort to attach himself to the net, leading to a struggle with three security guards as two other figures, likely tournament organisers, watched on from close range.

After the male was finally hauled off the net, he was pinned to the ground by all three security members as his female companion was dragged away. He was put in handcuffs and led away as the crowd, clearly unhappy with the behaviour, loudly whistled the duo off.

It isn’t clear what the duo’s intentions were, which is a credit to the security in Spain for acting quickly to remove them from the court. However, the fiasco didn’t last long, and Cilic and Busta took to the court as planned in the aftermath. If Busta wins the session’s second game, he will partner Marcel Granollers-Pujol to face Nikola Mektic and Mate Pavic in the decider.

It wasn’t the first time protesting has marred a tennis event in recent months. A more violent protest marred the opening session of September’s Laver Cup in London when an individual set fire to his own arm during a match between Stefanos Tsitsipas and Diego Schwartzman.

Denial of responsibility! NewsUpdate is an automatic aggregator around the global media. All the content are available free on Internet. We have just arranged it in one platform for educational purpose only. In each content, the hyperlink to the primary source is specified. All trademarks belong to their rightful owners, all materials to their authors. If you are the owner of the content and do not want us to publish your materials on our website, please contact us by email – [email protected]. The content will be deleted within 24 hours.
best sports newsChaosCourtCupDavisembroilsnews update sportsnewsupdate

Omega’s New Bond Watch Plays a Movie on Its Back