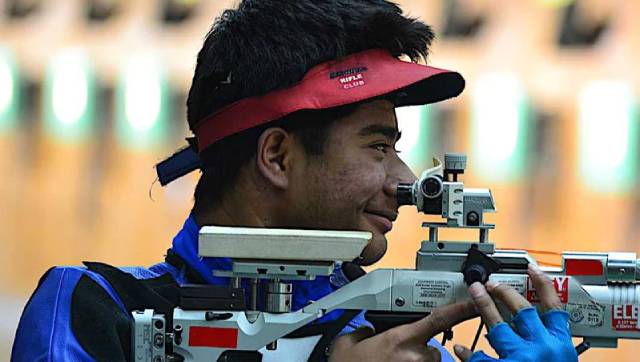 After shooting a world record score to clinch a gold medal at the Deaflympics, hearing-impaired shooter Dhanush Srikanth sets his sight at the 2024 Paris Olympics gold medal.

Kolkata: Decorated shooter-turned-coach Gagan Narang thought it was a normal working day for him at his academy ‘Gun for Glory’ in Hyderabad when mother of a 13-year-old boy came down to meet him. Of course, her request to the nine-time CWG gold medallist was to coach her son. The 2012 London Olympic bronze medallist obliged but soon learnt that it was going to be a unique case.

“The woman told me that her son is a unique case as he has hearing and speech impairment,” recalls Narang during a conversation with Firstpost. “I was taken aback as it was indeed a unique case and I didn’t know how to go forward with it.  But then I agreed to accept the challenge as I felt his remaining senses will.”

Six years since that fateful day, the teenage boy Dhanush Srikanth, still in his teens at 19 and now a 10m air rifle specialist, grabbed a gold medal at the 2022 Deaflympics on Thursday.

First thought: All you need for shooting is a pair of eyes an arm, right? Not really. Coach Narang explains how it was difficult to get going with Dhanush and how the communication barrier only made the process more challenging.

“He had to work harder than anybody else because, in the beginning, it was difficult to communicate things to him since he couldn’t read as well. It could have been something as simple as holding the gun or adjusting the stance. These instructions are easy for you and me to grasp but not for him,” says the 38-year-old mentor.

The coaching staff at the academy, including his personal coach Neha Chavan, soon figured out ways to communicate with him through a mix of drawings and self-developed sign language and things improved further after Dhanush had a hearing aid implanted, which allowed him to hear to some extent.

Narang, however, stresses that all this worked because Dhanush, who is also a taekwondo black belt before he started shooting, was eager to learn and was exceptionally focused during training sessions.

“All our efforts worked because he was really dedicated and focused when we trained. He used to watch videos of other shooters on YouTube for hours to improve his technique. Over the years, his hard work ensured that his impairment is not an obstacle and the individual nature of the sport allowed him further to grow as shooters often have to be in their space on their own while competing,” Narang explains.

Deafplympics medal in the bag, what next for Dhanush?

“Deaflympics was never the primary goal, it just came along. His mother (Asha Srikanth) was adamant from the beginning that they wanted their son to compete with the normal kids and he has been rubbing shoulders with the best shooters in the country already. He is very competitive and ambitious and that’s why despite shooting a world record score (247.5) he wasn’t happy with his scores at the finals of the Deaflympics as he wishes to shoot higher keeping the international standards in mind,” says the three-time ISSF World Cup gold medallist.

Dhanush has been a regular face in the Indian shooting circuit as he rose to prominence by winning the junior, youth, and senior titles in the Telangana State Shooting championships in 2018. His first shot at the limelight came at the 2019 Khelo India Youth Games in a U-21 gold medal as he became the first deaf boy to win a Khelo India medal while upsetting a junior World Cup medallist. Later in the year, he became the first such shooter to be selected for the U-21 national squad for the Asian Championships in Doha. The boy from Telangana made his presence felt there as well with two gold medals (individual and mixed team) at the event.

After a short break forced by the COVID-19 pandemic, Dhanush tasted further success at the ISSF Junior World Championships with the men’s team gold medal.

And 2022 will see him compete among the seniors at this month’s ISSF World Cup in Suhl (Germany). However, he did miss the bus for the 2022 Asian Games as he couldn’t make the cut during the NRAI trials but the shooter has clarity on what he wants.

“Like any other athlete, his dream is to win an Olympic gold medal and the 2024 Paris Olympics we are already preparing for. After the immediate goal at the World Cup this month, we will be preparing for the ISSF World Championships later in the year, where the Olympic quota will be up for grab,” concludes Narang. ​

Denial of responsibility! NewsUpdate is an automatic aggregator around the global media. All the content are available free on Internet. We have just arranged it in one platform for educational purpose only. In each content, the hyperlink to the primary source is specified. All trademarks belong to their rightful owners, all materials to their authors. If you are the owner of the content and do not want us to publish your materials on our website, please contact us by email – [email protected]. The content will be deleted within 24 hours.
best sports newschampionDeaflympicsDhanushFirstpostglorySportsgunsNews