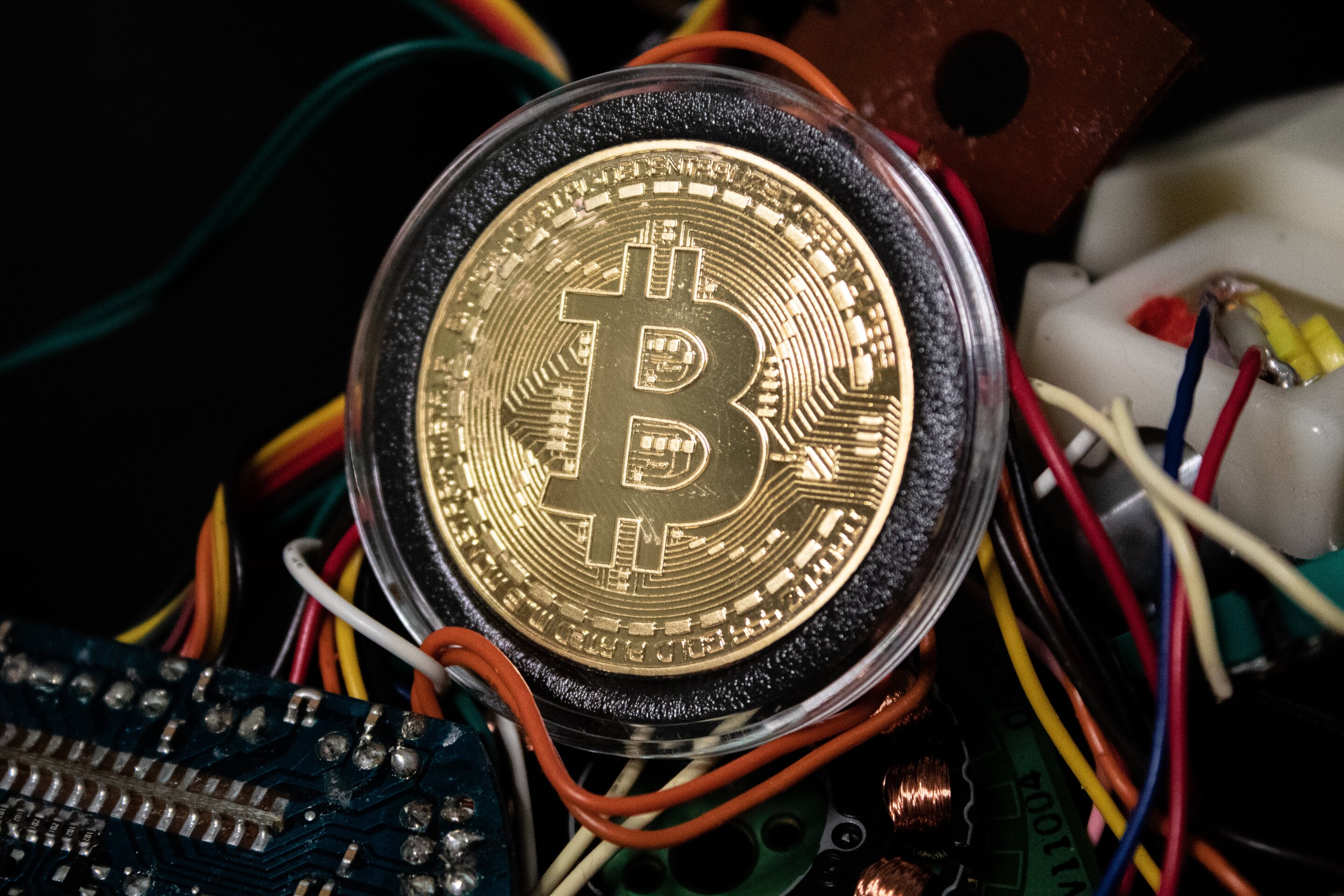 Along a seemingly endless hallway in the Boca Raton Innovation Campus, where IBM developed its personal computer several decades ago, artworks displayed on a half dozen 65-inch commercial monitors rotate every 20 minutes.

But they’re not oils or watercolors. They are unique pieces of digital art—some still images, some digital animations—that occupy Lynn University’s new NFT Museum. NFT stands for non-fungible token, which a collector can buy online. The original exists as a unit of data that the owner keeps on a blockchain—most are on the Ethereum blockchain —a digital ledger that keeps records of art deals in cyberspace.

Each token has a limited number of versions, more like a limited print edition of a piece of art. Theoretically, a digital artwork can be viewed simultaneously at different galleries, schools, stores, or at home.

Amid a burgeoning wave of South Florida consumer and entrepreneurial interest in cryptocurrencies, NFTs and blockchain technology, Lynn University opened its NFT museum in mid-March at the hallowed innovation campus located at 4950 Communications Avenue in Boca Raton. Members of the public can view the rotating creations by students, faculty and artists who donated their pieces to the school.

Cesar Santalo, dean of Lynn’s college of communication and design, devised the project. Though there’s only six screens at the moment, the museum includes simultaneous real-time displays at the American College Dublin in Ireland, and there’s the potential to similarly share art with dozens if not hundreds of other institutions.

“I think that the fact we are in a building as highly trafficked as the BRIC reinforces our mission, not only to spread the word about under-represented artists around the world, but also to get people into the habit of seeing original artwork and being able to purchase it without a middle person,” he said.

“Basically what we’re doing here is we’re controlling all three locations with software we’re running,” he said. “We control what each monitor is displaying and the time intervals of each artwork.”

“A year ago, we didn’t have a museum at the university,” Santalo added. “But now you can view an original in multiple locations simultaneously.”

From Beeple to a growing cast

While it is too early to quantify the degree to which NFTs are catching on among artists and collectors in Broward and Palm Beach counties, cultural promoters, educators, and art observers report a rising interest. Nationally, enthusiasts were tantalized last year when an NFT by the digital artist Mike Winkelmann, a.k.a. Beeple, was sold at Christie’s in New York for a record $69.3 million.

Last December at Art Basel Miami Beach and Miami Art Week, NFTs took center stage. Among the more notable demonstrations, visitors were able to create their own NFTs as the German artist Mario Klinemann, a.k.a. Quasimondo, generated portraits of people who used the blockchain Tezos to mint tokens of their digital art.

At Art Week, an NFT by Los Angels artist Brendan Murphy called “The Future Has Not Yet Been Written,” sold for $1.1 million. The piece was part of his Boonji Project, a collection of 11,111 unique digital NFTs. All of the project’s Boonji Spaceman avatars feature elements from Brendan’s artwork, according to his website.

Last year, according to the annual Art Basel & UBS Global Art Market Report 2022, “the total sales value of art-related NFTs on the Ethereum, Flow and Ronin blockchains increased over a hundredfold to $2.6 billion.”

“The NFT market continues to present a rapidly changing picture, with clear patterns yet to be fully established,” the report said. “In 2020, the primary market accounted for 75% of art-related NFT sales by value, but in 2021 this was inversed, with 73% of value derived from re-sales in the secondary market.”

But there is a persistent risk, the report warned, as unregulated sales platforms are exposed “to fraud, copyright infringement and artificial price inflation. At present, NFTs are hard to reliably appraise, and continue to be subject to the uncertainties inherent in emerging disruptive technology.”

Caveats aside, the local South Florida interest is on the rise. Last October, the Broward Cultural Division hosted a free workshop in downtown Fort Lauderdale that gave around 70 artists and others interested in NFTs the chance to gather information and speak with experts about the growing art and technology space.

“There is a huge appetite for this in Broward,” said County Mayor Michael Udine, an avid advocate of the emergence of cryptocurrency and NFT activity in the county. “It’s not for everybody because there is some risk. But it is really cool and has some important potential.”

Fort Lauderdale attorney and artist Joshua Lida, director of art and business law at the firm Twig Trade and Tribunal, was among the presenters, and sees a wide open opportunity for financially pressed artists to sustain themselves by selling digital work that would gain visibility over time.

“NFTs allow for artists to have continuing income from their work as it gains popularity,” he said “The reality is, artists historically miss out on the largest increases in value of their works over time.”

Artists continue to earn because sales are executed through so-called “smart contracts” that assign ownership and manage NFT transfers between buyers and sellers. When an NFT sells, the contract automatically distributes the funds. When the work passes through the hands of subsequent owners and sellers, the artist receives resale royalties from a portion of any profits earned.

The process is not perfect, Lida says, as there are technical difficulties and “some people try to work around it.”

For artists, digital productions cut through the vagaries of shipping, storage, security, insurance and paperwork associated with all of those business functions.

“We want to reimagine the constructs of a traditional museum’s capabilities and the entire experience utilizing NFT technology,” Santalo said. “This will allow artists to authenticate their work using the blockchain. This digital ledger records transactions that provide proof of scarcity, provenance, and one-of-a-kind status to artists and buyers. We will showcase digitally illustrated and animated works of art as NFTs and film and poetry.”

What about the tactile power of standing in front of an original Jackson Pollock painting or Donald Judd sculpture? Santalo said “one of the things I say is this: a lot of these files, not all of them, are digitally native. so experiencing them in their true environment is to me the closest to the artist’s intentions. So it’s like when Rembrandt created a painting he always thought it was going to be 30 x 40, and you would always see the painting in the museum.”

He said the museum also intends to work with foreign museums that lack the means to showcase digital art. “A decentralized museum is a way to collaborate with artists and curators who may be dealing with political or economic challenges in their own countries,” Santalo said.

“The more we can increase collaboration, diversity of thought, and expression amongst our curators and partners, the more it will drive innovation in our college for our students and faculty alike.”

He said that all of the proceeds of the sale of the NFTs occur directly between the artist and buyer in OpenSea, the world’s largest NFT marketplace.

A retired professional hockey player who finished his career in the New York Islanders organization, he started small nearly a decade ago when he bought two bitcoins for $300 and $350 apiece.

“I let them sit,” he said. “They’re still sitting. It was [with money from] my first actual paycheck playing professional hockey.”

He got into NFTs last year after speaking with friends who are involved, and now owns 52 tokens with artwork attached to them. He acquired most through OpenSea.

“I haven’t lost any money,” he said. “Making money would be nice. I got into it because I see a lot of things going—smart contract gives people ownership [to things] people usually don’t have ownership to. I hope it gets to where you can have experiences where you might not normally have.”

There are lots of items to own besides standard artwork, he noted.

He bought an NFT that gives him access to the animated Stoner Cats production. The tokens serve as lifetime passes that give the owners access to future content.

But the recent slide in the values of cryptocurrencies and NFTs has shaken some people who paid premiums for their NFTs.

Industry publications note that on average, NFT trading volume and prices have taken a precipitous drop since peaking in 2021. Now, with rising interest rates, a wildly fluctuating stock market and plunges in the values of Bitcoin and other cryptocurrencies, the NFT market is going along for the ride.

Morgan Stanley, the securities brokerage, is forecasting an outright crash among NFTs. Many players are finding it difficult to unload tokens purchased for premium prices. One well-reported episode focuses on an NFT of the first tweet by Twitter founder Jack Dorsey. The buyer reportedly paid $2.9 million for it, and hasn’t been able to draw a bid higher than $21,000.

But like the museum, there are commercial players who are undaunted by the choppy waters in the NFT world.

In Miami, Erick Haskell, CEO of Arteza, a seven-year old arts supply retailer, got into the NFT business to help his artist-customers become better known and make money.

“We like to think we are a champion of creators and artists,” he said, “because we are a direct consumer company and all of our customer service is in-house and we have a direct relationship with artists. With the emergence of NFTs and its relationship to art, our ears perked up.”

On June 1, the company launched a “Fuel Your Creativity” campaign to promote the works of seven artists; part of the effort involves the sale of NFTs developed by the artists, who receive all of the sales proceeds. The company is helping four artists with 18 pieces up for sale during a four-week auction.

Haskell, though, feels the greatest interest in the art world will come from art enthusiasts as opposed to those who seek to make a financial killing. And, he notes, the values of NFTs and the values of cryptocurrencies are “not directly” tied to each other.

“Our followers are not NFT investors, they’re professional artists or hobbyists,” he said. “I think it’s like any time you see froth in the market, ultimately supply and demand evens out. I trust this market will be the same as any other.”

“I think all of that is working out,” he added. “I think there is a permanent future for NFTs.”

Denial of responsibility! NewsUpdate is an automatic aggregator around the global media. All the content are available free on Internet. We have just arranged it in one platform for educational purpose only. In each content, the hyperlink to the primary source is specified. All trademarks belong to their rightful owners, all materials to their authors. If you are the owner of the content and do not want us to publish your materials on our website, please contact us by email – [email protected]. The content will be deleted within 24 hours.
artistsbest technology newsCashChoppyMuseumnews update technewsupdateNFT

Want To Make Your Own Games? Check Out This Steeply Discounted Bundle

How Destiny 2 Unexpectedly Became A Game About Dealing With Trauma