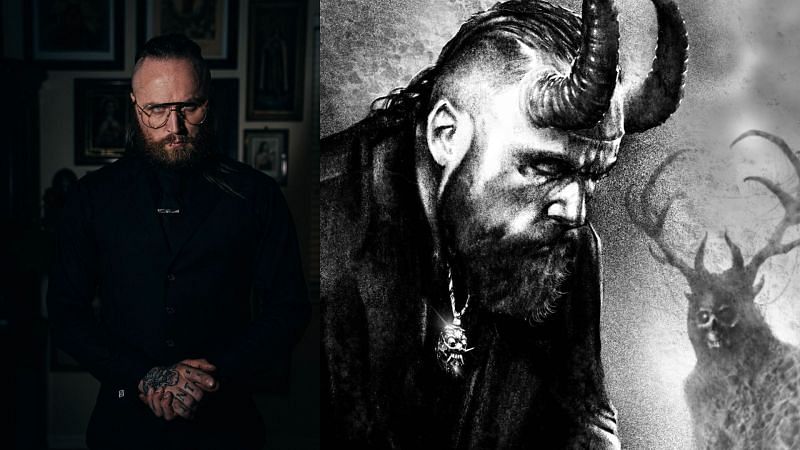 Aleister Black’s WWE release, alongside several other major stars, has been the biggest point of discussion among the pro wrestling community since yesterday. His dark and satanic character has always intrigued fans and now the man himself has revealed some interesting details about the same.

On the Twitch stream following his WWE release, Aleister Black mentioned that his character was basically “the devil with memory loss”. He also spoke about his demonic appearance and fleshy-looking kick pads.

“The one thing you have to understand about Aleister, Aleister Black was basically the devil with memory loss. He knew that, you know, he had done something wrong and he felt that he needed to pay for it. And, I always thought it was an interesting concept, like what if, you know, when Lucifer fell to Earth, what if he woke up like ‘how did I get here’, that was kind of the idea behind Aleister Black. I used a lot of layers in that, you know, so the more angry Aleister became the more he looked like, you know, parts of him were made out of like a demon flesh. That’s why the kick pad was like fleshy-looking,” said Aleister Black.

Guys i’m not mad, at all. Let’s have a talk about it. Share some stories with me! Come hang out on Twitch. https://t.co/kf6a87a5tw

Aleister Black discusses the intriguing look of his new character

After being away from WWE TV for nearly seven months, Aleister Black returned with a new character on SmackDown after WrestleMania 37. With a new look and some amazing cryptic promos, he immediately caught the attention of the fans.

The WWE Universe was also quick to notice how he was wearing a lens on his right eye, continuing on the previous storyline where Seth Rollins and Murphy drove his eye through a steel step.

“The eye thing was actually my call. I felt that it would be good for me to continue with the eye because, you know, my eye got taken out, my eye was black, and then when I came back I was like I don’t just wanna play it off. Plus, the more research I did on like cult leaders in pop culture and stuff like that, they always had a weird aesthetic trait which was like, they had really white hair or they had light eyes or stuff like that. So I wanted to kind of take that with me in the character coz it was a good reference and I think the glasses made it complete. The funny thing is those are actually my glasses, I have driving glasses nowadays. So that’s kinda how that came to be. I thought the glasses was just a nice touch,” said Aleister Black.

Be sure to check out the following video where Sportskeeda Wrestling’s Kevin Kellam and Rick Ucchino discuss the shocking recent releases from WWE of Aleister Black, Braun Strowman, Lana, Ruby Riott, Murphy, and Santana Garrett.

Please credit Thea Trinidad’s Twitch Stream and give a H/T to Sportskeeda Wrestling for the transcription if you use quotes from this article.

Denial of responsibility! NewsUpdate is an automatic aggregator around the global media. All the content are available free on Internet. We have just arranged it in one platform for educational purpose only. In each content, the hyperlink to the primary source is specified. All trademarks belong to their rightful owners, all materials to their authors. If you are the owner of the content and do not want us to publish your materials on our website, please contact us by email – [email protected]. The content will be deleted within 24 hours.
AleisterAleister Blackbest sports newsBlackCharacterdetailsDevilinteresting

Tokyo Olympics: Every requirement of athletes must be fulfilled, be it vaccination or training, says PM Narendra Modi | Tokyo Olympics News – Times of India

PlayStation Creator Ken Kutaragi Isn’t A Fan Of The…

Dodgers GM Brandon Gomes found his calling during his many…

Nishant Sandhu: We had to keep Covid-19 cases in the camp…