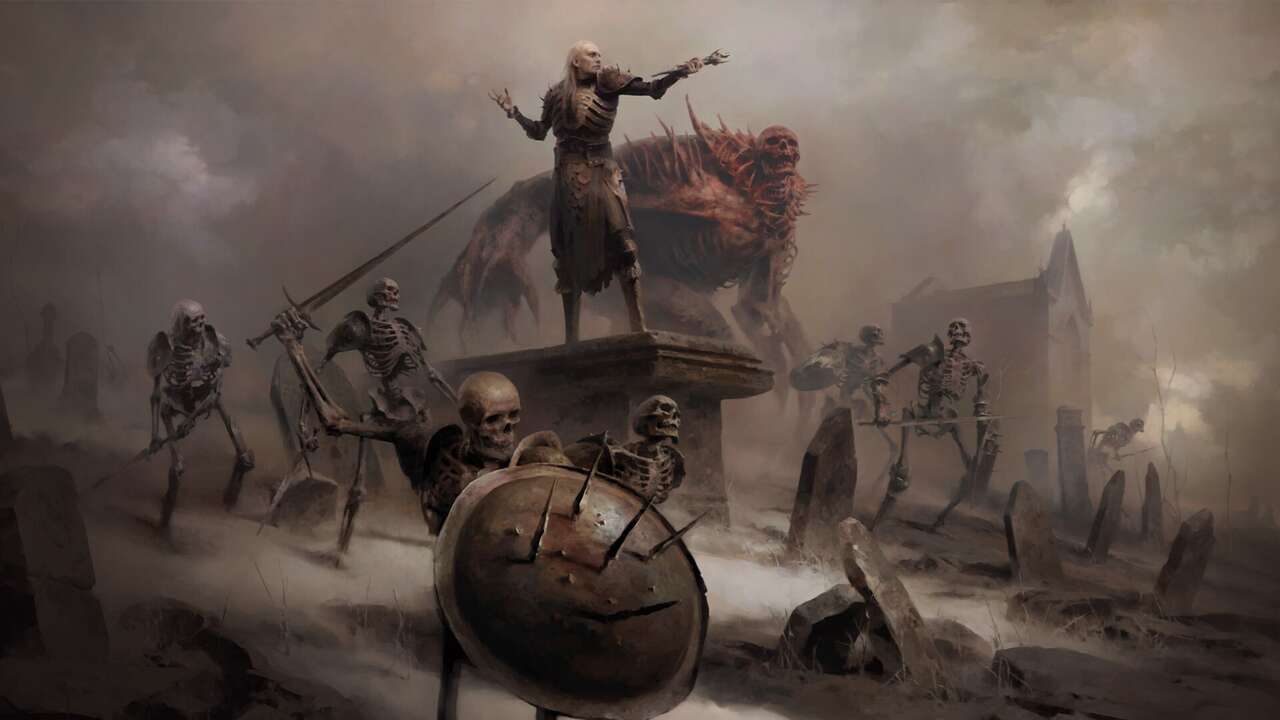 Diablo 4 Update Dives Deep On The Necromancer, Including Its Unique Book Of The Dead Mechanic

After a splashy debut as part of the Xbox and Bethesda Showcase, more information about Diablo IV’s Necromancer class has been revealed, including a new unique class mechanic called Book of the Dead which will give players even more control over their undead minions.

As explained by Diablo IV lead class designer Adam Jackson in a new Blizzard blog post, the Book of the Dead is a feature unique to the Necromancer and is available from the very start of the game. Summons like Skeletal Warriors, Skeletal Mages, and Golems can all be customized, with each type of minion sporting three specializations to choose from. The blog uses Skeletal Warriors as an example: They can have increased attack power or reduced health under the Skirmisher specialization, more health under the Defender specialization, or focus on slower, AOE attacks as the Reaper specialization. Each type of undead minion also has unique upgrades, allowing them to be further tailored for specific playstyles.

For players who don’t mind sacrificing their skeletal friends for more power, the Book of the Dead allows that too. Each type of minion can be sacrificed for personal buffs, with players able to mix and match which minions or buffs they may want to bring into battle.

As for how the Necromancer themselves play, they gain a resource called Essence from using basic attacks which can then be used to cast certain spells. Necromancers also utilize corpses from slain enemies to use signature abilities like Corpse Explosion, and players will have means to generate corpses all their own as well. Necromancers will be able to use swords, daggers, wands, focuses, and shields, and are the only class in the game able to use scythes.

There are a number of different playstyles for Necromancer players to choose from, many of which will be familiar to players of previous Diablo games. Blizzard states that the team spent “a considerable amount of time” ensuring that fans of previous versions of the Necromancer from Diablo II, Diablo III, and the newly released Diablo Immortal would find something familiar in the new version of the class.

Playing as a Bone-focused Necromancer means putting an emphasis on attacks that benefit heavily from critical strike and using Essence, with abilities like Bone Spirit and Bone Prison making their return. Darkness Necromancers will use spells to debuff and control enemies while inflicting damage-over-time effects. Necromancers who want to play more defensively may find themselves focusing on Blood spells, which can siphon life from enemies and turn it into power, like with the Blood Mist skill, which makes the Necromancer temporarily immune to damage while draining the life force of nearby enemies. Last but not least is the Army playstyle, which is all about summoning the undead to dish out death and destruction. Jackson states that Necromancers who want the maximum number of minions will only need to dedicate two buttons on their skill bar to summoning the undead, “leaving room for player expression in what additional skills they want to put on their bar.”

For more information about the Necromancer and how Diablo IV is shaping up, be sure to check out this interview with game director Joe Shely and Diablo franchise general manager Rod Fergusson.

A recent job listing for Diablo IV confirmed the game will have an in-game shop. Fergusson later confirmed that the plan is to sell optional cosmetics and expansions for Diablo IV, but the in-game shop will not include any way to purchase player power. Diablo IV is now slated to arrive in 2023, and will feature cross-play and cross-progression across consoles and PC. Diablo IV lost its previous game director following allegations revolving around various lawsuits and investigations related to an alleged “frat boy” workplace culture at Activision Blizzard, which is currently in the process of being acquired by Microsoft in a $69 billion deal.

Denial of responsibility! NewsUpdate is an automatic aggregator around the global media. All the content are available free on Internet. We have just arranged it in one platform for educational purpose only. In each content, the hyperlink to the primary source is specified. All trademarks belong to their rightful owners, all materials to their authors. If you are the owner of the content and do not want us to publish your materials on our website, please contact us by email – [email protected]. The content will be deleted within 24 hours.
best games newsbookDeaddeepDiablodivesgame updategames news

apple: Apple may launch its AR glasses in the second half of 2024 – Times of India