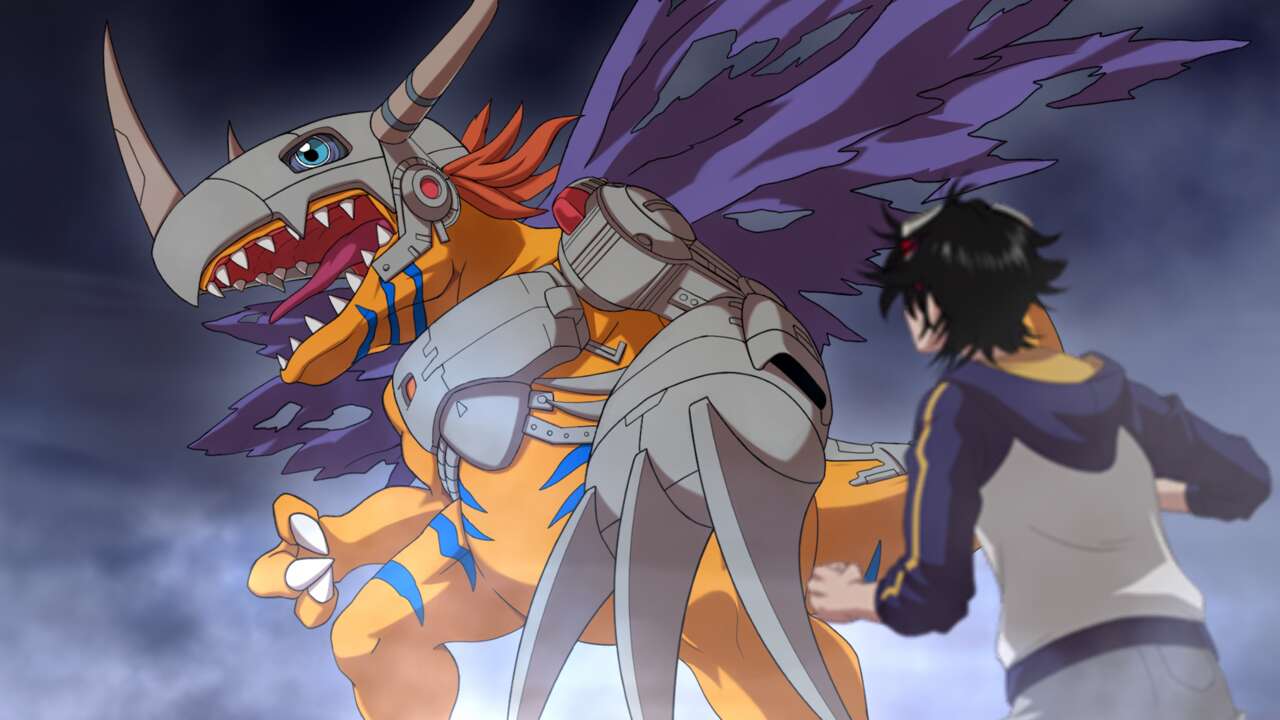 Digimon has never been shy to delve into storylines and topics that society too often wishes to ignore–the first episode of the 1999 anime literally begins with the main character monologuing about climate change and how it’s destroying the planet. Most of the stories in the series explore these topics within the scope of being trapped within a fantasy world inhabited by cute monsters. It’s here where the characters must come to terms with the irresponsibility of finding solace in the black-and-white morality of their new reality–an alluring alternative to the nuanced wants and needs of the real world. Pushing on this notion a bit further to dip its toes into the horrifying realities of physical and verbal abuse, terminal illness, psychotic breaks, and weaponizing relationships, Digimon Survive tells one of the darkest tales that the franchise has ever covered. All told, it amounts to a deeply compelling visual novel that’s driven by likable characters and an intriguing mystery but that aspect of it is too often interrupted by boring tactical combat.

In Digimon Survive, you play as middle-schooler Takuma, who is attending a camp over spring break alongside friends Minoru and Aoi and acquaintances Saki, Ryo, and Shuuji. Upon learning that the camp is close to a temple famous for its legend about a festival in which human children were sacrificed to beast gods, the six investigate, and they’re soon joined by local brother and sister duo Kaito and Mio. The misadventure ultimately results in the kids becoming lost in a world inhabited by the so-called beast gods known as Digimon.

It’s a familiar setup for a Digimon story (or any isekai story, really), and Digimon Survive spends way too long laying the groundwork with meandering dialogue and unnecessary character backstory. The game dangles the foreshadowing that these kids are about to be trapped in another world, but then spends hours getting there, and then leaves the group confused as to what’s happened to them for a while after. It’s frustrating to see three separate people theorizing that maybe the group is now no longer on Earth when you as the player arrived at that conclusion hours prior and just want the actual adventure to kick off.

But once that adventure does begin, it really gets going. There’s an unsettling sensation that hangs over the ongoing dynamics of the teenage heroes in their quest to find a way home, which evolves depending on how the characters react to one another. You guide Takuma through conversations with his peers, developing into a leader that the group looks up to and aspires to emulate. Your dialogue choices can influence Takuma’s karma to lean more towards morality, wrath, or harmony and also have an impact on his standing with the others in the group.

The effects of these choices slink into the background, only coming to the forefront during climactic moments in the story, oftentimes informing who has Takuma’s back in high-stakes situations. They also affect who ultimately makes it to the end of Digimon Survive, as your choices may inspire some to give their lives for the betterment of the group or condemn others to fall so far into despair that the only way out for them is death. Some characters can only be saved if another character is alive and thus around to help them through whatever they’re dealing with, so losing certain characters will doom others down the line. It’s a daunting web of possibilities and consequences, some of which can have a substantial impact on the final outcome of Digimon Survive–there’s some decent replay value here for those who are interested.

The fear of death looms over Digimon Survive, and the mounting sense of dread that one mistake could potentially cascade into a character’s demise several chapters later leaves an eerie feeling over even the most mundane of interactions throughout the campaign. It adds a nerve-wracking but narratively compelling weight to your role as the leader–your choices matter here, not just in terms of whether you beat the bad guys, but whether each of the good guys can overcome their own personal demons.

Though there are moments of light-hearted humor and slice-of-life shenanigans, Digimon Survive’s story is dark–it never shies away from depicting some truly horrific acts, like a person being literally eaten alive by the physical embodiment of their emotional trauma. The game never lets up on the notion that real-world issues can’t be fixed or put on hold just because you’re now stuck in a fantasy. Wilfully ignoring physical abuse will not suddenly make it magically go away, nor will a breaking psyche suddenly rectify itself if you allow it to escape into a happy delusion.

Your failures will oftentimes be met with stellar work from the game’s voice actors, sound design team, and composer Tomoki Miyoshi, as chilling screams ring out against creepy piano melodies accompanied by the soft crunching of bones or slow evisceration of flesh. The eyes of each character are designed to be especially expressive as well–it really sells the horror of the situation when you’re trying to talk some sense into your friend and suddenly their eyes widen with feverish hysteria, teasing that you may already be too late.

The creepy tone helps sell the unsettling mystery at the core of Digimon Survive. The cast of characters is striving to uncover the truth about this fantasy world and its history of human sacrifices, the nature of the Digimon themselves, and the identity of a strange adult man known only as “Professor” and how he may connect with two ghost-like children. There’s a lot here, with plenty of surprising twists that deliver on satisfying turns over the course of a 30+ hour campaign. Even when you can correctly guess what’s about to happen, the journey to that reveal is written well enough to be an enjoyable ride.

It’s a great story, too often interrupted by dull combat encounters. A few hours into Digimon Survive, each human character befriends a Digimon partner who aids them in battle. Every fight plays out on a grid, with each Digimon in play taking turns to move, attack, defend, or use an item. Digimon Survive reduces the wonderful complexity seen in so many good examples of tactical combat to a tedious level of simplicity. Each Digimon only has two attacks, and though there is a system of type advantages, it’s so unimportant that you can outright ignore it and still land an easy win. Nothing about it encourages you to fight with any semblance of strategy, you simply send out your strongest fighters to mop the floor with your opponents. After just a few fights, combat becomes a repetitive slog. Digimon Survive does feature difficulty options, but even after cranking up the difficulty, combat is too simple to be challenging–battles will only, unfortunately, last longer given enemies’ larger health pools.

The weakness of the combat drags down Digimon Survive’s exploration element as well. At certain points in the story, Takuma will have limited time to explore an environment, giving him a small window to talk with allies, look for items, or battle wild Digimon. Though talking with allies will oftentimes allow you to glean additional insight into your friends’ troubling pasts and ongoing traumas, the other two activities feel superfluous in the face of straightforward and easy combat. The act of scanning the environment with your phone feels pointless, given the reward are items you’ll never need in battle, and you don’t have to grind for levels to increase the strength of your weaker Digimon if you’re already using the same ones over and over and overpowering your party.

Admittedly, battling wild Digimon is an important step for growing your team if that’s your aim. While in battle with wild Digimon, you can pause combat to converse with your foe. Answering their questions in a way they find satisfactory will open up the possibility of having them join your side, and you’ll likely then have to face more wild Digimon to level your new teammate to a point where they become useful. However, the Digimon you recruit rarely, if ever, prove to be stronger than each human’s original Digimon partner. I’d try to befriend a Digimon whenever I saw one that I had nostalgia for, but only ever used them once or twice in battle. The eight Digimon that you more or less start the game with are more than capable of carrying you to the end.

If anything, wild Digimon seem to be weaker stand-ins for anyone who finds themselves with a heavy mortality rate by the end of the game, as a Digimon dies when their human partner does, and so losing a number of your friends can cut your fighting force down by quite a bit. I might have relied on recruiting Digimon more often had I needed to, but I only saw two of my friends brutally killed in front of me on account of my poor leadership.

Takuma and his friends’ emotions influence how their Digimon partners evolve over time (a process called digivolution), creating what could have been a symbiotic connection between the visual novel side of Digimon Survive and the tactical combat. However, the connection only serves the story in how it keys you into each human character’s subconscious desires. Seeing Takuma’s adorable, dinosaur-like Agumon achieve the strength to digivolve into his Mega evolution can lead to different results–a Takuma driven by his moral responsibility to support the group will see Agumon become the dinosaur knight Wargreymon, for example, while a Takuma who only cares about his own survival will witness Agumon transform into the power-hungry cyborg Machinedramon. This insight is reflected across the cast, with each Digimon evolving to mirror their human partner’s desires. But in terms of gameplay, it matters little. The names and animations of the attacks that Agumon’s evolutions can use may change form to form, but their function–that of an all-rounder heavy-hitter–doesn’t vary in any meaningful way based on Takuma’s choices.

Digimon Survive is a misshapen DNA digivolution. Most of the game is this great visual novel, which starts slow but eventually tackles some intriguing themes that are interwoven into one of the most mature Digimon stories ever told. Sometimes the characters can be a little one-note, but each manages to carry aspects of the story in compelling ways, and I wanted to keep pushing through Digimon Survive to unravel each person’s history and ultimately learn why and how they had been transported to another world. But, at the same time, Digimon Survive is regularly dragged down by tedious tactical combat, and it negatively affects other sections of the game too, like exploration and Digimon evolutions. It’s not enough to ruin an otherwise great visual novel, but it does put quite a damper on the whole experience.

Denial of responsibility! NewsUpdate is an automatic aggregator around the global media. All the content are available free on Internet. We have just arranged it in one platform for educational purpose only. In each content, the hyperlink to the primary source is specified. All trademarks belong to their rightful owners, all materials to their authors. If you are the owner of the content and do not want us to publish your materials on our website, please contact us by email – [email protected]. The content will be deleted within 24 hours.
best games newsDevolutionDigimondigitalgame updategames newsnews update gamesnewsupdate