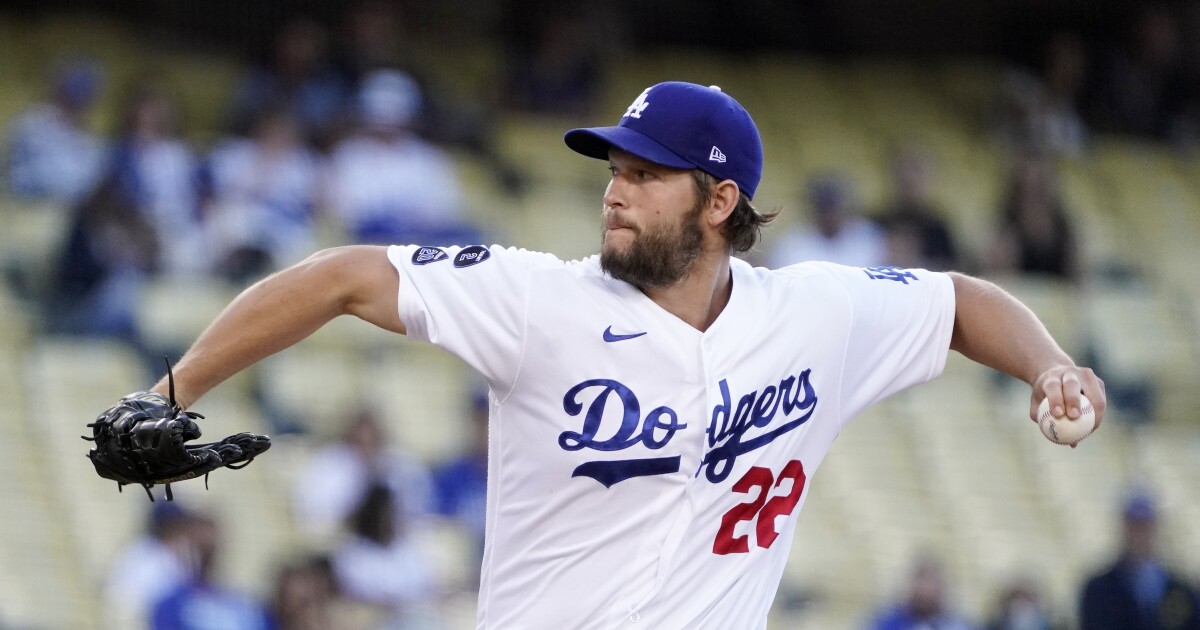 On a night of all-you-can-eat offense, Clayton Kershaw produced two singles and an RBI on Friday for the Dodgers.

He pitched pretty well too, giving up just three hits and an unearned run in a 12-1 Dodgers victory over the Texas Rangers.

The game didn’t feel even that close as the home team pounded Rangers pitching from the start. The Dodgers established a season high with five home runs — by the end of the fourth inning.

“Much needed,” manager Dave Roberts said. “It certainly helps the starter. It helps the bullpen.”

Highlights from the Dodgers’ 12-1 victory over the Texas Rangers on Friday night.

But as one-sided as the score was, not all the developments were great for the Dodgers.

Muncy was removed before the top of the second for what the team said was right-side tightness.

The Dodgers also lost Cody Bellinger for the night in the fifth after he reached on an RBI single. It was announced that he had tightness in his left hamstring.

“I’m really hesitant to not say ‘oblique,’ but that’s kind of where it was at,” Roberts said in reference to Muncy. “So we’ll see. Got ahead of it early, in our opinion, in Max’s opinion. Tomorrow will be more telling.”

He said Bellinger first felt his hamstring tighten while taking a pitch and not while running.

“That’s part of it,” Roberts said of the injuries. “Right now, I’m going to kind of hold out hope that it’ll be short term, if any loss of time for both guys.”

Austin Barnes, who had caught each of Kershaw’s first 13 starts, was held out as he works his way back from an ankle injury. Barnes started Thursday in Pittsburgh and is expected to be back in the lineup Sunday.

Kershaw retired the first six Rangers hitters and then pitched around a Culberson double leading off the third by striking out three in a row.

He topped himself in the fourth by striking out four in an inning, tying a franchise record. The second of those strikeouts failed to be an actual out when Adolis Garcia reached base on a wild pitch.

Still, by the end of the fourth, Kershaw had struck out seven in a row and eight overall. His streak ended at seven when Nate Lowe opened the fifth by grounding out to second.

Kershaw (8-5) kept Texas scoreless until the sixth, when the Rangers scored on a force out.

As for his offense, Kershaw’s effort continued an impressive hitting run for Dodgers pitchers.

“It’s part of the game,” he said. “Guys know that when you come here we’re going to work at it, we’re going to swing the bats and get our bunts down. Also, we’re trying to savor it a little bit because it’s most likely our last time to do it.”

The Dodgers set the mood early on offense behind 1,239 feet of home runs in the opening inning. Muncy, Turner and Lux each homered off Rangers starter Mike Foltynewicz to open a 6-0 lead.

Muncy also drove in Mookie Betts, who had reached on an error, with his 428-foot shot on Foltynewicz’s seventh pitch. Just two pitches later, Turner produced a 395-foot solo homer.

After Bellinger walked and Chris Taylor singled, Lux sent a Foltynewicz curveball 416 feet over the wall in center.

Lux began Friday with no RBIs for the month. When he added a run-scoring double in the third, he had four RBIs for the night.

The Dodgers’ attack also included a solo homer by Pujols, No. 672 for his career.

Roberts said he wanted to give Barnes consecutive days off from starting as he continues to heal.

Roberts also said Smith catching Kershaw is beneficial for everybody moving forward because the familiarity can only help over the course of a 162-game season.

“Will’s great,” Kershaw said. “I have no problem throwing to Will. Did a great job tonight.”

Denial of responsibility! NewsUpdate is an automatic aggregator around the global media. All the content are available free on Internet. We have just arranged it in one platform for educational purpose only. In each content, the hyperlink to the primary source is specified. All trademarks belong to their rightful owners, all materials to their authors. If you are the owner of the content and do not want us to publish your materials on our website, please contact us by email – [email protected]. The content will be deleted within 24 hours.
Loading...
best sports newsClaytonDodgershomeKershawsnews update sportsnewsupdatePitching

Can Machine Learning Help In Understanding What Sperm Whales Say?