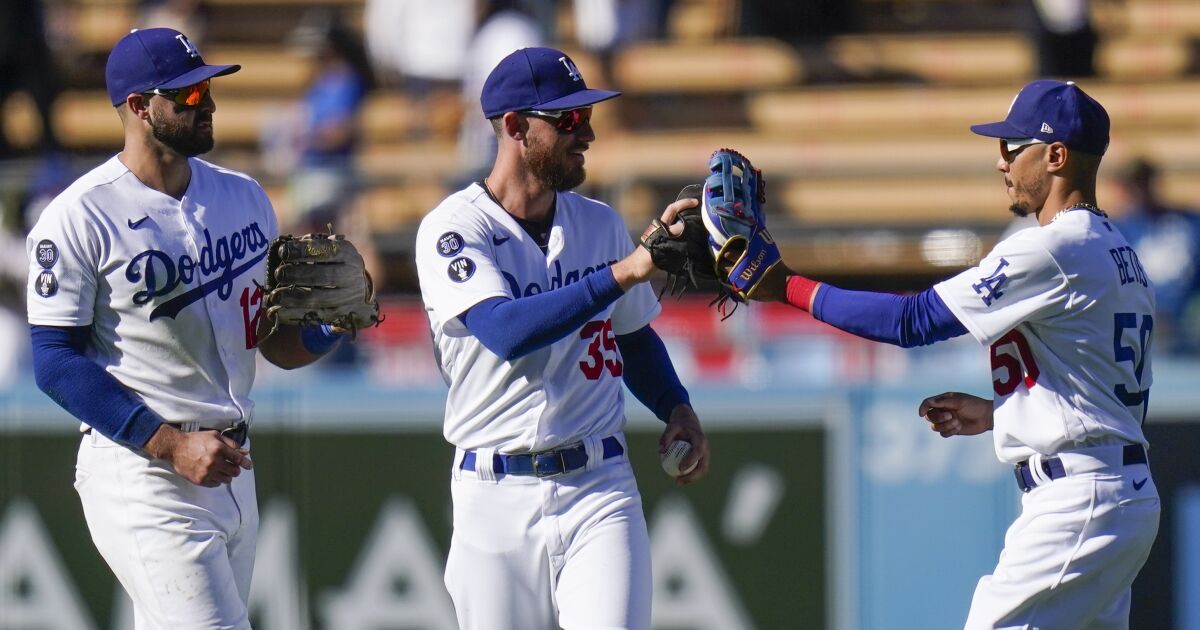 It’s still unclear what the Dodgers roster will look like in October, and which pitchers they’ll be able to rely upon.

But what they now know for sure, after a 4-1 win over the St. Louis Cardinals on Sunday, is that they will possess the National League’s top seed after a regular season that’s on the verge of being the best in franchise history.

By winning a weekend-series rubber match over the Cardinals, the Dodgers matched the club’s wins record, as well as clinched the best record in NL, by improving to 106-47.

They became the first team in MLB history to win 106 games in three consecutive full-length seasons, having also reached that mark in 2019 and 2021 (the 2020 season was shortened to 60 games because of the pandemic).

And they still have nine more games to establish a new high mark for wins in franchise history.

“It speaks to the level of consistency, excellence,” manager Dave Roberts said. “We put ourselves in a really good spot. Part of getting to where we want to get to is, you got to dominate and play well during the regular season. And we’ve been as consistent as anyone.”

Sunday was no exception.

Though Roberts’ pregame scrum centered on all the pitchers the Dodgers are missing — he fielded questions about the uncertain status of Dustin May (back), Tony Gonsolin (forearm) and Blake Treinen (shoulder), while also reiterating that Yency Almonte (elbow) is on track to be activated Wednesday — the victory that followed was keyed by composure on the mound.

Despite being sick the past couple of days, rookie Michael Grove earned his first MLB win in a five-inning, one-run start.

After reliever Brusdar Graterol escaped a jam in the sixth with a double play, another recent minor league call-up, Andre Jackson, earned his second career save by closing the game with three scoreless innings.

And in between, the lineup provided more than enough support, scoring four quick runs in the first three innings to knock Cardinals veteran starter Adam Wainwright out of the game early.

“The pitchers set the tone,” Roberts said. “And I thought the team offense was back.”

As owners of baseball’s best record, the Dodgers had known they were closing in on the franchise’s win record and the NL’s top playoff seed.

It wasn’t until after Sunday’s game, though, that most of the Dodgers realized they’d tied the former and officially clinched the latter.

“I didn’t even know,” said Freddie Freeman, who returned Sunday from a two-day absence because of an illness and opened the scoring with a first-inning double.

The first baseman is aware of what it means, though.

When he was with the Atlanta Braves, Freeman played in 11 postseason games at Dodger Stadium. He said the fans’ reaction to the home run by the Dodgers’ Juan Uribe in Game 4 of the 2013 NLDS is the loudest he’s ever heard.

“This place can get deafening,” he said. “So to have home-field advantage all the way through the NLCS is a big deal.”

It’s also another reminder of how much different the Dodgers’ path through the playoffs will be this season, after they had to settle for a wild-card berth in 2021.

“We missed out on it last year, and that probably wore us down a little bit,” said catcher Will Smith, who had two hits and an RBI on Sunday. “It’ll be nice this year to have home-field advantage and know that going into it.”

As for all the other historic marks the Dodgers can set during the final weeks of the regular season?

“We’ll have plenty of time to look back on our accomplishments,” Roberts said.

It’s the 11 postseason wins standing between them and a World Series championship they’re more worried about for now.

Almonte faced four batters in what the Dodgers hope will be his final rehabilitation outing with triple-A Oklahoma City. The right-hander got only two outs while being charged with two runs. More importantly, however, will be if he feels good in the ensuing days, which would enable him to return to the big league roster this week after missing almost two months because of an elbow injury.

Gonsolin is still on track to make a rehab start with Oklahoma City on Tuesday. Roberts said if Gonsolin continues progressing well, he could get his workload built up to four innings by the start of the playoffs.

Roberts didn’t offer any more clarity on the specifics of May’s back injury. “To be quite honest, I haven’t dug in on it,” Roberts said. “He’s not gonna be playing catch for a few days. So I’m gonna let the trainers deal with that and get him right.” May declined to talk to reporters in the clubhouse pregame.

Denial of responsibility! NewsUpdate is an automatic aggregator around the global media. All the content are available free on Internet. We have just arranged it in one platform for educational purpose only. In each content, the hyperlink to the primary source is specified. All trademarks belong to their rightful owners, all materials to their authors. If you are the owner of the content and do not want us to publish your materials on our website, please contact us by email – [email protected]. The content will be deleted within 24 hours.
best sports newsclinchDodgersfranchisemarknews update sportsnewsupdateNLs

Airtel 5G Plus service now available in 4 cities of Kerala…