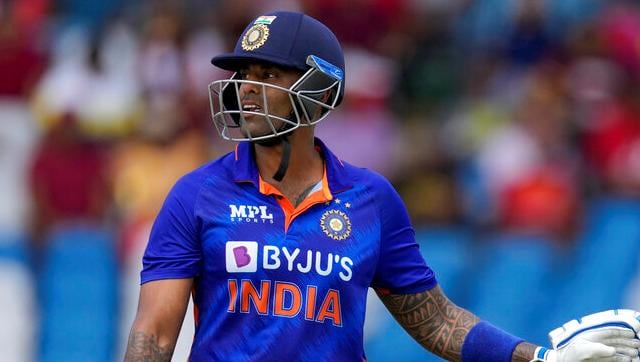 During the first match, former Indian cricketer Mohammed Kaif too was left bemused when he saw Surya walk out to open the innings.

The mantra of the Indian team is pretty clear for the T20 series against West Indies. Captain Rohit Sharma wants to experiment with the players at his disposal, try them out at different situations and test their mettle. India have opened with Suryakumar Yadav in both the matches so far and this decision has not gone down too well with few former cricketers.

Suryakumar has partnered Rohit at the top of the order in both the games so far. While he smashed three boundaries and a six to race to 24 off 16 deliveries in the first match, he could only manage a breezy 11 off 6 deliveries in the second game.

Speaking to FanCode before the match in St Kitts, former India selector Kris Srikkanth was quite vocal in expressing his displeasure with this decision. He said since Suryakumar is a certainty in India’s playing XI for the T20 World Cup, playing him in an unfamiliar position could well be detrimental to his form and confidence.

“Suryakumar Yadav is a brilliant player at No.4. He should be batting at No.4 in the T20 World Cup. So why do you want to make him open. If you want someone to open, drop Shreyas Iyer and pick Ishan Kishan instead,” Srikkanth said.

“What I am trying to say is simple…don’t spoil the cricketer like Suryakumar Yadav. Please don’t do that. I will tell you what will, after a couple of failures he will lose his confidence. Cricket is a confidence game,” he went on to add.

During the first match, former Indian cricketer Mohammed Kaif too was left bemused when he saw Surya walk out to open the innings. Rishabh Pant was given the chance to open in the T20I series in England, but the team management looked towards the right-hander for this series.

“Whatever it was, I completely failed to understand it. You ought to have used Rishabh Pant today if you were planning to use him as the opener for a couple of games,” Kaif said ahead of the match to FanCode.

Denial of responsibility! NewsUpdate is an automatic aggregator around the global media. All the content are available free on Internet. We have just arranged it in one platform for educational purpose only. In each content, the hyperlink to the primary source is specified. All trademarks belong to their rightful owners, all materials to their authors. If you are the owner of the content and do not want us to publish your materials on our website, please contact us by email – [email protected]. The content will be deleted within 24 hours.
best sports newschiefCricketerdontFirstcricketFirstpostIndiamanagement