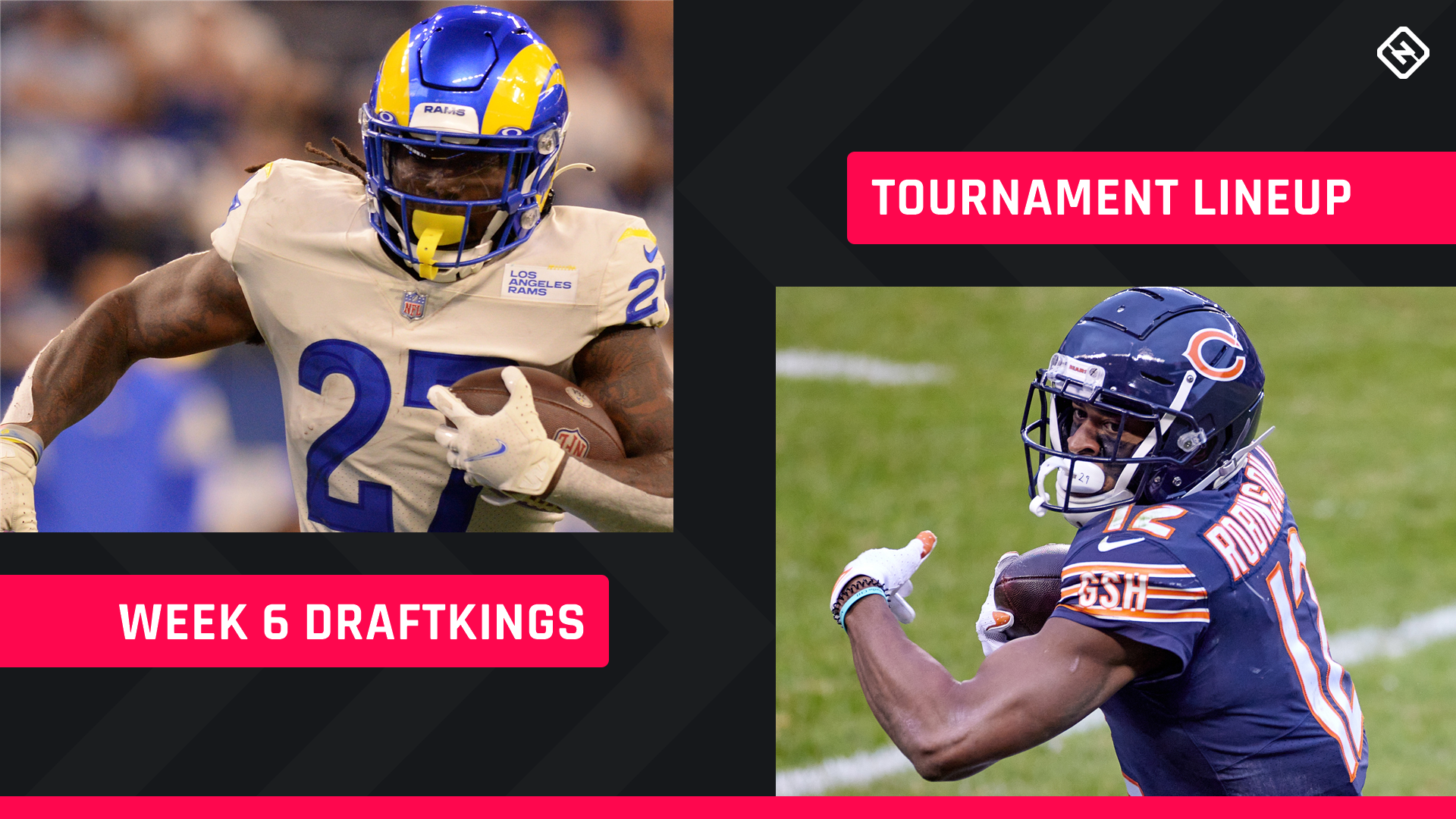 Not only is Week 6 coming on the heels of another string of brutal injuries, but it also marks the beginning of navigating bye weeks (Falcons, Saints, Jets, 49ers). As if that didn’t make our task challenging enough this week, there is another London game to take two more teams (Jaguars and Dolphins) off of the main DFS slate. As such, there are fewer potential picks in the player pool for our Week 6 DraftKings tournament lineup, but we’re banking on some bounce-back receivers and high-volume running backs.

Before we get into our lineup, here are the most notable scoring rules for DraftKings contests: Full-point PPR, four-point passing TDs, three-point bonuses for 100 rushing yards, 100 receiving yards, and 300 passing yards.

QB Sam Darnold, Panthers vs. Vikings ($6,100). We know that nobody wants to start Darnold in any lineup, especially after last week’s clunker, but we’ve seen him flirt with — and surpass — the 30-point plateau on DraftKings. The presumptive return of Christian McCaffrey will help Darnold — and the entire offense — get back on track against the visiting Vikings.

RB D’Andre Swift, Lions vs. Bengals ($6,300). Let’s cross our fingers that Swift’s yo-yo act ends this week and he just continues to play at a high level. While Swift continues to share the rushing load with Jamaal Williams, he has separated himself from his backfield mate thanks to a team-leading 35 targets. In a matchup that figures to be within reach for the Lions, Swift should be leaned upon heavily once again.

RB Darrell Henderson, Rams @ Giants ($6,000). We know Sean McVay wants to play it somewhat safe with the injury prone Henderson, but it appears as if he’ll continue to get solid workloads as long as he’s healthy. He’s averaged 17.5 touches/game and has received five or more targets in two of them.

WR Ja’Marr Chase, Bengals @ Lions ($6,700). The “Ja’Marr Chase Show” is only getting started. He’s overtaken the team lead in targets (35) and paces the Bengals with five touchdowns. The Lions haven’t shown that they have any teeth defensively, perhaps setting Chase up for another monster outing.

WR Brandin Cooks, Texans @ Colts ($5,800). It’s not a shock that Cooks has struggled against the Bills and Patriots in consecutive weeks. The good news is rookie quarterback Davis Mills showed signs of life in Week 5, suggesting he’ll be able to support Cooks moving forward. Cooks was hoarding targets prior to the two-week speed bump, and this could very well be the week he garners another 10-plus looks.

WR Allen Robinson, Bears vs. Packers ($5,300). It’s been a nightmarish start for those invested in Robinson stock. He received 11 targets in Week 1 in what looked like it was just a subpar performance by the Bears overall, but he’s received just 18 targets over the subsequent four games. The Bears opened as four-point underdogs, so quarterback Justin Fields might not have a choice but to look Robinson’s way quite a bit on Sunday. It’s also worth noting that Robinson will not have to contend with Pro Bowl cornerback Jaire Alexander, who’s out with a shoulder injury.

TE Mark Andrews, Ravens vs. Chargers ($5,200). Andrews had everything going for him but the touchdowns heading into Monday night, and after reeling in a pair, he’s likely to be a popular play this week. So be it. He’s the team’s co-leader in targets (38), leader in receptions (29), and is heading into what should be another competitive matchup that forces the Ravens to employ a balanced attack.

FLEX Josh Jacobs, Raiders @ Broncos ($5,900). Head coach Jon Gruden’s resignation throws the Raiders, specifically their offense, into flux. We like Jacobs nonetheless. His lack of efficiency up to this point has been frustrating, but his five targets in consecutive weeks provides encouragement that he’s on his way to becoming a bigger part of the passing game.

DEF Arizona Cardinals @ Browns ($2,700). The Cardinals are the fourth-best defense in the league per DVOA and have limited opponents to 19 points per game. More important, they’ve forced 10 turnovers (tied for third most) and done a decent job of getting after quarterbacks (12 sacks).

Denial of responsibility! NewsUpdate is an automatic aggregator around the global media. All the content are available free on Internet. We have just arranged it in one platform for educational purpose only. In each content, the hyperlink to the primary source is specified. All trademarks belong to their rightful owners, all materials to their authors. If you are the owner of the content and do not want us to publish your materials on our website, please contact us by email – [email protected]. The content will be deleted within 24 hours.
advicebest sports newsdailyDFSDraftKingsfantasyFootballGPP

Fan unrest as Hungary draw at England; Poland walk off