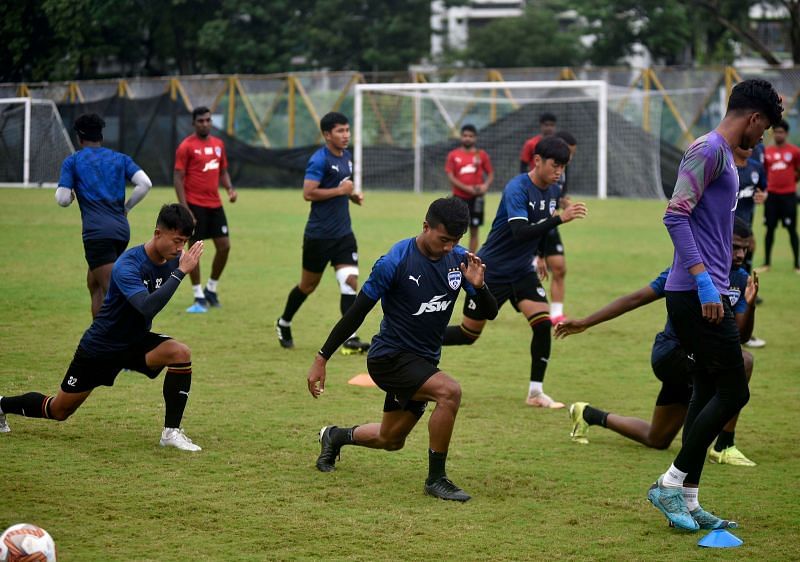 The Durand Cup will witness an Indian Super League clash on Wednesday. Bengaluru FC and Kerala Blasters lock horns in a Group C match at the Vivekananda Yuba Bharati Krirangan (VYBK) in Kolkata.

Bengaluru FC will be looking to do better than their previous performance at the Durand Cup, when they could not make it past the group stages in 2019. They will be up against a tough opponent in Kerala Blasters, who are the current toppers of their group.

Bengaluru FC will be fielding a young team in the Durand Cup. They will feature 2020-21 I-League Golden Boot winner Bidyashagar Singh and 20-year-old Sivasakthi, who was impressive in the Bangalore Super Division last year. Sivasakthi also made his Bengaluru FC senior team debut in the AFC Cup.

“We had a long pre-season due to the AFC Cup but what we have done is we have got a squad which wasn’t a part of the team for long. You can say these are guys who didn’t get enough games. So, you will find mostly we have the U18 graduates who are in the reserve squad now and a few of the reserve team players who Marco has got them in the senior team who he feels are a good potential for the future.”

Durand Cup – A tournament of opportunities for players

Moosa said the Durand Cup is a tournament where the bench strength of Bengaluru FC can also be tested. He feels it will also put the team in good stead. He explained:

“Players like Sivasakthi, Damaitphang, Namgyal Bhutia, Biswa Darjee are there whom we want to give opportunities. It’s such a big game and a big tournament for them. We want to understand how well they can perform under pressure in a big competition.”

Kerala Blasters go into the all-ISL clash at the Durand Cup after a convincing 1-0 win over the Indian Navy. Kerala Blasters look in good shape heading into the match against Bengaluru FC and coach Ivan Vukomanovic was pleased with the way things have panned out so far for the Blasters in the Durand Cup. He said:

“We are pleased with the victory in our first game, it gave us a good start at the tournament. We are in a period of pre-season preparation for the ISL and it is obvious that we are not at the level we want to be. There is still a long path and hard work in front of us. We are still waiting for our reinforcements to arrive and complete our squad before going to Goa for the final part.”

“There were good and less good things during our first game. We are working hard to improve and be better in every aspect. We are happy with the current work and shape of our players. It gives us good basics for the upcoming period. On the other hand, we are not happy with injuries. It was not planned and we will try to avoid injuries in this part of the preparation period.”

The Durand Cup game will be streamed from 3 PM onwards on September 15 on the AddaTimes app. The service is a paid subscription. You can also follow the LIVE coverage at Sportskeeda.

Loading...
Denial of responsibility! NewsUpdate is an automatic aggregator around the global media. All the content are available free on Internet. We have just arranged it in one platform for educational purpose only. In each content, the hyperlink to the primary source is specified. All trademarks belong to their rightful owners, all materials to their authors. If you are the owner of the content and do not want us to publish your materials on our website, please contact us by email – [email protected]. The content will be deleted within 24 hours.
Loading...
BengaluruBengaluru FCbest sports newsBlastersCupDurandDurand Cup 2021Durand Cup 2021 Schedule