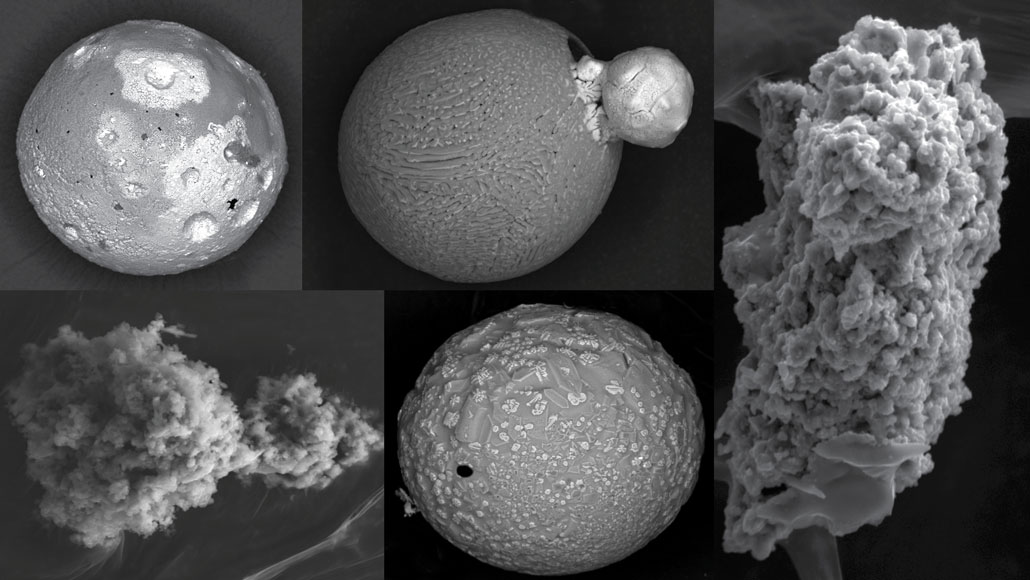 Earth sweeps up 5,200 tons of extraterrestrial dust each year

As our planet orbits the sun, it swoops through clouds of extraterrestrial dust — and several thousand metric tons of that material actually reaches Earth’s surface every year, new research suggests.

During three summers in Antarctica over the past two decades, researchers collected more than 2,000 micrometeorites from three snow pits that they’d dug. Extrapolating from this meager sample to the rest of the world, tiny pebbles from space account for a whopping 5,200 metric tons of weight gain each year, researchers report in the April 15 Earth and Planetary Science Letters.

Much of Antarctica is the perfect repository for micrometeorites because there’s no liquid water to dissolve or otherwise destroy them, says Jean Duprat, a cosmochemist at Sorbonne University in Paris (SN: 5/29/20). Nevertheless, collecting the samples was no easy chore.

First, Duprat and colleagues had to dig down two meters or more to reach layers of snow deposited before 1995, the year when researchers set up a field station at an inland site dubbed Dome C. Then they used ultraclean tools to collect hundreds of kilograms of snow, melt it and sieve the tiny treasures from the frigid water.

In all, the team found 808 spherules that had partially melted as they blazed through Earth’s atmosphere and another 1,280 micrometeorites that showed no such damage. The particles ranged in size from 30 to 350 micrometers across and all together weigh mere fractions of a gram. But the micrometeorites were all found within three areas totaling just a few square meters, the merest fraction of Earth’s surface. Assuming that particles of space dust are just as likely to fall in Antarctica as anywhere else let the team estimate how much dust fell over the entire planet.

The team’s findings “are a wonderful complement to previous studies,” says Susan Taylor, a geologist at the Cold Regions Research and Engineering Laboratory in Hanover, N.H., who was not involved in the new study. That’s because Duprat and colleagues found a lot of the small stuff that would have dissolved elsewhere, she notes.

About 80 percent of the micrometeorites originate from comets that spend much of their orbits closer to the sun than Jupiter, the researchers estimate. Much of the rest probably derive from collisions of objects in the asteroid belt. All together, these tiny particles deliver somewhere between 20 and 100 metric tons of carbon to Earth each year, Duprat and colleagues suggest, and could have been an important source of carbon-rich compounds such as amino acids early in Earth’s history (SN: 12/4/20).

Denial of responsibility! NewsUpdate is an automatic aggregator around the global media. All the content are available free on Internet. We have just arranged it in one platform for educational purpose only. In each content, the hyperlink to the primary source is specified. All trademarks belong to their rightful owners, all materials to their authors. If you are the owner of the content and do not want us to publish your materials on our website, please contact us by email – [email protected]. The content will be deleted within 24 hours.
best technology newsdustEarthextraterrestrialnews update technewsupdatesweepstech news

Remember, Apple AirTags and ‘Find My’ app only work because of a vast, largely covert tracking network