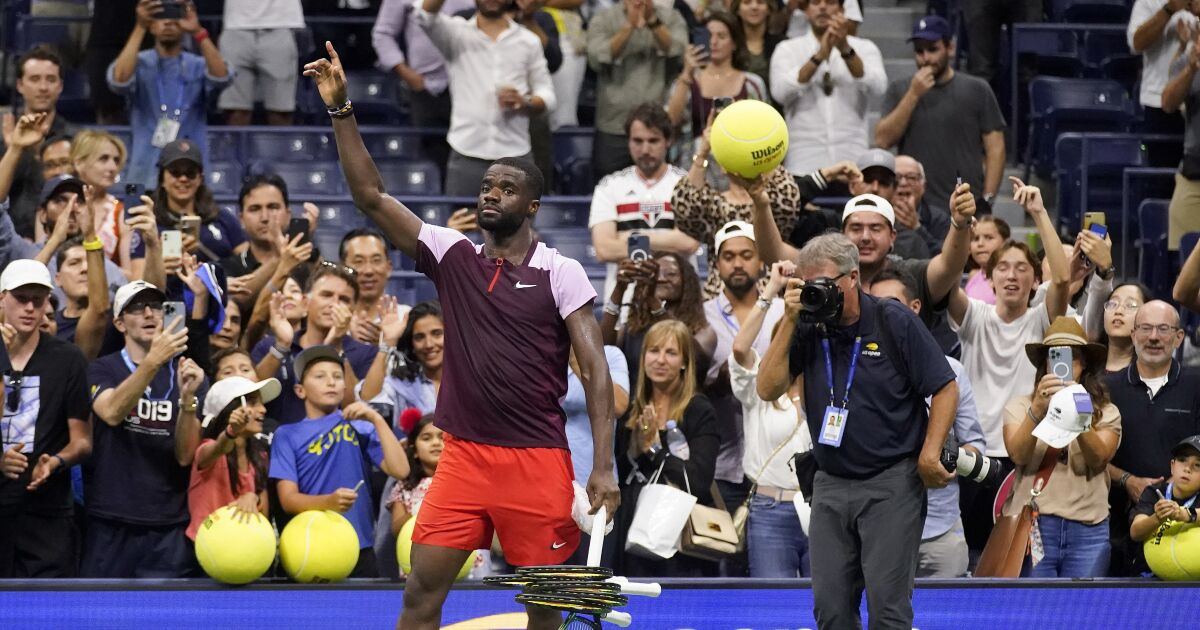 Frances Tiafoe put his heart on the line in his U.S. Open semifinal against Carlos Alcaraz. He never gives less. In the biggest match of his life he gave even more — more of an incredible effort and more of himself, a luminous athlete whose performance transcended the numbers that said he had lost.

Tiafoe’s grandest hope, as the son of a custodian at a Maryland tennis center, was to get a tennis scholarship because his family couldn’t afford to send him to college. On Friday, as the first Black American man to reach the semifinals of the U.S. Open since Arthur Ashe in 1972, Tiafoe fought back in an electric fourth set against one of the sport’s brightest stars even after it seemed his legs no longer would carry him and his lungs wouldn’t take in any air.

Tiafoe’s run at Flushing Meadows ended when Alcaraz, a 19-year-old phenom from Spain, outlasted him 6-7 (6), 6-3, 6-1, 6-7 (5), 6-3 on the court named for Ashe. Alcaraz, remarkably energetic and resilient after playing a five-hour 15-minute semifinal that ended at 2:50 a.m. on Thursday, will play for the title and the No. 1 ranking Sunday. He will face Casper Ruud of Norway, who reached his second major final with a 7-6 (5), 6-2, 5-7, 6-2 decision over Karen Khachanov of Russia. Ruud lost to Rafael Nadal in the final of the French Open in June.

“It’s amazing to be able to fight for big things,” Alcaraz said.

Tiafoe has been doing that all his life.

“I feel like I let you guys down,” he told the crowd, which signaled its disagreement. “This one hurts.

“Carlos, you’re going to win a lot of Grand Slams. I’m going to come back and win this thing one day.”

Tiafoe’s loss meant American men again failed to win a Grand Slam singles title, as they have every year since Andy Roddick triumphed at Flushing Meadows in 2003. In winning, Alcaraz joined Pete Sampras as the only teenagers to reach the U.S. Open men’s singles final since the Open Era began in 1968 and will play in his first Grand Slam final.

But in terms of resilience and defiance, the star of the day was Tiafoe, who seemed on his way out the door after losing the second and third sets on heavy, listless legs. He found another gear in the fourth set, saving a match point in the 10th game and winning the set by improving to 8-0 in tiebreaks here. The crowd loved it, loved him.

In the fifth set he fought back from down 2-0 and fended off three match points before Alcaraz, poised and calm, rediscovered his range. “This is amazing,” Alcaraz said, and he wasn’t exaggerating.

Ruud had an easier time against Khachanov, capturing the first set by winning a 55-shot rally with a backhand down the line. “Towards the end the pulse was getting very high and the legs were almost shaking at a point,” Ruud said.

He wrapped it up with a forehand, smiling slightly but not jumping or dancing. He lifted his arms and pumped his fist a few times but otherwise was reserved.

“I always try to keep calm. Even though I’m probably sometimes boiling over in frustration, I try not to show my opponents that I am frustrated because I think that they can get a small advantage if they see that you are frustrated,” he said. “Yeah, there is acting in sports. Tennis especially. It’s such a mental and psychological game that any small detail can help you win the match.”

Ruud is the son of former tour player Christian Ruud, who ranked as high as No. 39 in the world in 1995. Christian Ruud now coaches his son, who is notably stoic. Although he didn’t show much excitement over his success Friday, he clearly savored a chance to acquit himself better than he had in his French Open loss to Nadal, who dismissed him 6-3, 6-3, 6-0.

“After Roland Garros I was, of course, extremely happy,” Ruud said, using the players’ name for the Paris tournament, “but also humble enough to think that could be my only final of my career.”

Happily for him, he was wrong.

The women’s final, to be played Saturday, features the two most consistent competitors this year. World No. 1 Iga Swiatek of Poland will continue trying to extend her success beyond clay and add the U.S. Open title, on a hard court, to her two French Open championships. No. 5 seed Ons Jabeur of Tunisia, the first African or Arab woman to reach the U.S. Open singles final, is a worthy opponent as she seeks her first Slam singles title.

Swiatek, who won in Paris this year and in 2020, credited sports psychologist Daria Abramowicz for helping her develop the clarity and confidence to make strategic adjustments on the fly. Swiatek lost the first set of her semifinal against Aryna Sabalenka on Thursday but persevered to win 3-6, 6-1, 6-4.

“Earlier, I felt like my emotions kind of were taking over and I was panicking a little bit when I was losing,” she said. “For sure I grew up, I learned a lot. And the work we’ve put in with Daria for sure helped. Right now it’s just easier for me to actually logically think what I can change. And I feel like I have more skills to do that than one type of way to play, you know.”

Jabeur, who lost the Wimbledon final to Elena Rybakina, doesn’t just visualize success: she speaks it into truth. So far, so good.

“Definitely saying out loud what I want to do is part of me achieving things,” she said. “I remember saying that I want to be a top-five, I wanted to win a Grand Slam, and I wanted to qualify for the Masters [annual final]. You know, two, check, check, there is one more is going to check hopefully soon.”

One more check is awaiting Alcaraz or Ruud too.

Denial of responsibility! NewsUpdate is an automatic aggregator around the global media. All the content are available free on Internet. We have just arranged it in one platform for educational purpose only. In each content, the hyperlink to the primary source is specified. All trademarks belong to their rightful owners, all materials to their authors. If you are the owner of the content and do not want us to publish your materials on our website, please contact us by email – [email protected]. The content will be deleted within 24 hours.
best sports newschampionElliottEndsFranceshesnews update sportsnewsupdate

US Open 2022 Women’s Singles Final Live Streaming: When and where to watch Iga Swiatek vs Ons Jabeur

The Best Marvel Games Of All Time