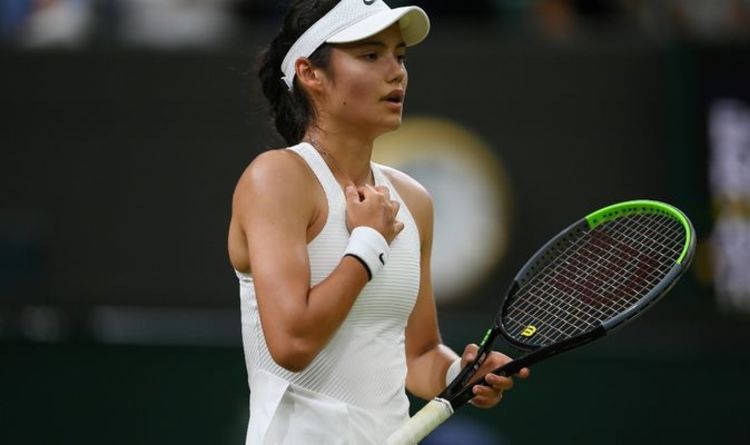 Emma Raducanu has explained what happened when she retired from her Wimbledon match. Before her triumph in New York, the 18-year-old was competing in the fourth round of Wimbledon against Australia’s Ajla Tomljanović, when she was forced to quit midway through.

The teen described what she endured on that day, when she had difficulty breathing during her match, and stated that it was due to a fitness issue.

“I took away that it was for me more of a physical issue,” she said.

“To win a Grand Slam you need a lot of mental strength so I think the resilience part of it sort of speaks for itself.”

Despite the setback after what was a promising tournament at SW19, Raducanu admitted the heartbreaking exit from Wimbledon helped prepare for her triumph in New York.

“I needed to go through all of that to win a Slam. Physically I’ve still got a lot of work to do because I’m still new to the game and haven’t had time to really develop,” she continued.

“On tour for the last four or five weeks I think naturally with each match and tournament I’ve played I’ve just increased my endurance a bit.”

Raducanu says she was “honoured” by the Queen’s message and will be framing it and keeping it in her room.

“I haven’t even checked my messages yet,” she said.

“I’ve just been trying to enjoy the moment. With my team the night of the final we just had a really nice night reflecting.

“Everything has gone so fast. We were taking care of every single day and before you know it three weeks had gone.

“We just got to reflect and share a few stories and it was a really nice night to have with everyone.”

Denial of responsibility! NewsUpdate is an automatic aggregator around the global media. All the content are available free on Internet. We have just arranged it in one platform for educational purpose only. In each content, the hyperlink to the primary source is specified. All trademarks belong to their rightful owners, all materials to their authors. If you are the owner of the content and do not want us to publish your materials on our website, please contact us by email – [email protected]. The content will be deleted within 24 hours.
Loading...
addressesbest sports newsEmmaExplainshappenednews update sportsnewsupdateRaducanu