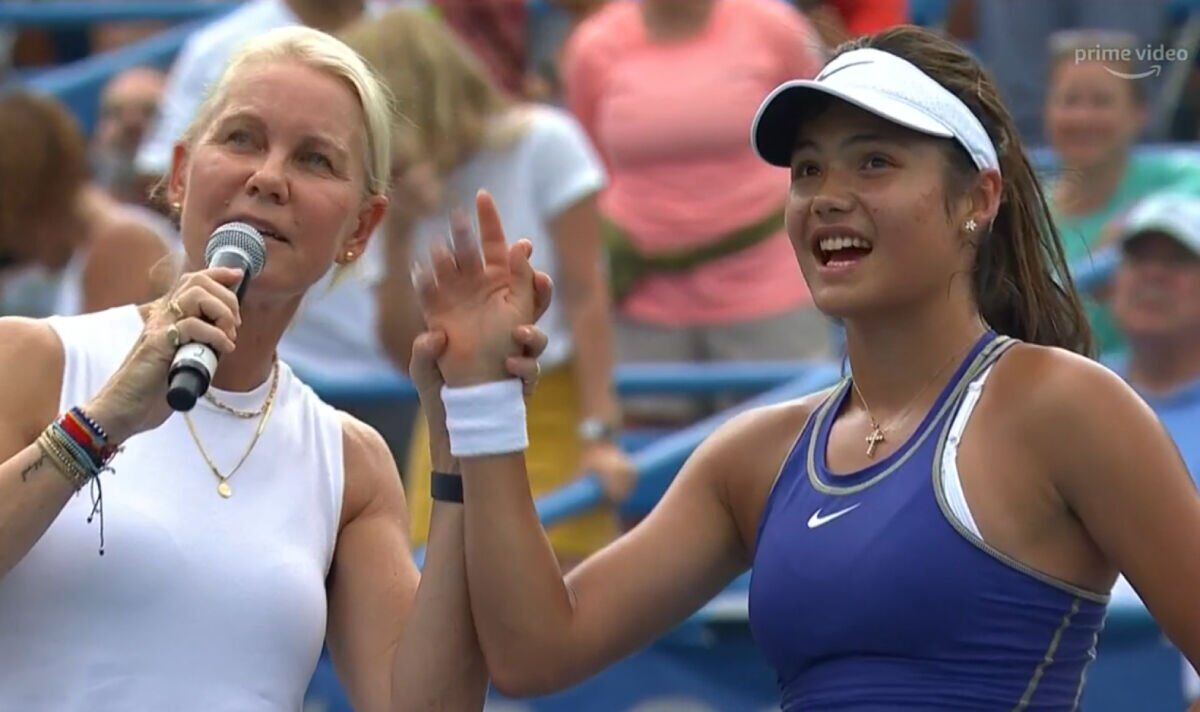 Emma Raducanu apologised to the Citi Open crowd for revealing “too much information” as she went into gross detail about her blisters after beating Camila Osorio in a rollercoaster match in Washington. British No 1 Raducanu won 7-6 (7-5), 7-6 (7-4) in two hours and 50 minutes to reach the quarter-finals of the tournament.

But the Bromley-born teenager – whose win-loss record in 2022 now reads 11-12 – needed a medical timeout late in the second set due to nasty blistering on her right hand. And she explained post-match that her skin had been “ripping off” in the searing 36-degree heat in the United States.

That came after Osorio herself had to receive medical treatment on a foot blister. The on-court interviewer said: “You saw she took a timeout because of blisters on her feet and obviously you had some blisters on your hands. I wish you guys could see this. It’s not pretty… look at that!”

“It was just normal calluses. Throughout the match, my skin was just ripping off. In the beginning there was like a flap then the flap got ripped off. It was pretty raw and open. Sorry if that’s TMI (too much information) but you know.”

The interviewer added: “I’m really close to them and the calluses are pretty ugly!” Raducanu added of her exhausting win in the blazing temperatures: “I think I died about three times in that match and then came back. I don’t know how! Camila is such a battler.

“Every single point I was working so, so hard and sometimes it wasn’t necessarily the strongest shots but you’ve just got to generate, generate over and over again. She’s such a fighter and even when I was up in the second set, 4-2, 40-love, three break points, she came back fighting. When she comes back, the dynamic of the match changes a little bit so I’m really pleased to have got through that one.”

The British No 1, the Citi Open’s highest remaining seed, takes on Russian Ludmilla Samsonova in her next match. Samsonova needed three sets to get past Ajla Tomljanovic on Thursday.

And Raducanu continued: “She’s a big ball-striker and she has the ability to take the game out of your hands. So for me it’s just about recovering as best as I can for tomorrow.

“She had a three-match tomorrow so I think both of us are going to be feeling it. It’s going to be a matter of who stays tough. We’ll see how the dynamic goes.”

Denial of responsibility! NewsUpdate is an automatic aggregator around the global media. All the content are available free on Internet. We have just arranged it in one platform for educational purpose only. In each content, the hyperlink to the primary source is specified. All trademarks belong to their rightful owners, all materials to their authors. If you are the owner of the content and do not want us to publish your materials on our website, please contact us by email – [email protected]. The content will be deleted within 24 hours.
apologisesbest sports newsCitiEmmaFansinjurynews update sportsnewsupdate