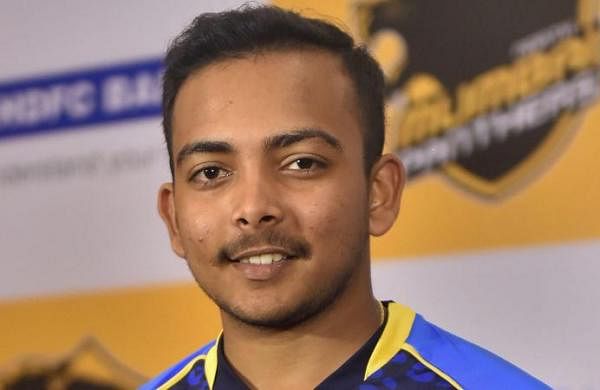 CHENNAI: One bad IPL and a Test match at Adelaide where India were all out for 36 is all that it needed Prithvi Shaw to be shunted out of the playing XI. It has taken four months for Shaw to redeem himself, be back among runs and put himself in contention for a recall to the Indian team for the tour of England that follows soon after the IPL. It seems like a smooth sailing for the 21-year-old. However, back in January it was anything but that.

Soon after he began warming the bench during the Test series in Australia, Prashant Shetty, Shaw’s childhood coach, exchanged casual chats with his ward. According to Shetty, he doesn’t remember having any conversation about cricket or technique. “He was already getting roasted by everyone. There was nothing for me to say. I just told him not listen to any of those and kept his mind engaged with other things,” Shetty told Express. Ever since Shaw walked into his coaching camp in Mumbai as a seven-year-old, he has been a standout talent, capable of bouncing back from setbacks he faced.

Shetty refers even this as a slight setback that can happen to any cricketer, let alone a 21-year-old who is in his early days as an international cricketer. “Lot of postmortem was going on…’why is he getting bowled through the gate, why he is struggling.’ There was nothing majorly wrong with his technique. He was actually reacting late, which is why he was not able to spend much time in the middle. He is only 21 and he went to Australia on the back of IPL, which was his first outing in six months. When you are not prepared well and not in a good mindset, the footwork will be restricted. And that is what happened to him,” Shetty added.

After landing in Mumbai, Shaw didn’t waste any time in ringing Shetty. The next few days would see Shaw try to regain confidence. The criticism from outside led to Shaw even worrying about his own technique, so much so that, he would ask Shetty if he had to change it to be back among runs. “After getting dropped from the Test side after the first Test in Australia, I started worrying about my technique on why I was getting bowled. Even if it was a minor mistake, I wanted to minimize that. I started working on it. After returning from Australia, I worked with my coach Prashant sir and also Pravin Amre sir before going to the Vijay Hazare Trophy, and it worked quite well,” said Shaw, who is a vital cog for Delhi Capitals.

Shetty’s first job was to erase those doubts from Shaw’s mind. Especially those about his bat-swing – which used to originate from gully – which was pointed out by experts as his biggest undoing. “The good thing was Shaw knew he didn’t have a spot in the Indian team and for right reasons. He was willing to work and do what ever to get there, but had too may thoughts in his head. So we just cleared those and gave him the trust that there is nothing to worry. If bat swing is an issue, Steve Smith and Hashim Amla wouldn’t have made runs. It was only a matter of him beginning to react quickly and once that happened, everything fell into place,” Shetty said.

Once he found his movement back, Shaw began to play behind the line of the ball in the nets. The Vijay Hazare Trophy came at the right point in time as Shaw was told not just to score runs, but make daddy hundreds. End result: He tallied 827 runs in eight matches including a double century in Mumbai’s title-winning campaign. “He is natural stroke-player, who is looking to score. It is in his instincts. If you try to curb that, he is going nowhere. Everyone knew he will score runs, but the manner in which he scored is what that has put him back into contention,” Shetty said.

Denial of responsibility! NewsUpdate is an automatic aggregator around the global media. All the content are available free on Internet. We have just arranged it in one platform for educational purpose only. In each content, the hyperlink to the primary source is specified. All trademarks belong to their rightful owners, all materials to their authors. If you are the owner of the content and do not want us to publish your materials on our website, please contact us by email – [email protected]. The content will be deleted within 24 hours.
Australia vs India seriesbest sports newsEncouragingintentIPLnews update sportsnewsupdatePrithvi Shaw

The cyborg behind the sales counter