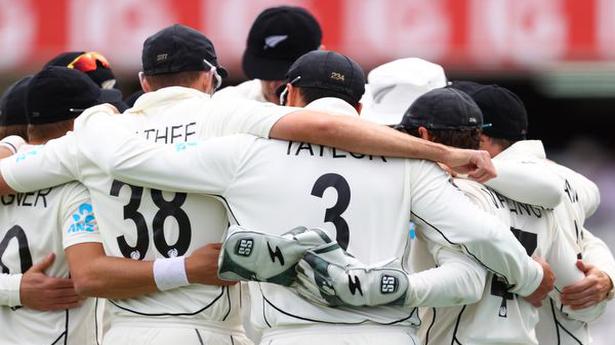 Chasing 273 for a 1-0 lead in the two-match series, England finished their second innings with 170-3 in 70 overs before both sides shook hands on a draw late in the evening.

England offered stiff resistance in the final session to secure a tedious draw against New Zealand on day five of the first test at Lord’s on Sunday.

Chasing 273 for a 1-0 lead in the two-match series, England finished their second innings with 170-3 in 70 overs before both sides shook hands on a draw late in the evening.

Having lost day three’s play due to rain, New Zealand skipper Kane Williamson declared their second innings at 169-6 at lunch.

England openers Rory Burns and Dom Sibley arrived at the crease focusing only on blunting the new-ball bowling attack in a bid to save the test match.

The pair showed incredible patience in adding 49 runs by the 24th over before Burns (25) was caught in the slip cordon off Neil Wagner’s bowling.

Zak Crawley (2) did not last long at the crease as he dragged Tim Southee’s outswinging delivery straight to gully.

Captain Joe Root (40) was the only wicket to fall in the final session when he was trapped leg-before by Wagner.

Sibley continued to frustrate the bowlers at the other end and finished with 60 off 207 deliveries, while Ollie Pope was unbeaten on 20.

Earlier, New Zealand hoped to turn the result in their favour as they added to their overnight score of 62-2 with the loss of another four wickets before rain forced an early lunch.

England debutant Ollie Robinson was once again lethal in his opening spell, picking off the first wicket of the morning session as New Zealand nightwatchman Wagner edged a bouncer through to wicketkeeper James Bracey.

The tourists continued to look for boundaries to give their bowlers a chance to fight for a win but lost wickets at regular intervals.

Tom Latham was trapped leg-before on 36 by Stuart Broad before a flying Bracey caught Ross Taylor (33) off Mark Wood’s bowling.

Henry Nicholls (23) was caught trying to reverse-sweep Joe Root’s off-spin but not before New Zealand had added 97 crucial runs in the morning session.

Despite Burns’ determined 132, England were bowled out for 275 on day four as New Zealand secured a first-innings lead of 103, with pace bowler Southee taking six wickets for 43 runs.

Loading...
Denial of responsibility! NewsUpdate is an automatic aggregator around the global media. All the content are available free on Internet. We have just arranged it in one platform for educational purpose only. In each content, the hyperlink to the primary source is specified. All trademarks belong to their rightful owners, all materials to their authors. If you are the owner of the content and do not want us to publish your materials on our website, please contact us by email – [email protected]. The content will be deleted within 24 hours.
Loading...
best sports newscricket newscricket news livecricket resultsdrawEngenglandEngland national cricket team