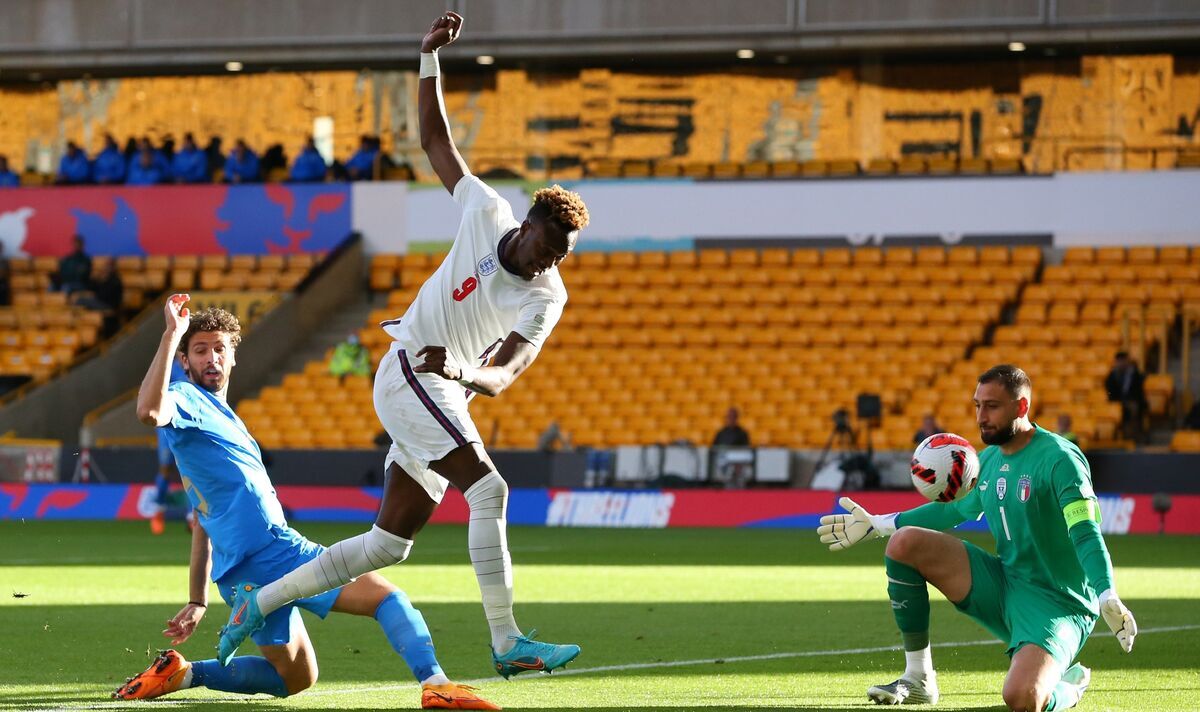 England remain rooted to the bottom of their Nations League group despite an entertaining goalless draw with Italy. Tammy Abraham impressed in place of the rested Harry Kane, with both sides creating numerous chances in an open game. Neither team were able to find a breakthrough though, and Daily Express Sport takes a look at five things we learned from the draw.

Handed his first England start since October, Tammy Abraham put himself in pole position to serve as Harry Kane’s back-up in the World Cup. Abraham enjoyed an impressive campaign for Roma, setting a club record for most goals in a debut season.

While he was not on the scoresheet at Molineux, Abraham’s work off the ball was a key factor in England creating the best of the chances. His pressing of Italy keeper Gianluigi Donnarumma forced the PSG star into making several errors.

Though he failed to put a shot on target, it was still an impressive audition from the Roma man. His performance would appear to put him ahead of the likes of Dominic Calvert-Lewin and Ollie Watkins in the race for a seat on the plane to Qatar.

England may have kept a clean sheet, but defensive concerns again reared their ugly head against the Azzurri. Harry Maguire was partnered by Fikayo Tomori, with both centre-backs having shaky moments.

The desire of fullbacks Reece James and Kieran Trippier to bomb forward also left the Three Lions exposed to counter-attacks. While Italy failed to capitalise on that, Gareth Southgate will not be happy at the ease with which his side were carved open at times.

READ MORE: England vs Italy: Why is Nations League match behind closed doors

Though Jordan Pickford has remained Southgate’s first-choice keeper, the Everton star is facing an increasing challenge from Aaron Ramsdale for his starting spot. The Arsenal keeper was selected to start against the Italians in what was his second England game.

He demonstrated the passing skills that Southgate is looking for in his keeper, completing 11 of his 13 attempts. He also stayed calm under pressure, particularly when receiving passbacks under pressure from Italian forwards.

Ramsdale also impressed in the tradition keeper requirement of making saves, bailing out his team-mates on several occasions, most notably when he raced across his goal to prevent Sandro Tonali with his feet. It was a performance that shows Pickford has real competition for his spot between the sticks.

Mount hits back at doubters

Much has been made of Mason Mount’s continued presence in the England line-up, with the Chelsea man starting his third successive game against Italy. There have been questions around his underwhelming performances for the Three Lions in recent months, failing to score since March 2021.

But he made the first step in hitting back at his critics at Molineux, putting in a lively display. Mount was unlucky to be denied by Donnarumma early on and he had more touches than any other England attacker in the first-half.

Denial of responsibility! NewsUpdate is an automatic aggregator around the global media. All the content are available free on Internet. We have just arranged it in one platform for educational purpose only. In each content, the hyperlink to the primary source is specified. All trademarks belong to their rightful owners, all materials to their authors. If you are the owner of the content and do not want us to publish your materials on our website, please contact us by email – [email protected]. The content will be deleted within 24 hours.
Abrahambest sports newsdrawenglandEntertainingimpressesItalyLearned