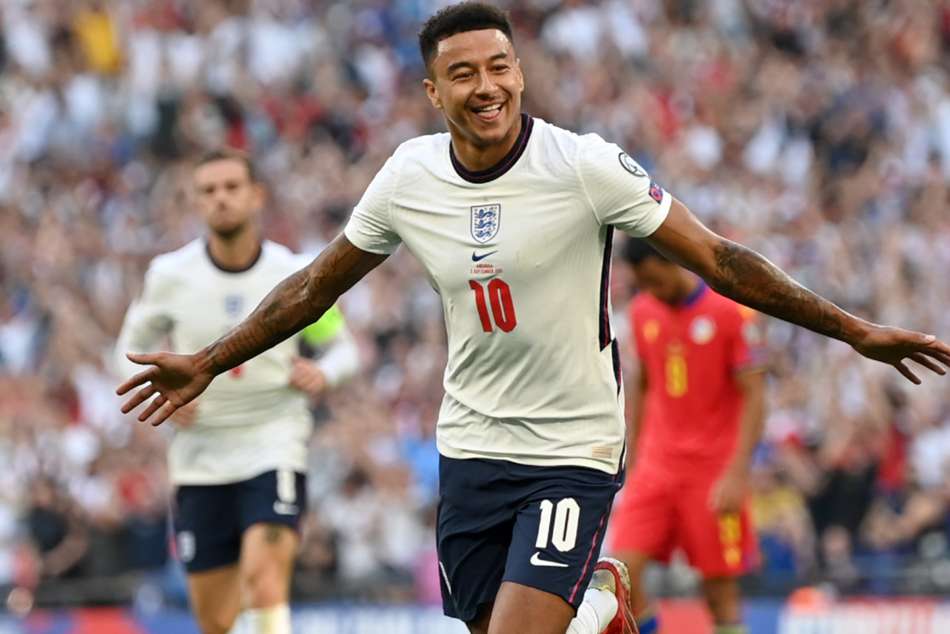 Gareth Southgate made 11 changes to the team that won in Hungary by the same scoreline, with Trent Alexander-Arnold starting in midfield and Patrick Bamford handed a full debut in attack.

Jesse Lingard broke the deadlock after 18 minutes but it was not until the final quarter of the game that the Euro 2020 finalists at last pulled clear on the scoresheet, Harry Kane scoring a penalty before Lingard prodded home a clever second.

Bukayo Saka headed in a late fourth from Lingard’s cross after England caught Andorra napping with a quick corner.

Lingard, who has only played four minutes for Manchester United this season, was in the mood to impress from the off. He finished with aplomb with his left foot after Saka’s cross was nodded into his path, and only the offside flag denied him a quick-fire second when he raced through and lobbed goalkeeper Josep Gomes.

Bamford almost provided a debut assist for Conor Coady, his header down hooked over by the Wolves defender from six yards.

Reece James crashed a fine effort off the crossbar early in the second half but, with Andorra keeping the home side at bay, Southgate turned to Kane, Jack Grealish and Mason Mount off the bench.

That was the trio that finally got England their second goal: Grealish and Mount combined well, the Chelsea man was bundled over in the box by Christian Garcia, and Kane converted from the spot.

Lingard had a quieter second half but made it 3-0 with 12 minutes remaining, a toe-poke from the edge of the box bamboozling goalkeeper Gomes and finding the bottom-right corner.

And it was the United man who delivered a pinpoint cross for Saka to nod in the fourth, the Arsenal winger marking his 20th birthday in style.

2006 – Bukayo Saka is the first player to score on his birthday for the senior men’s England team since Steven Gerrard vs Hungary in May 2006. Party. pic.twitter.com/ORqSchhFAW

What does it mean? England comfortably on track for Qatar

With five wins from five games and just one goal conceded, England are six points clear at the top of Group I and their place at the World Cup is now well within reach.

This straightforward win also allowed Southgate to hand some fringe players the chance to impress while experimenting with his line-up, Alexander-Arnold’s and James’ credentials in midfield perhaps something to consider for tougher matches.

Andorra, with one win from their five qualifiers, are fifth in the group.

Despite a lack of action at club level, Lingard looked sharp and eager to impress, taking his two chances extremely well and completing all but six of his passes.

He will hope to have caught the eye not just of Southgate, but also of United manager Ole Gunnar Solskjaer ahead of the resumption of the Premier League next weekend. There was something pointed about his Cristiano Ronaldo-esque celebration after his opener.

A missed chance to impress?

While the game was something of an exercise in possession – England had 90 per cent of the ball – there was an argument that some could have done more to grab Southgate’s attention.

Bamford only had 17 touches in his 62 minutes on the pitch, while Alexander-Arnold failed to create a goalscoring chance until the 89th minute.

England face a far sterner test on Wednesday against Poland in Warsaw. Andorra will visit the Ferenc Puskas Stadium to face Hungary.

Denial of responsibility! NewsUpdate is an automatic aggregator around the global media. All the content are available free on Internet. We have just arranged it in one platform for educational purpose only. In each content, the hyperlink to the primary source is specified. All trademarks belong to their rightful owners, all materials to their authors. If you are the owner of the content and do not want us to publish your materials on our website, please contact us by email – [email protected]. The content will be deleted within 24 hours.
Andorrabest sports newsenglandleadsLingardLionsnews update sportsnewsupdate

Disney And Tencent Announce A Mobile Avatar MMO Is In The…

Wordle clones are missing what makes the original great: its…