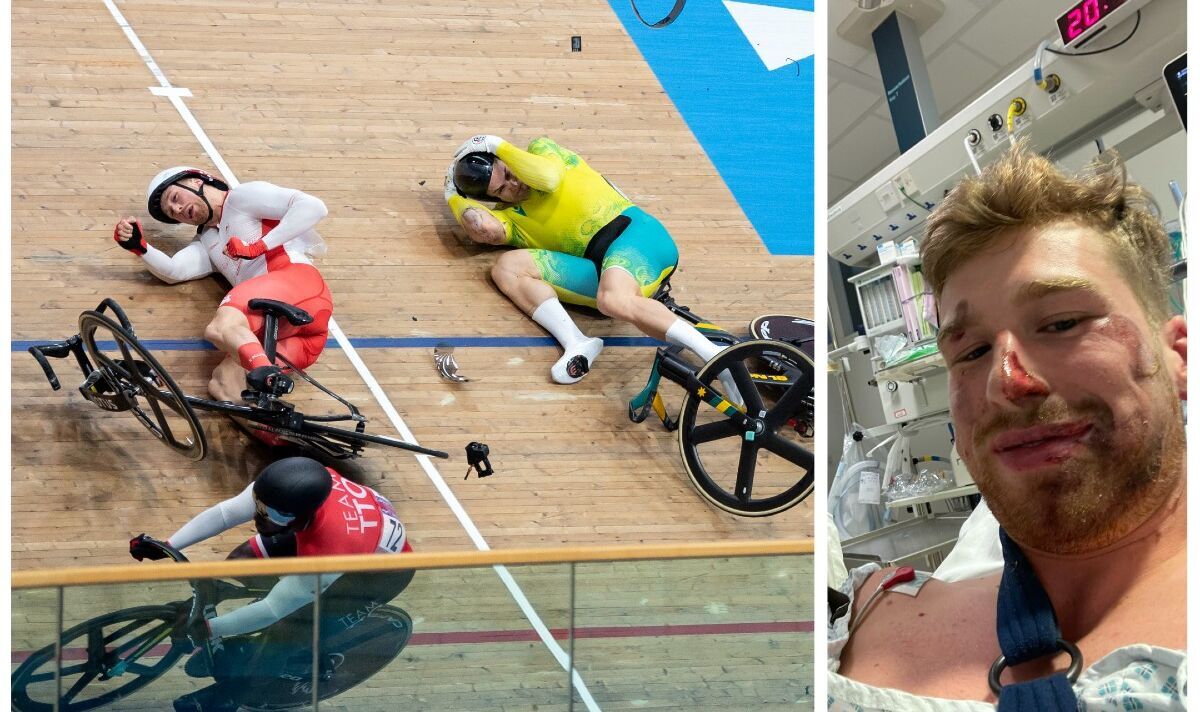 England cyclist Joe Truman has taken to Twitter to show the painful injuries he suffered during his horror crash in the semi-finals of the men’s Keirin at the Commonwealth Games. The 25-year-old was knocked unconscious and broke his collarbone after he crashed into Australian rider Matthew Glaetzer who had already fallen.

The incident happened in the final lap of the race after Glaetzer touched wheels with Scotland’s Jack Carlin, who also happens to be Truman’s former housemate, when the pack were travelling at 45mph.

Truman went flying over the Aussie and hit the ground hard, with his face and upper body taking most of the impact. He was left unconscious and lay stricken across the velodrome track as medical staff rushed to assist him.

He regained consciousness and left the venue in a wheelchair while receiving oxygen. He was taken to hospital from where he has posted an update. He appears to be in high spirits after making light of being knocked out.

“Thanks for all the well-wishes after yesterday’s crash, I was enjoying my little mid-race snooze! Will get this shoulder fixed and be back soon,” he wrote on Twitter.

He was proud to show off his badly cut and bruised face while his arm was also in a sling. He was also keen to thank Royal London hospital and England cycling doctor Clint Gomes for the help that he received.

It was not the first injury issue the cyclist had suffered in his career after he faced two years battling a back problem which ruled him out of the Olympics in Tokyo.

Carlin went on to claim silver in the event but his focus after the race was on the health of his former housemate.

“It’s not easy seeing your pal lying on the ground like that,” the Scot said after the race. “There’s nothing worse than watching your mate crash.

“He’s a team-mate and I lived with him for a long time. Fortunately, he got up and was moving around, but he took a good hit to his head.

“This is just another hiccup in the road for Joe. He’s got a lot to aim for, next year we’ve the Nations Cup, the world championships in Glasgow and the Paris Olympics – he’s got time on his side and, knowing Joe, he will be back stronger than ever.”

It was not the only major crash to take place at the Velodrome on Sunday with England rider Matt Walis crashing into the crowd injuring himself and a fan.

Denial of responsibility! NewsUpdate is an automatic aggregator around the global media. All the content are available free on Internet. We have just arranged it in one platform for educational purpose only. In each content, the hyperlink to the primary source is specified. All trademarks belong to their rightful owners, all materials to their authors. If you are the owner of the content and do not want us to publish your materials on our website, please contact us by email – [email protected]. The content will be deleted within 24 hours.
bedbest sports newscrashcyclistEnglishHorrorHospitalinjuries

CWG 2022: ‘Everyone knows about Dhoni, hope people know about us too’ | Commonwealth Games 2022 News – Times of India