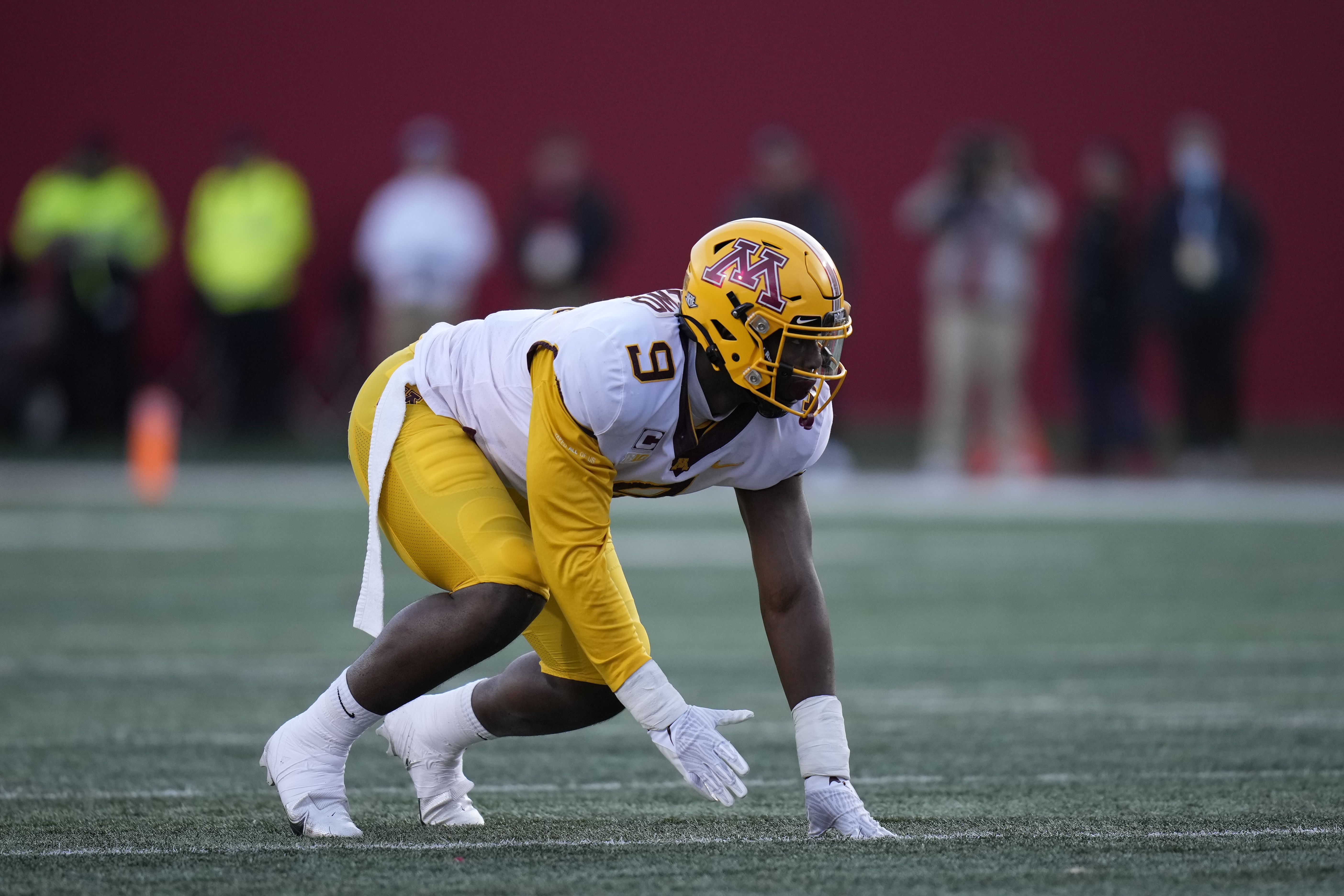 — Good length. Consistently able to engage on his terms.

— Above-average burst off the snap. Springy out of his stance despite a massive frame.

— Relatively easy mover for his size. Can cover decent ground in space.

— Shows good power in his hands upon engagement.

— Above-average eyes and discipline. Does well to stay in his gap and take on blocks as necessary.

— Functional anchor on the edge.

— Tweener frame. On the heavier side for an edge, but perhaps too light to slide inside in the NFL.

— Stop/start athleticism is a concern. Struggles to regain momentum if he slows down for any reason.

— Uninspired hand usage as a pass-rusher. Sometimes wins with length alone, but needs to find consistency as well as counters.

— Poor bend. Struggles to drop his hips while maintaining balance and momentum.

Esezi Otomewo leaves college as a defensive end, but he may be best suited to kick inside more in the NFL.

At 6’5″ and 282 pounds, Otomewo is a daunting figure for opposing offensive linemen. He sports great length to complement his height and weight, allowing him to nearly match offensive tackles in terms of build.

Otomewo backs up his frame with impressive play strength, both in his upper and lower body. He strikes well with his hands in the run game and often does a good job remaining firm in his anchor. Combine that with flashes of good snap get-of and smooth movement in space, and the result is an occasionally overwhelming defensive linemen.

On the flip side, Otomewo shows a stiff lower body when trying to turn the corner as a pass-rusher. He often struggles to drop his hips and generate leverage, and he also lacks the ability to widen himself out and run the arc. His stop/start athleticism is a concern as well, which makes it difficult for him to toy with stutters or counter-moves.

Otomewo does not have the best hand usage at this stage, either, which often makes him rely on leg drive and length to win pass-rushing reps. He can use those tools to win from time to time, but not consistently enough to say he is an effective pass-rusher right now.

Otomewo’s tweener build and lack of pass-rushing traits make him a tough projection. He’s likely only a fit for certain teams. With that said, Otomewo can slot in between 3-tech and 5-tech to provide reliable run defense off the bench.

Denial of responsibility! NewsUpdate is an automatic aggregator around the global media. All the content are available free on Internet. We have just arranged it in one platform for educational purpose only. In each content, the hyperlink to the primary source is specified. All trademarks belong to their rightful owners, all materials to their authors. If you are the owner of the content and do not want us to publish your materials on our website, please contact us by email – [email protected]. The content will be deleted within 24 hours.
best sports newsDraftEseziMinnesotanews update sportsnewsupdateNFLOtomewo

Still I Rise for Nilgiris 2000 Guineas

The Easiest Way To Transfer Safari Bookmarks To Google…