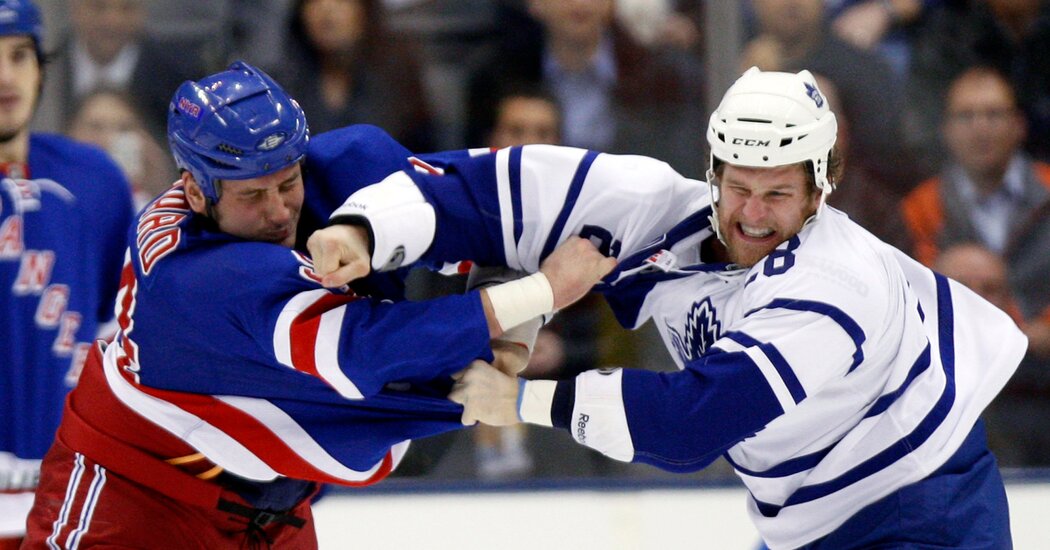 Fighting in the N.H.L. Reveals Few, if Any, Winners

Ten years ago this month, a popular Rangers enforcer, considered by some to be the toughest man and the most fearsome fighter in the N.H.L., died alone in his apartment from an accidental overdose of painkillers and alcohol.

That man, Derek Boogaard, 28, was later determined to have a severe case of chronic traumatic encephalopathy, or C.T.E., the degenerative brain disease caused by repeated blows to the head.

Boogaard’s death came less than a year after that of Bob Probert, a beloved roughneck of the Detroit Red Wings. The list of players who died before age 50 and were later found with C.T.E. grew quickly: Rick Rypien, Wade Belak, Steve Montador and Todd Ewen among them. Untold N.H.L. survivors disappear into middle age to battle their demons alone.

When the puck and the gloves dropped and the fists began flying at the start of Wednesday night’s game between the Rangers and the Washington Capitals, hockey managed to get itself noticed again, for all the familiar reasons.

It was an old-school spectacle greeted with scattered bits of disgust, nostalgia and excitement. Vigilante justice is part of hockey’s history, and N.H.L. Commissioner Gary Bettman has never seemed interested in removing it from the game. A necessary “thermostat,” he has called it.

Wednesday’s brawls, in a game that featured 141 penalty minutes, were sparked two nights earlier by a pair of ugly acts of violence that the N.H.L. addressed with a $5,000 fine against a Capitals player.

The Rangers issued a harsh protest on Tuesday, and on Thursday they were fined $250,000 for “demeaning” a league executive in charge of player safety. In hockey, apparently, you get $5,000 for roughing, but $250,000 for demeaning.

There are two ways to look at it. First is what it says about the game and its priorities. The other is to worry for Tom Wilson, the instigator in this episode, playing a role that hockey reveres but that does not often end well.

Jody Boogaard, Len’s wife and Derek’s stepmother, said that the Boogaards were among those who regrettably pushed their children into the violent aspects of hockey, not fully aware of the long-term ramifications.

“What boggles my mind now is that everybody knows better,” she said.

Fighting in hockey is not as prevalent as it used to be, perhaps to the disappointment of aging traditionalists. Around the time when Probert and Boogaard died, about 40 percent of N.H.L. games featured at least one fight. That number has fallen by more than half, without much input from the league. The N.H.L. sees it as a natural evolution, happy to point out fighting’s fade without doing much to stamp it out further from within the game.

The era of the one-dimensional enforcer is mostly in the past. Wilson, at 6-foot-4 and 220 pounds, is a bit of a throwback. In his late teens, in his first two seasons of major-junior hockey, he scored only 12 regular-season goals. But he had 212 penalty minutes, for a combination impressive enough to make him a first-round draft pick in 2012, chosen 16th over all by Washington.

Wilson, 27, has evolved into a dependable offensive threat but he is not averse to violent acts.

He was suspended for 14 games for such a play in 2018. In March, Wilson smashed Boston defenseman Brandon Carlo’s face into the glass. Wilson was suspended for seven games. Carlo, injured, returned to the lineup on Tuesday after missing most of two months.

The latest controversy with Wilson began Monday night at Madison Square Garden. With the puck stopped and bodies clogging the front of the Capitals’ goal, Wilson began punching the fallen Pavel Buchnevich in the back of the head. Someone yanked Wilson away and others jumped into the scrum. Wilson threw more punches, then dragged down the Rangers’ Artemi Panarin, punched him and smashed his face into the ice. Wilson smiled and flexed in the penalty box.

The Rangers, incensed that some sort of code was broken, grew angrier when the league on Tuesday handed Wilson the $5,000 fine but no suspension. The team released a statement saying that the N.H.L. vice president George Parros, a former enforcer who leads the player safety department, was “unfit to continue in his current role.”

By fluke of the schedule, the teams met again on Wednesday at the Garden. The moment the puck was dropped to start the game, three Rangers and three Capitals paired off and traded punches — a “staged” fight, the kind that most levels of hockey have tried to kill. There is more honor, or necessity, in fights that combust from the heat of the game than from those planned or predicted, the thinking goes.

The requisite penalties were assessed and the game continued. Wilson appeared on the ice within a minute, to boos from fans, and was quickly accosted by the Rangers’ Brendan Smith.

On the website Hockey Fights, which chronicles and celebrates the occasional spectacle, fans voted on who won and lost.

The N.H.L. has never had incentive to take fighting out of hockey. It remains the only major team sport where players can punch one another in the face, even circle one another like boxers, or start a game with a brawl, and the punishment is usually five minutes in the penalty box rather than a fine or suspension.

The N.H.L., like the N.F.L., has slowly adopted stricter rules against blatant attempts to target the head. It has never said, Dryden has urged, that any blow to the head should be penalized. “No hits to the head, no excuses,” he wrote in an open letter to Bettman.

The easiest hits to eliminate would come from fights, but Bettman views fighting as an outlet to subdue more violent tendencies, like a weary parent sending rowdy kids outside to play to release energy. It is also an approach deemed unnecessary in all other sports.

Len and Jody Boogaard occasionally attend junior games in a mid-level league with players between the ages of 18 and 20 in Yarmouth, Nova Scotia. At a recent game, a fight broke out. Officials stood back as the boys traded blow after blow, the Boogaards said.

“I think Len and I were the only people in the arena who were thoroughly disgusted,” Jody Boogaard said.

The Boogaards did not see Wednesday’s melee at the arena where their son used to play. They stopped watching the N.H.L. 10 years ago this month.

Denial of responsibility! NewsUpdate is an automatic aggregator around the global media. All the content are available free on Internet. We have just arranged it in one platform for educational purpose only. In each content, the hyperlink to the primary source is specified. All trademarks belong to their rightful owners, all materials to their authors. If you are the owner of the content and do not want us to publish your materials on our website, please contact us by email – [email protected]. The content will be deleted within 24 hours.
best sports newsFightingnews update sportsnewsupdateNHLrevealssports newssports update

How matter’s hidden complexity unleashed the power of nuclear physics

Pokemon Go To Receive New Social Features Niantic Has Been…