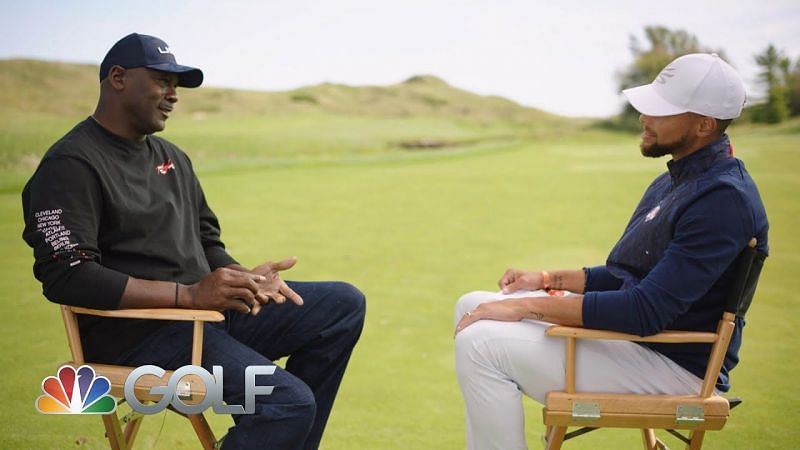 “For a competitive person like me, this is what keeps me sane” – Michael Jordan sits down with Stephen Curry and discusses his love for golf

Michael Jordan and Stephen Curry are two of the most influential basketball players of all time and also two of the most renowned NBA golfers. Curry’s media production house, Unanimous Media, signed a massive talent deal with Comcast NBCUniversal which involved an opportunity to cover the Ryder Cup for NBC Sports.

The Golden State Warriors talisman sat down with arguably the greatest basketball player of all time and just the mere image of the two former MVPs having a discussion was enough to generate buzz on social media.

Any NBA fan would love to eavesdrop on this conversation. One’s imagination runs wild as Stephen Curry and Michael Jordan could discuss a variety of topics, from the NBA and championship parades to life after retirement and their mutual love for golf. However, Draymond Green clarified to fans that they were indeed discussing golf when he commented on the NBA on ESPN’s Instagram post.

“To me, it is the hardest game” – Michael Jordan talks about golf with Stephen Curry

Michael Jordan is one of the most avid golfers in the world. He used to play the sport during his NBA championship days as well and is notorious for being overly competitive. When Jordan retired from the NBA, he naturally navigated his entire energy to golf.

He sat down with two-time MVP Stephen Curry and talked about how spending time on the putting greens keeps him sane. He said:

“I kinda got into golf, mainly because, from a competitive standpoint, to me, it is the hardest game to play. I can always respond to an opponent, a defensive guy, offensive guy, whatever but in golf, it’s like playing in a mirror. You’re battling yourself consistently to try to get perfection. Every swing, every putt. For a competitive person like me, this is what keeps me sane when I walked away from the game of basketball. That was enough to keep my competitive juices working, now when I don’t have that game, this game [keeps me sane]. It used even drive me crazy then. Now I go fishing in between my golf because I’ve got to show patience in fishing and that’s going to be relative to golf.”

When Michael Jordan said that he finds the sport of golf “the hardest game to play,” Stephen Curry agreed, saying “Absolutely.”

Curry is one of the best golfers amongst NBA players. Like Michael Jordan, he too is obsessed with the sport and has said on many occasions that he would have been a professional golfer had he not chosen basketball. Stephen Curry even admitted to thinking about his next round of golf while playing on the court.

Will Gray, a golf writer for NBC Sports who watched Curry play in a Pro-Am event in 2019 said,

“If basketball didn’t exist and he was able to go a full 12 months and just focus on golf, I think he could be competitive on a weekly basis in the pro golf circuit…His game has very few holes, and he’s absolutely legit.”

Even so, the conversation between Michael Jordan and Stephen Curry was limited to golf, at least to what we could see. NBA Twitter was buzzing over their potential topics of discussion. Many suggested they were discussing LeBron James, while a few jokingly suggested that MJ was trying to recruit Curry to join the Charlotte Hornets.

Denial of responsibility! NewsUpdate is an automatic aggregator around the global media. All the content are available free on Internet. We have just arranged it in one platform for educational purpose only. In each content, the hyperlink to the primary source is specified. All trademarks belong to their rightful owners, all materials to their authors. If you are the owner of the content and do not want us to publish your materials on our website, please contact us by email – [email protected]. The content will be deleted within 24 hours.
Basketballbest sports newsChicago BullscompetitiveCurrydiscussesGolden State WarriorsGolf