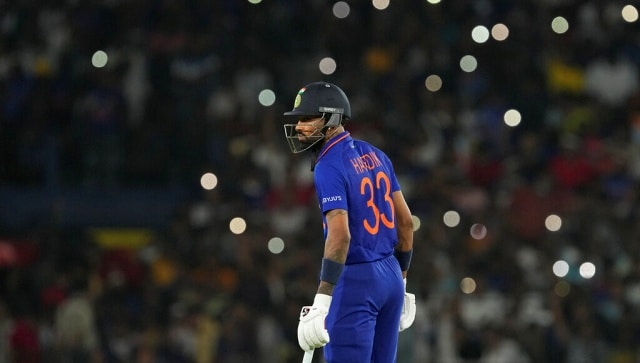 Amit Mishra said Hardik Pandya could well have flown a plane with low fuel and faulty engine in a thunderstorm and could have still managed to land it safely.

Hardik Pandya accelerated towards the end to give the Indian total a much needed push. (Source: AP)

Former India leg-spinner Amit Mishra has been a vocal presence on social media and he comes up with hilarious takes and good analysis post every India match. In the third T20I, India were powered by a late flourish by Hardik Pandya as the hosts posted 179 in their allotted 20 overs.

However, this innings came with its own share of luck as the right-hander was dropped by his Gujarat Titans teammate David Miller when he was batting on just 1. It was the third ball of the 15th over as left-arm wrist spinner Tabraiz Shamsi tossed up a googly outside the off stump. Hardik wanted to launch it over long on, but the ball gripped and turned just a touch and it took the leading edge and flew to David Miller who charged in from long off, but failed to hold on to a relatively easy catch.

This was the reprieve Hardik Pandya wanted as he added an important 31 not out as India posted 179 for 5 in their 20 overs. He had other strokes of luck go his way during this stay as he managed to get a couple of lucky boundaries as India found the desired momentum in the final few overs.

Talking about this innings and making a note of Hardik Pandya’s fortune, Amit Mishra said that the all-rounder could well have flown a plane with low fuel and faulty engine in a thunderstorm and could have still managed to land it safely.

“Hardik Pandya is so lucky today that he can fly a low-on-fuel plane, with a faulty engine, in a thunderstorm and yet can land it safely to the destination,” Mishra tweeted.

On a sluggish pitch, the Indian bowlers – especially Yuzvendra Chahal, Axar Patel, and Harshal Patel found their mojo as South Africa were knocked over for 131. Harshal led the charge with a 4-wicket haul, while Ruturaj Gaikwad was the star with the bat with a superb 57.

Denial of responsibility! NewsUpdate is an automatic aggregator around the global media. All the content are available free on Internet. We have just arranged it in one platform for educational purpose only. In each content, the hyperlink to the primary source is specified. All trademarks belong to their rightful owners, all materials to their authors. If you are the owner of the content and do not want us to publish your materials on our website, please contact us by email – [email protected]. The content will be deleted within 24 hours.
best sports newscricketersFirstcricketFirstpostHardikIndiaNewsnews update sports

How about a regal gold iPad Air 2 as a last-minute Father’s Day gift for just $240?